Should you be a Good Chinese Wife?

Please enjoy this excerpt from 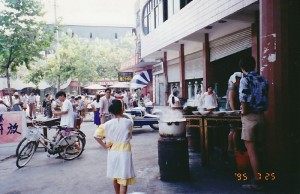 The Chinese University of Hong Kong sits atop a mountain, north of Hong Kong Island and twenty minutes south of the mainland China border. When I arrived on campus in 1990 for a college exchange year, I had imagined Hong Kong would be a city of skyscrapers and neon. But the only lights around the campus came from the occasional barge or leisure boat in otherwise quiet Tolo Harbour. On the weekends, the campus was almost deserted. Local students returned home to their families, and the few overseas students studying abroad left for the bustling expat areas of Kowloon and Hong Kong Island.

Upon my return for graduate school years later, new residential skyscrapers had popped up across the harbor. The campus was beginning to look like what I’d first imagined. But the most significant change on campus was that the mainland Chinese population had blossomed from a handful of people to about two hundred graduate students. I was fascinated by these newcomers and their alluringly mysterious culture, so utterly different from my own.

On one of those still-­quiet Saturday nights, a month after I started graduate school, I locked myself out of my dorm room. I was on my way to call a friend, using the hall phone around the corner, and as soon as I closed my door, I knew I had left my key on my desk. My roommate, Na Wei, hailed from Harbin in northeast China, but she slept in her boyfriend’s single room most nights and only returned to our room during the day when she needed a change of clothes or a short nap. So no luck there.

Then it hit me. The guard downstairs kept spare keys. I could borrow one from him.

My stomach fell when the elevator opened on the ground floor. The lobby was empty. I inched over to the guard’s desk to read a tattered white sign perched upon it. Although I couldn’t speak the local Cantonese dialect, I had studied Mandarin, the official language in mainland China. With five years of Mandarin behind me, I could almost make out the meaning of the Chinese characters on the sign: if, need, something, and return. But one character came up as a blank. If you need something, I will return blank.

If only I could read the one character describing when the guard would return. I usually got around Hong Kong without having to resort to my little, red Chinese-­English dictionary. Now, the one time I needed it, it was locked away in my room, not far from my coveted key.

I decided to take a seat on a vinyl bench near the front door in case someone came by who could translate that mysterious character. Worst case, I would have to stay up all night until the daytime guard arrived.

And that would indeed be the worst case for me. Other than on long international flights, I had never pulled an all-­nighter. I was the type of college student who worked ahead to avoid cramming all night before exams or writing a paper the night before its deadline. Thinking about the daunting prospect of a lobby all-­nighter, I looked up, startled, as two men and a woman suddenly entered the building.

Cai immediately caught my attention. Like a movie star, he stood six feet tall with confident eyes and an infectious smile. His hair was cut in the popular Hong Kong men’s wedge of the early 1990s—­longish on top, tapering down to almost a crew cut a few inches above the neck. He carried himself with the self-­assurance of someone used to drawing admiring glances. He looked striking in his stylish brown corduroy pants, short-­sleeved shirt, and hunting vest, but I couldn’t place his nationality. Based on his more sophisticated appearance, I figured he was from Taiwan, or maybe an overseas Chinese from Japan or another developed country.

His friends, however, weren’t so hard to identify. The shorter man wore an olive business suit with the white label still stitched to the cuff, and the woman was dressed in a long, striped polyester skirt and a mismatched floral blouse. Definitely mainland Chinese.

On my first trip to China in 1988 with a group from high school, I had noticed this eclectic fashion trend. Up until the late 1970s, fashion in China consisted of simple “peasant pajamas” or “Mao suits.” In the years after the Chairman’s death, people started to experiment with colors and patterns, including bright stripes and flowers. So this distinct mainlander fashion was easy to recognize in stylish Hong Kong.

Once Cai’s friends turned toward the elevator, I knew I had to act quickly before he left the lobby and I had to face my all-­nighter again.  “Excuse me, can you read this sign?” I hurried after Cai, speaking in English. No answer. Oh God, what if he only knows Cantonese? I thought. But I was determined not to sit on that bench all night, so I repeated my question in Mandarin as I felt a pearl of sweat trickle down my neck.

Cai glanced at the sign and said nonchalantly in Mandarin, “Tā jiù mashàng huílái.” He will be back soon. His Mandarin was clear and articulate, without the slurring of the northern Chinese accents.

“Oh, thank goodness! I locked myself out and need a key,” I explained to this attractive, well-­spoken stranger, stumbling in choppy Mandarin. The relief I felt, knowing that I wouldn’t have to camp out in the dorm lobby all night, seemed insignificant compared with my sudden desire to know everything about him. I needed to find a way to prolong our conversation.

“Méi wèntí.” Don’t worry. He nodded slightly, as if locking oneself out happened all the time.  “Actually, I need to buy a phone card from the guard.” He went to sit on the bench I had just occupied. I couldn’t believe my luck.

We hope you enjoyed this excerpt from