Blue Like Desire: An excerpt from Love At The Speed Of Email 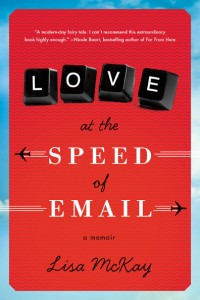 In Love At The Speed Of Email, two humanitarian workers defy the uncertainties of distance and the isolation of working in some of the world’s most remote and challenging corners to build a long distance relationship entirely via email. As they risk love, the narrator struggles to better understand the legacies of her nomadic childhood and find a satisfying answer to that simplest of questions, “where’s home?”

Love At The Speed Of Email recently received an Honorable Mention in the prestigious and competitive Writer’s Digest Self Published Book Awards.

This excerpt is drawn from the first chapter, Spinsters Abroad, and explores an encounter common to many Western travelers…

I was sitting alone at dawn on a cold metal bench in Accra airport, reading, when he sat down beside me.

He was tall – that was the first thing I noticed. Easily six-eight, he towered over everyone else in a room that was already full of tall men. His skin was so shiny black, like oiled coal, that the fluorescent light glanced off him at odd angles. His hair was sectioned and bound into a dozen spiky knobs. He wore spotless red and white Nike exercise gear and sported an enormous square diamond in his left ear. He pulled out a portable DVD player and slid in a disc.

He waited longer than most, four minutes, before striking up a conversation.

I looked up from my book and sighed mentally.

“Where are you going?”

“I run workshops on stress, trauma, and resilience for humanitarian relief and development workers.”

I could see that this last sentence didn’t register, and I wasn’t surprised. It usually took some time for native English speakers to fit those pieces together, and Gabriel spoke English with a thick West African-French accent.

“What do you do?” I said, wondering, as always, what was compelling me to ask this.

It’s not that I wasn’t interested in what he did – I was especially curious as to where the diamond came from. It was just that I didn’t particularly want to end up chatting at length to yet another strange man in an airport in Africa. But no matter how many times I tell myself that I’m not responsible for reciprocating interest in situations like these, it breaks all the normal rules of polite behavior to give a one-word answer to a question and return my eyes to my book. Five questions is about my limit. After that I usually buckle and return one.

I learned that Gabriel was a seaman, working cargo ships out of Djibouti. His family was from Cote D’Ivoire but now lived in Ghana. English was his fourth language, and his worst.

“Are you married?” Gabriel asked me. “Do you have a boyfriend?”

This is why I don’t enjoy chatting with men in airports in Africa.

“I have a boyfriend,” I lied shamelessly.

Gabriel did not even pause. This was something I’d noticed with other men, too. Apparently, if my boyfriend was allowing me to wander around Africa unsupervised, I was fair game.

Flummoxed, I tried to think. Answering no was out of the question. Answering yes was tantamount to an open invitation to continue this line of questioning.

I recalled the face of an ex-boyfriend and mentally grafted it onto my hypothetical current boyfriend.

“My boyfriend is black,” I said.

Gabriel smiled. “I like to make friends with the white woman.”

I looked down at my book and turned the page.

I have received more attention from men in Africa than anywhere else in the world. Most of the time, however, I don’t think it’s because of my sparkling personality. How sparkling can you be when you’re travel-weary in an airport, especially when you’re engrossed in a book? But I’m also not deluded enough to think that these propositions come because of any irresistible physical magnetism I am exuding. Most of the time, I get the sense that when these men look at me – my hair, my eyes, even my skin – what they really see is not brown and white but blue.

This sometimes bothers me. And the fact that it bothers me bothers me, too.

My parents spent decades trying to teach me that it’s qualities other than beauty that really matter. I’d say I believe that. Why, then, do I catch myself at times like these preferring that someone approach me because he desires me physically than because he desires my citizenship and all the other qualities it represents – escape, freedom, and relative wealth? After all, physical beauty and citizenship are both, to a large extent, assets bestowed on us as accidents of birth. Objectively, citizenship even has some major advantages over beauty – it tends not to depreciate in value over time, and you have to screw up really badly to lose it altogether. Physical assets, however, are subject to degradation caused by any number of things, like gravity, sun damage, neglect, and the overconsumption of ice cream and takeout Chinese food.

“Do you do lots of travel for work?” Gabriel asked me suddenly, interrupting my concentrated study of page 231.

“I travel lots, too, but when I get married I will stay at home with my wife and our children,” he said, clearly hoping I would take the hint and apply for a starring role in that story line immediately.

My strategy during these conversations is to be reserved but polite. Rarely will I be confrontational and firmly shut someone down. Sometimes, however, I will run away.

I dug for the last of my Ghanaian Cedes and headed for the small stall selling bottled water. Then I wandered into the one store in the airport, thinking.

It’s not that I blame the men for trying, I don’t. I even admire their moxie sometimes. It’s more that I hate the way it makes me feel defensive and objectified when I suspect that I’m simply being seen as a walking one-way ticket to wealth and a better life. But why should I feel any less objectified, or any more flattered, by a man looking for a pretty smile and a tight shirt?

“Perhaps,” I thought as I stood alone in the airport on that sultry morning in October, “I’ve been coming at this all wrong. Maybe my parents are right. It is other qualities that matter more than beauty – it’s my passports. Maybe I should start seeing them as just as tangible (and more indestructible) assets than my cup size.”

Behind me a voice called my name.

I turned and looked up. Gabriel had come to find me, to make sure I’d heard that they had called pre-boarding. He pressed a piece of paper containing his phone number and an email address into my hands.

“Then again,” I thought, “maybe I should just invest in a fake wedding ring. Call me demanding, but I need someone to be drawn to my passports, my pretty smile, and my personality.”

I smiled, awkward, and tucked the slip of paper into my bag.

“It was nice meeting you, too.”

Lisa McKay, her husband, and their two young sons, currently live in Laos.

Not by Bread Alone: What Moves Your Spirit?
Chile: My Worst Food in the World
New Page: Most Recommended Travel Apps
Adventure Matters: Sometimes You Have to Eat It to Save It!

Lisa McKay, her husband, and their two young sons, currently live in Laos. She is an author and mother as well as a psychologist. Her book, Love At The Speed Of Email, was released in 2012.