Benin Republic: A Trip to Cotonou 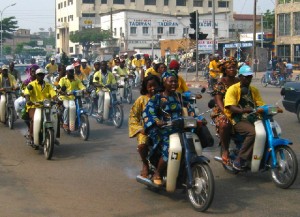 Introduction Cotonou is the commercial –hub city of Benin Republic , a French speaking country in West Africa, south of the Atlantic. It is a cosmopolitan city with a sizeable number of residents as foreigners in the city. It has a well structured network of roads built up to international standards comparable to any modern roads in the world today. The city has been in existence since 1845 being a French colony of West Africa-formerly called Dahomey.

The People The locals constitutes mostly the Egun tribes who also inhabit Seme and Badagry on the outskirts of Lagos Nigeria. Nigerians top the list of foreigners in the city, strategically doing business with their ports facilities. Other Nationalities there includes; the Chinese, Pakistanis, Lebanese, Indians, Ivorians, Senegalese amongst a host of other nationalities.

The locals are warm and friendly. Their houses is not as ‘fenced’ and ‘gated’ as in Lagos –the neighbouring city which is the formal capital city of Nigeria. The women are hardworking, but could be loose. The men like drinking a lot. Recently , the association of the men with foreigners helped them a bit to be more responsible and are taking serious government duties and jobs in the private establishments.

The Places Cotonou has a lot of hotels built by foreign businessmen . There are from two stars to five star hotels in the city depending on ones tastes and income. The restaurants are plentiful and neatly arranged. It has an airport, a seaport, a stadium and the ultramodern Topa market which is reputed to be the largest in the country.

There are also local and international educational institutions within and on the outskirts of the city. Roman catholic cathedrals doth the landscape and contribute a lot to the architectural masterpiece of the city. Although, many of the people still have Voodoo as their private official Religion-one still finds Voodoo Temples scattered here and there, which are also a great tourist attraction, if you want to see.

Cotonou is a cool place to Live or Visit I must confess, in all my travels in Africa, l can say with all confidence that Cotonou is the place that has kept to its own original city-master plan, without the need of the government coming to demolish so many illegal buildings here and there. The city is quite cool and quiet. Electricity supply is constant, thus you cannot here the sound of a generator there.

This is unlike the neighbouring city of Lagos, where by the cacophony of noise generated by sounds from this device, both day and night could be deafening. As a matter of fact, noxious fumes such as carbon monoxide from these generators has been a notable cause of asphyxiation to a good number of people in this neighbouring state(Lagos) but unheard of in Cotonou.

Business, commerce and recreation are thriving in Cotonou. The port-city is where one can unwind and at the same time make good money without any stress or hassles . Crime rate is one of the lowest in the world- people hardly have gates or barbed wire fences covering their buildings.

She has for her pride, one of her own, the London based songstress and diva, Angela Kidjo who doubles as a UNESCO Ambassado (United Nations Educational Scientific and Cultural Organisation). Her pictures in Billboards adorns the city landscape also.

Conclusion Cotonou is a lesson for what Urban city development should be in Africa, it is a place you feel free and would love to visit over and over again.

About the Author:  My name is Bede Adazie. I was born some 35 years ago. I am currently a Volunteer teacher -with the Lagos Eko Projects Volunteers Teacher’s Scheme-and also doing some homeschooling for students in Mathematics/Sciences. Find Bede Adazie on Twitter and Facebook.

2 responses to “Benin Republic: A Trip to Cotonou”