The wind whipped across the plains, covering camp with yellowed dust. We quickly made breakfast, packed and soon set out over the flat ground. The earth was deeply cracked and extremely dry. In the cracks and below where we trod rested the Inland Taipan, perfectly adapted to life in the most extreme conditions. A large part of their diet is the Long-haired Rat, a formidable prey item with immense incisors that also inhabits the same cracks. Taipan numbers fluctuate with the rat numbers, more rats means more snakes. 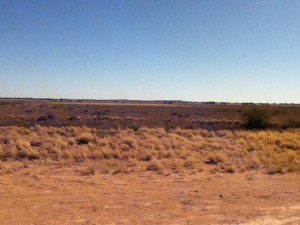 It came as no surprise why their venom had to be so potent, if they lost a meal or became injured in acquiring it death could be near. They needed to subdue their prey quickly and painlessly. Taipans are very shy and rarely encountered and even though they possess the most toxic venom of any land snake, there are no reported human fatalities.

We walked for close to two hours, searching the ground all around us. The wind began to pick up more and more and although it was extremely sunny, the breeze cooled everything down. There would be no Taipans. We turned, quite begrudgingly, and headed back to the ute.

The road back to Windorah felt exceptionally long, the straight highway endlessly swept to the horizon. Huge Wedge-tailed Eagles slowly and reluctantly flew from their easy meals of Red and Gray Kangaroos, Wallaroos and Emus, casualties of enormous road-trains, semi-trucks hauling up to four trailers, that stopped for nothing. 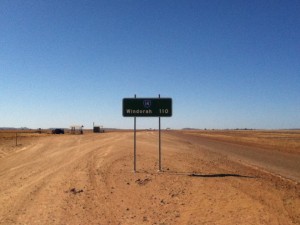 Windorah, with a population of less than 200, was a town that if you blinked, you would miss it. The caravan park was full of gray-haired vagabonds, retirees taking to the roads in oversized mobile homes. They stretched their traveler’s wings, even though there wasn’t much else that would stretch. I smiled as an old man shuffled ahead of me to the bathroom, I hoped I would be as adventurous in my golden years.

We washed up and went to one of the only restaurants in town, the Western Star Hotel. The hotel site dated back to 1878, but now it is home thirsty townsfolk and passing travelers. Faded bumper stickers from all around the continent clung tenaciously to every available surface. There were only four beers on tap, plenty of spirits on the shelf and a few disinterested bartenders with Irish accents. MTV played on the small TV above the bar.

The oversized hamburger and hefty portion of fries I ordered sat splendidly in my stomach after a week of living from cans and bread. Two cold beers, a game of darts and a game of pool later, Lockie and I thought we should try our luck on the sand dunes just out of town.

The sun had been down for an hour, but the dunes were still warm. The sand was a brilliant shade, just between red and orange and dotted with spinifex. Various species of dragons and geckos inhabited the tussocks of grass emerging at different times to find little insects. We startled four cows grazing on the dune and they ran away in a kerfuffle. 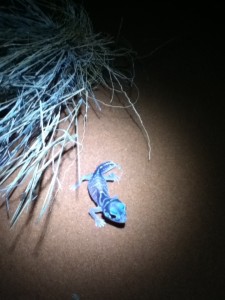 As we turned a small gecko shot out from one spinifex bush and rushed to another. It floated over the sand, leaving a tiny set of tracks in its wake. Lockie grabbed it just in time. It was tiny with big bug eyes, a V on the back of its neck, spindly legs, a big smile and fat tail. The little lizard was a Smooth Knob-tailed Gecko and lives deep in the spiny spinifex on the dunes.

We took a few photos then let the gecko go back to its night-time excursions and headed back to our camp in Windorah. We drifted to sleep as the cows in the nearby paddock bellowed. 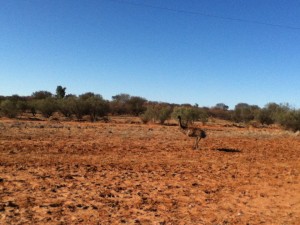 The next morning proved too windy as well. We loaded our gear back into the ute and headed back to the Sunshine Coast. It was strange returning to the coast after all our adventures. We set out in search of two incredible reptiles and returned with one marked off our list. We experienced the harsh realities of the arid interior and gained a greater understanding of those animals and people that call it home. I couldn’t wait to return.

About the Author: I’m Hunter McBryde and I am a zookeeper with a passion for reptiles. I currently live on the Sunshine Coast in Queensland, Australia, but I’m originally from Pennsylvania. I love the freedom of getting lost in nature and the excitement of a roadtrip. Special thanks to Lockie Gilding for organizing the trip and many of the photos!

The Truth About Travel to Egypt
Hong Kong: Kowloon Walled City Park
Crocodile Love: A Tale of Volunteering and Travel Around the World
How I Tried to Fall in Love with Rome