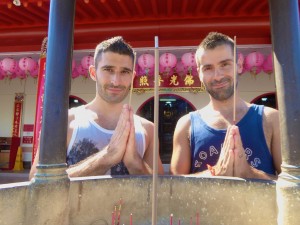 1- Where was the first place that you traveled that made you think WOW—travel is amazing (think history book come to life or …..)

Stefan first got bitten when he was old enough to leave the nest and not travel with the family. He was 18 when he first backpacked and started his travel experiences inter railing around Europe with friends and later took a gap year in between university and starting law school in 2005 to volunteer and backpack his way around South America.

Sebastien always had a dream of being whisked away from his hometown in France by a Latin lover to exotic locations far far away. He came to London initially to improve his English in 2006 and stayed for a few years. In 2009 he was so set on moving to Spain or Latin America to find said Latin lover, but he instead met Stefan. Initially Sebastien thought Stefan could be this Latin lover, but he turned out to be a Greek (which was still ok) with a strong British accent (hmmmm…!)

Together we started travelling extensively around Europe and then further afield to Thailand and Japan, which we fell in love with. This inspired a more long term travelling dream and our Nomadic Boys blog was born. 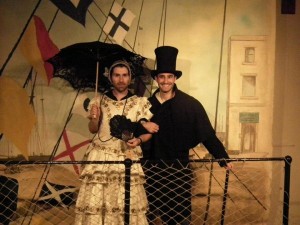 2- If you had unlimited resources, where would you go and what would you do?

Back here on Earth, Stefan’s ultimate dream is a white wedding in Antarctica and for Sebastien a road trip around North America.

3- What were you afraid to do and how did you find the courage to overcome it?

The very decision of leaving our careers, lives and belongings in London for a life of long term travel was a huge step for both of us and at first we were extremely tentative and anxious about this.

We always talked about it, but in 2012 decided to make it a reality and started a strict saving plan, 2 years later we were ready and left in June 2014.

Putting aside the money fears, we were also worried if we could even tolerate each other so intensively every day? But now after 17 months travelling in Asia, we have become almost inseparable. It has certainly strengthened our relationship in so many ways. 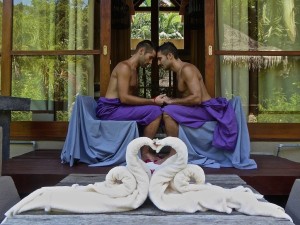 4- What apps do you use regularly that make your life easier?

We love meeting locals in our travels as that is the best way to see a place. In Asia, most countries are seriously backward with their LGBT laws so in some places like India, Sri Lanka, Myanmar etc there is no “gay scene”. So, to seek it out, you need to turn to apps like Grindr. We are not in an open relationship in any way and do not use Grindr for finding sexual partners (which is what it is predominantly for in Western Europe), but from a networking point of view, it has been our single most valuable resource to meet local gays in our travels.

As a result we have developed a deeper understanding of the places we’ve visited through the eyes of a gay local and seen a glimpse from their point of view of what life is like for them growing up in their country. We’ve recorded all these stories and conversation in the Gay Voice section of our blog. 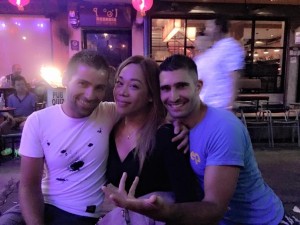 PHOTO Sebastien Regina and Stefan having a drink at Balcony gay bar in Silom, Thailand, February 2014

5- What place do you wish more people have seen?

We both agree Mongolia. It is absolutely stunning with some of the most incredible scenery you will ever set eyes on. The Tsagaan Suvraga mines in the Gobi Desert for example look like you’re walking on the surface of Mars. Truly stunning. 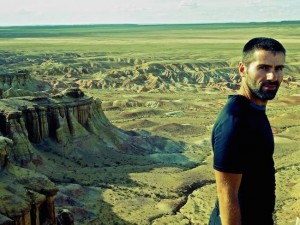 6- Best advice you have been given and by whom?

Just before leaving on our big Asia trip, Stefan’s sister Natalie told us: “Just do it – go for it. You only have one life, so make the most of every single moment!”

7- When were you surprised by the kindness of strangers on a trip?

Always! Get this – our camera, our baby, we forgot in a taxi in Yangon on the way to the airport. We realised this much later of course when we arrived in Bangkok. But we contacted the hotel we stayed at in Yangon and sure enough, the taxi driver found our camera, took it to the hotel and the hotel staff arranged for the camera to be brought to us via one of their guests who was flying from Yangon to Bangkok. We were extremely humbled and pleasantly surprised to see our baby again!

8- What inspired you to travel for extended periods of time or live in a new country?

Our lives in London started to become repetitive and routine. We both had a very comfortable lifestyle but it was same same every day. When we hit our 30s, we started to question what we wanted from life and travel was high on both of our list.

We love the idea of networking and interacting with a group of like minded individuals. We each share the same drive and passion in life and Zipkick is an awesome way to unite us and grow together. 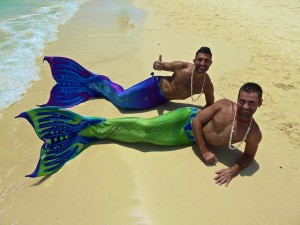 We are Stefan and Sebastien, gay couple, who quit our jobs and lives in London in June 2014 to eat our way around the world. We’ve been traveling in Asia ever since. Stefan is of Greek Cypriot origin, born and raised in North London, Sebastien is from Lyon in France.

NYC: How to be a tourist in your own backyard
A Taste of Immortality - Part 4
Yosemite National Park
Have you had Unexpected Consequences of Love?

One response to “Zipkick Bloggers: Stefan and Sebastien from Nomadic Boys”