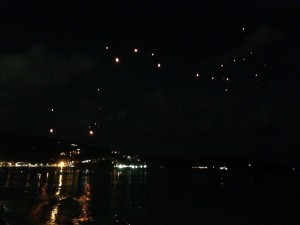 Silly, I know, but in the midst of my Thailand dream vacation – I felt trapped. After a single night in the bustling epicenter of Bangkok and a plane ride that left me feverish and exhausted in Phuket, I wanted a little peace and quiet a lá those glossy travel magazine covers featuring a single beach chair planted in the sun-warmed sand, facing the seam where the sky kisses the water at the horizon. Instead of relaxing, my first 24 vacation hours consisted of obsessively rehearsing warnings from caring friends about local scamming techniques and identifying them: the taxi driver who drove around in circles to raise the fare, the bartender who claimed she received a $500 instead of $1000, and even the sweet-looking lady at the fruit stand who purportedly charged everyone 25 baht per rhambutan. During that first day I only became steadily more paranoid and miserable.

I often felt like a fish swimming upstream with bodies pressing against me on all sides. I became overwhelmed by my thoughts combined with the sensory input zooming towards my brain via my every neuron– pungent smells of people mixed with the heat spiraling up to my face from skewers sizzling on grills, bodies brushing past (a reminder to loop my hand through the purse strap that was already secured around my shoulder), obsidian scorpions waiting to be eaten on shiny platters, and vendors peddling various wares with shouts of “[Object], [X amount of baht], You! Come Here!” My brain switched to survival mode, moving my thought function down towards the brain stem, amping up my epinephrine level so that I could flee the city and seek refuge on the beach with celebrations of Loi Krathong and Yi Peng. After I bought a round krathong with folded banana leaves and stunningly blue orchids, I felt like Indiana Jones with my treasure in hand, plotting an escape; my escape route included lots of instantaneous weaving, but I dodged all obstacles such as rampant charging mopeds and the slanted water drains that could easily twist an ankle.

When my friend and I emerged from the throngs of people at the beach entrance, the world changed. We veered beyond the restaurants with Lady Gaga blasting on overlarge speakers towards the bottom of the beach where the waves crashed into shore bringing in flowery debris and tumbling sand and tiny butterfly coquina shells back out to sea. Wonder crept back into my being as I spotted a girl no older than seven delicately scooping sand into mounds and solemnly rearranging the candles of her mini shrine. My faith in humanity was restored when a group of locals helped to light my krathong with a Zippo and wished me luck as I clutched my skirt in hand and waded out into the sea, sending away my troubles on the beautiful float while thanking Mother Earth for her liquid bounty. I enjoyed the camaraderie amongst strangers as chatter of all different languages bubbled up as we all helped to ensure that each lantern would reach its destination, gently wafting into the sky. Like any sentient being I winced when a burning lantern came close to my face, but I sincerely delighted in the joyful laughing that ensued as a rogue lantern took a dive into the crowd. The hope and solidarity were tangible.

We bought a few traditional lanterns, white cylinders, and stood across from each other holding the edges of the lantern as it began to fill with hot air from the flame at the base of the balloon. The warmth at the tips of our fingers grew until we simultaneously raised our outstretched arms skyward, and we were congratulated with the sight of our lantern effortlessly rising, catching the breeze and following other lanterns on the same air current, joining the caravan of dreams. The lanterns made a staircase to the stars, drifting upwards to greet the sumptuous full moon and ascending to graze the heavens.

The vastness of the sky and shoreline were humbling, sheltering hundreds of people gathered to bear witness to the light puncturing the darkness: dotting the ocean, emanating from the faraway city, spreading across the sky in lanterns with the stars merrily twinkling and presiding overall. My friend and I wandered towards the far side of the beach where all the sounds became hushed in wake of the waves. A special red heart lantern was set adrift and drizzled down fireworks, a glittery trail of silver and gold that sparkled down into the boundless body of water below. In the unobtrusive shared solitude with my friend I felt refreshed, completely overtaken by a sense of awe as I hugged my arms around my knees while the waves crept ever closer during those minutes that stretched into eternity.

About the Author: Alison Roberts frequently penned stories in her formative years, developed a passion for creative non-fiction in high school, tinkered around in the Communication Arts department, and graduated from the University of Wisconsin – Madison in 2012.  Ms. Roberts did not jump on the bandwagon to grab a 9 – 5 job; instead she is on scholarship studying Mandarin in Taiwan.  When she is not in class, she is generally happier because she gets to galavant around Asia, synthesizing her experience through essays that are occasionally snarky, occasionally philosophical and much more sincere than she can verbally convey.

Where in the World are Lisa and George?
The Red Baron: the Story of a Luxury Junkboat in the Gulf of Thailand
Charm of Chiang Rai, Thailand
USA: To spend a night in Reno

One response to “Alight in Thailand”