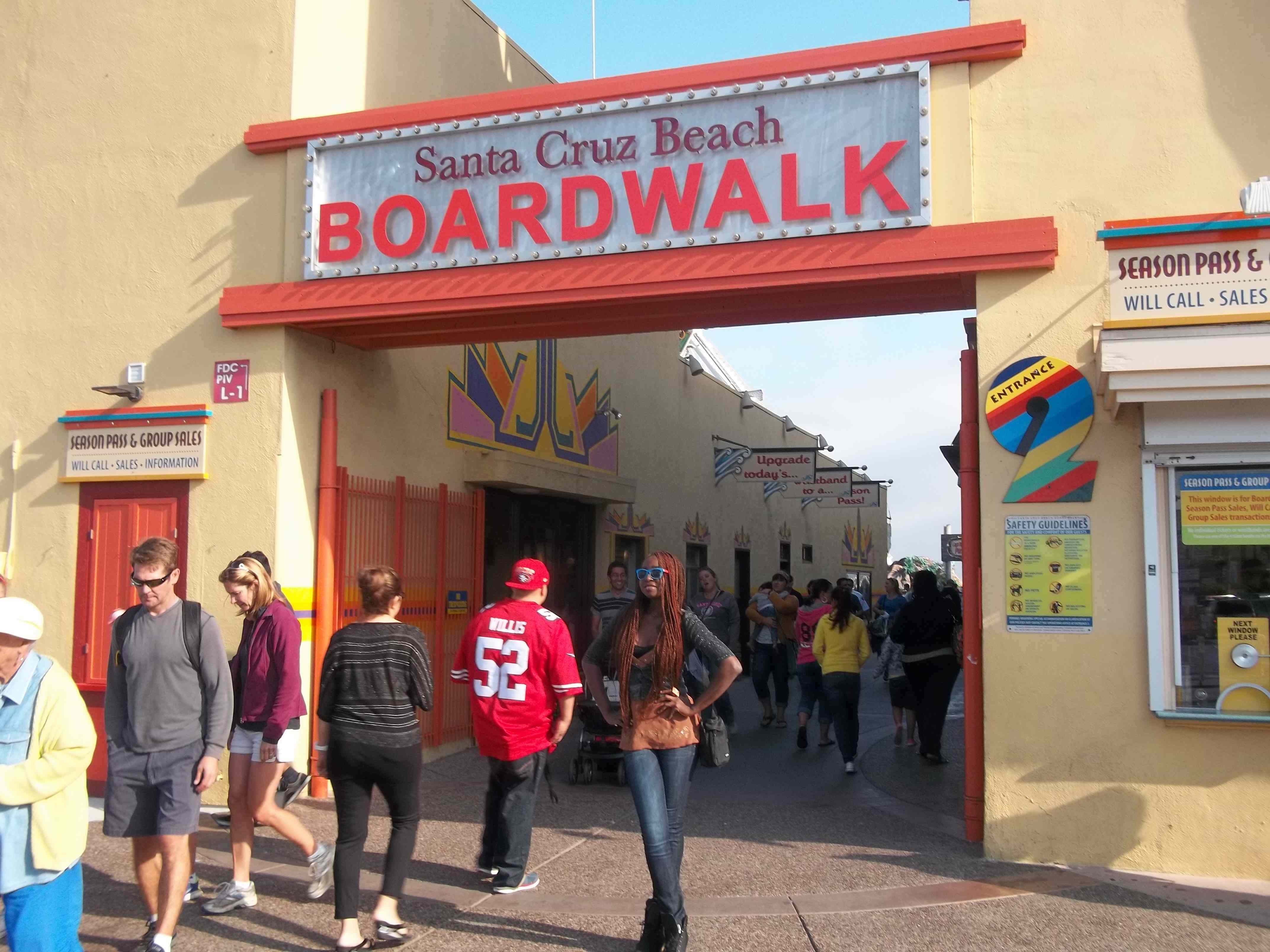 We slowly made our way into the park in Jeremy’s dashing Toyota Prius. We were welcomed by a huge white board with the inscription “Santa Cruz Beach BOARD WALK” at the entrance. I took a picture in front of the sign, striking a very fashionable pose with my feet crossed over the other.

My excitement matched Jeremy’s, even though he had already visited the amusement park severally. He bought the best caramel apple synonymous with the Boardwalk. I bit into it and my tongue had to wade through the yummy gummy caramel before I could get to the scrumptious apple. Giant Dipper was our first ride “It is a National Historic Landmark, a giant wooden roller coaster” He explained dipping his hand into the popcorn bag and gathering a fistful. My fear of heights made me initially concerned about the safety of the ride but his enthusiasm rubbed off on me and I relaxed.

The queue at the Giant Dipper was long, while waiting we played a little game. Jeremy told me to look out into the crowd and pick a guy I wouldn’t mind dating. It was fun trying to find a boyfriend from a sea of nameless men. It finally got to our turn, I got into the first row and Jeremy sat beside me. I held onto the restraint as the train departed the station and immediately entered the tunnel, it slowly climbed the 70 feet and I just knew I was in for a big scream. As the train dropped, I squeezed my eyes tightly shut, bent my head and screamed at a very high pitch that even an opera singer would definitely envy. I nearly passed out. I think my heart got displaced because I felt something drop to my laps. It was exciting and very scary at the same time. I had no idea when the ride ended, it was Jeremy who gave me a gentle pat and I opened my eyes. I discovered that my displaced heart was actually my glasses on my lap.

He was already looking forward to the next ride, “This will make you philosophical because you will have all the time in the world to think while sitting on your head” he said. There was no point of taking his claim with a pinch of salt; by this time I believed that even a launch to the moon was possible. There was even a longer queue at Rock-O-Plane. It was as if the more daring a ride was the more endearing it seemed to people. We climbed into the little cage, after being firmly strapped in, a lady locked us in. We rocked and rolled as the ride gathered sufficient momentum, our seat flipped upside-down and I was hanging at the top defying gravity. I had no idea initially that Jeremy could control our movement because we stayed in that position for some time and then he locked our seat at crucial angles during the revolution. The ride became more intense in the erratic spin. When I realized that others were not moving at the same pace with us and observed the glee on Jeremy’s face from an awkward side glance, I begged him to stop. It was funny watching the world from an inverted position. I could see about a thousand heads waiting impatiently for their turn and a beautiful ocean view. “Was it mind-blowing enough?” Jeremy asked me after the ride, “Awesome” I replied. The best things in life are sincerely enjoyed when you are with someone who is eager to enjoy them with you.

Loggers Revenge was a nice relief. I felt like a cartoon character in the tree-trunk canoe with a big hole in the middle .I sat in front while Jeremy sat behind me. We floated up a watery track and I drank in the rich panoramic ocean view. There was no tension; instead I took pleasure in the sheer aesthetics of nature: water, earth and sky. A pool of gratitude formed in my heart and felt my valves give way for its distribution to every fiber of my being for this unique opportunity to be here with no worries about the past, present or future. I kept anticipating the final drop but when it came I was totally unprepared and enjoyed the wetness!

It was eight pm; the sparkling lights of the boardwalk were more noticeable in the dark. I could not see faces clearly but my nose was not oblivious to the distinctive aroma of corn-on-the-cob grilling somewhere. I could imagine its sweet taste but I was just too full to squeeze in any more delicacy.

As we left the park, I felt entirely grateful to Jeremy, my dear friend and host through him I experienced a perfect blend of a true California experience and the thrills of a classic amusement park.

About the Author: Queen-Esther Egbe is a Nigerian writer who loves traveling and writing about it!

Do You Want To Be A Travel Photographer?
Bradenton, Florida: Ain't Nothing Like the Real Thing
Top Ten YouTube Travel Videos on WE SAID GO TRAVEL
Am I a Real Entrepreneur? Firing the Fraud police

One response to “My Santa Cruise”