A Place I Love – Inside the Heart of Bruges

Inside the Heart of why I Love Bruges.  Ever since I watched the movie ‘In Bruges’ I’ve always wanted to visit the town itself. Fairy tales are part of most people’s childhoods because of what we watch on TV, or read in books. Most of us have an idea of a stereotypical Fairy tale. It could be how we experience them in an ideal situation such as the perfect wedding or romantic reconciliation. In this case it was the surroundings and way of life that made me think that this was a Fairy tale town. It was almost like a Disney movie, nothing went wrong for too long.

This trip was a road trip, a new place and it actually signalled the beginning of travelling in hostels for me. Our adventure elapsed from late December 9th 2012 and concluded back at home Monday the 12th.We arrived in Belgium on December 10th around lunchtime after a 10 hour journey, 5 hours through empty motorways from the North to South England, followed by a 5 hour mundane and sleepy ferry ride. 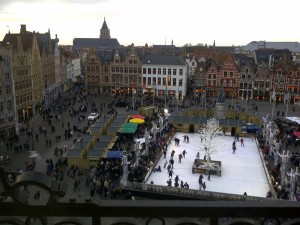 We got to Bruges in the early afternoon. Christmas time was in full flow, decorations in shopping windows, market stalls with themed toys and bakeries traditional Christmas characters.  The ice rink was out and in full access with locals skating around in enjoyment.  We wondered through the alleyways then arrived to our first hostel. I decided to stay in 2 hostels, so I could experience different areas and to indulge with more people.  The first hostel we stayed at was St Christopher’s Inn Hostel; it had a few backpackers there and had numerous rooms full of dorm beds. We checked in. It was now late afternoon so food was calling along with some White (Blanche) beer I’d heard much about. We went to a place called Bar Salon, socialised with some Flemish locals.  The surrounding Grote Market aka Markt Square was alive with people. It was a floating sort of atmosphere, a cool breeze and it had a clear feel to it. That night was pretty short, it was spent most from taking it all in. That first visual you get of a new place, the novelty, everything seems just colours and shapes, well we focused on concentrating our eyes on adapting  these new colours and sights into places we could remember.

The first image of the morning woken in my dorm bed was of my important belongings. A typical needs for a backpacker I guess.  I remember waking up feeling I only needed these items and I was set. 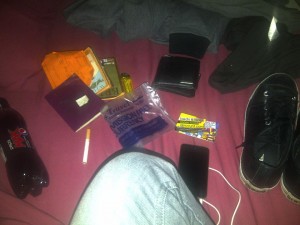 When showering the shower door covered half the area of the shower when open. It was uncomfortable but all part of the experience. Once at breakfast, mingling with the other people there it was pretty obvious a lot were solo backpackers; That perception of a traveller was easily fitted, the way they looked with their unique way of dressing, their sociable but tired persona, their different accents and ages. It was good to have a connection with them, to feel like one of them, and have a sense of meaning and freedom.  I remember thinking to myself, we are all alone, but we are one together, right now, in this place. Us against the world in some respects.

Our new hostel for the night was called The Passage Hotel & Hostel.  I met a French girl called Marion. She was a  dancer of some sort. Maybe a form of ballet if my memory serves me right. A very elegant girl, well spoken but looked exhausted. She was travelling to Paris to audition for a show, typically a poor dancer trying to make the big time. At that time, I thought she was the most interesting person I’d ever met in my life.

The Groeninge Museum had many 15th century paintings which were very odd and interesting. Paintings which were extremely detailed, which had meaning and myth to them. The one I remembered the most was The Last Judgement which was my favourite, showing the end of the world symbolised by crazy sized animals, objects and fatal predicaments.  We strolled around the town over the canal bridges which were delightful; there were taxi canoe boats for passengers to circuit around Bruges, looking at the monuments, inhaling in the fresh smell of the canal water. It remembering it feeling like it w   as before 8am. That peacefulness where there is no TV or music, car engines or market traders, that peace which just automatically soothes the mind opens up the body and mind for the day.

The iconic Belfry Tower was a lot more challenging than I thought to climb.  All 366 steps I climbed, and towards the top I was on my hands and feet to make sure I didn’t dwindle. It was a nice journey up, very medieval old fashioned steps, the walls, the space was very limited. When I got to the top it was quite euphoric. I looked over Bruges and it was beautiful. The quirky buildings, the sun setting, the Ice rink from a bird’s eye view, the breeze of the wind cooling down my now sweat in juiced eyebrows. It was peaceful, until the bell went off. Wow that was loud, deafening! However it was a new experience, I was just happy to be there and up at the top.

Towards evening time and our last night, back again in the Grote Market area. We ate at Café Des Arts.  The mussels and frites were great and a Tower beer all 25 euros!  The atmosphere was cosy but vibrant, the bars were old fashioned but modern and the people were odd but friendly. It was a nice end to a new sort of vacation. 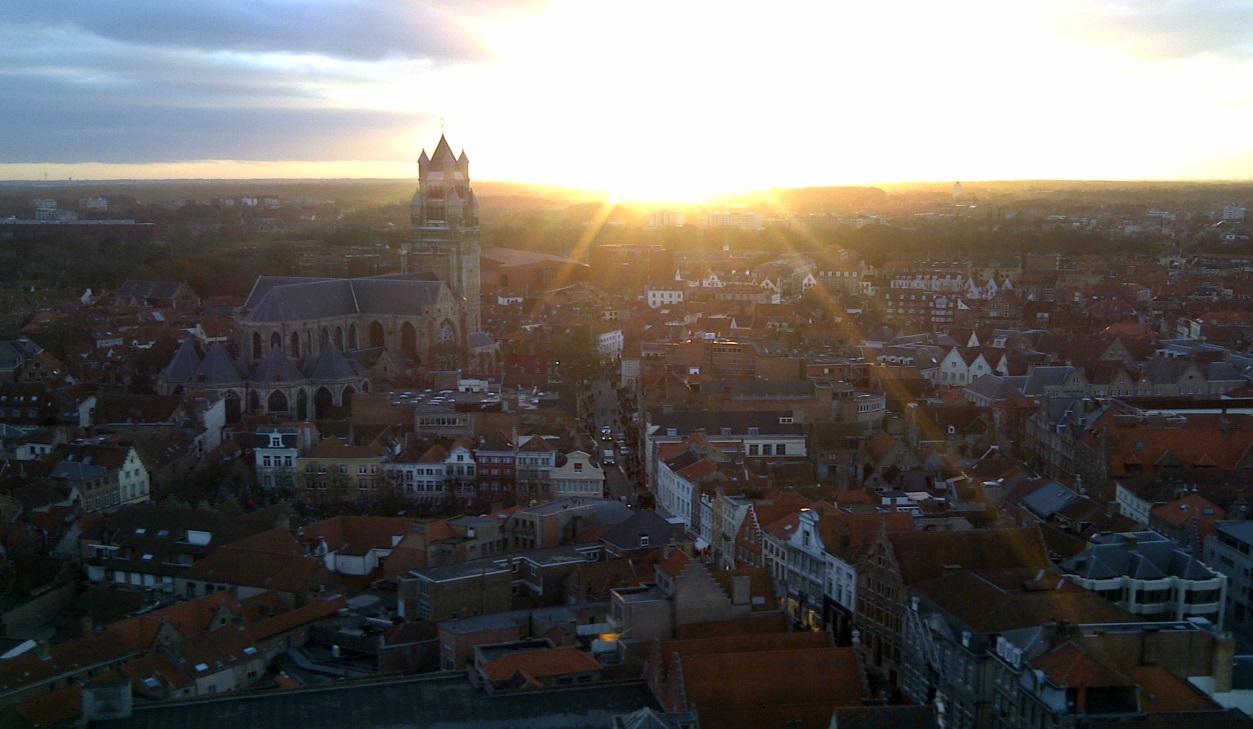 Why do I love Bruges? It was wonderfully eye opening, almost like I was time travelling through an un-touched past time. Tourism wasn’t huge, so it wasn’t spoilt. Things were cute, canny and cosy. At the time, , it was quite an odd place to me, but Bruges offered history, unusual views, a different culture, a peacefulness, a freshness about Europe. It provided me with the kick start to want to sacrifice my comforts to see different things in the world. It opened my mind to a whole new world. It opened my mind to travelling. I love Bruges.

The perfect travel phone: How to choose one you'll love!
India: Zurviving Zanskar Part 2
France: Evoking Travel Memories with Food
My Mother was the Center of our Jewish Universe