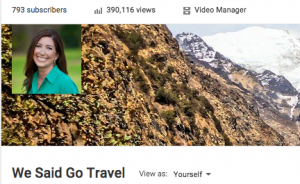 Thank you to everyone who has subscribed to my We Said Go Travel YouTube Channel! I appreciate all the likes, comments, views and help with my videos! I now have 390,116 views and 793 subscribers. Soon it will be HALF A MILLION!

In 2015, I was invited on amazing adventures in Los Angeles and all over our planet! Here are a few of the videos I created about my journeys.

Feb 2015: United Airlines took me to the Oscars and I skied in Park City, Utah.

March 2015: Guinness Storehouse brought me to Dublin and I was in the St. Patrick’s Day Parade! I wrote about it for USA Today.

April 2015: I explored Santa Barbara, stayed at the Goodland and ate at the Outpost.

May 2015: I camped with the Cows and won a social media award!

June 2015: Palm Desert at the JW Marriott! Our adventures are recorded in ten videos with strolling on the San Andres fault, amazing meals and great entertainment!

July 2015: The first ever restaurant week in St. Kitts and my first visit to the island–six videos include Christophe Harbor, Belle Mont Farm and the island railroad! I shared more of the story in this USA Today article.

August 2015: I returned to the beautiful Colombia for my first visit to Bogota. Ten videos tell about coffee tasting, the gold museum, fine dining and the underground church in the Salt Mine. The graffiti tour was highlighted in my Street Art article for USA Today.

Thank you to Jason Will & Scott Eddy for taking me on part of their Zipkick roadtrip from Park City, Utah, through Yellowstone, Mount Rushmore, Custer National Park & Minnesota. I loved my first hot air balloon ride and the incredible state fair!

September 2015: NYC called my name in September to be on national television as a travel expert and talk about the Hilton Garden Inn.

I was curious about the Curio Collection and visited Dallas, Florida and Hamburg to explore 3 incredible properties. I went to Genoa, Italy to see friends from my cruise ship days and then was off for another adventure.

October 2015: In Israel, I walked on the beach at sunrise and sunset and walked through history in Caesarea and Jerusalem. I made 27 videos to share what we saw!

December 2015: Viking Cruises invited me to sail on the Romantic Danube to explore the Christmas Markets during Chanukah.