WIPEOUT: falling down in the Thai Islands

Wipeout! Yard Sale! Knocked Down but I get up AGAIN 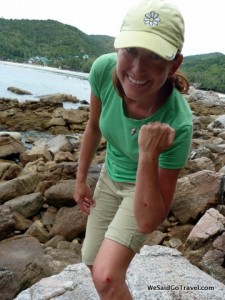 They say third time is the charm but not sure if that is true if you wind up bloody. In Koh Phangan we went for a walk from Haad Yao to Haad Salad to  Mae Haad and back again. All three bays are pretty but I am certain more lovely on a sunny day when the blue colors of the water can really be seen. It has been rainy and misty and not particularly nice. At least it’s not pouring down buckets as it has during some of our time so far in Thailand.

We were wandering and walking on a road full of coral and then I found myself no longer upright. It is always so surprising as an adult to suddenly be sprawled on the ground.  George turned around, shocked by the sound of my forward motion as I slided across the sharp coral edges. He crouched next to me and said, “Are you okay?” I said, “Slowly.”

I could see a large stick in my shoe. My foot did not hurt particularly but felt cramped so I figured the rock had not gone through my skin, but only was inside my Chaco footwear. I loosened the straps and slowly released the culprit. I think that a protruding tree branch was the lever that caused me to kiss the path.

Meanwhile, I was still face down, so I carefully began to move my limbs and rise toward a seated position. My left lower arm was bleeding in two places and so was my knee,  but neither wound seemed major.  My palms were scraped but not too seriously. Somehow I managed to keep my face from participating in the fun. 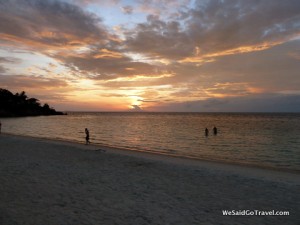 George walked around gathering our things. My sunglasses were only a few paces away but the camera had been flung a good distance. George noticed that the camera battery was missing. In the hunt to recover it, he had to walk quite far. If it was a snow-skiing accident, the losses would have resembled a yard sale.

I stood up, brushed myself off and kept walking. We talked about my two other falls I’d accomplished in our nearly six years of traveling. (I fell one night in Samoa and hit the ground so hard I chipped a tooth and once in Laos, at a French restaurant, I slipped in a wet bathroom and fell down three stairs.

This time I have to say so far I feel okay. I washed and pronounced myself ready for the next activity.

Discovering 50 Things Before I am 50: Sports
Music on the Road: The Five String Addict
Wharton Magazine: Shark Tank Star’s Secrets to Business Success
Flying Away: Will you Love me Anyway?