How Empire Avenue Taught Me to Brandish My Gaming Badges 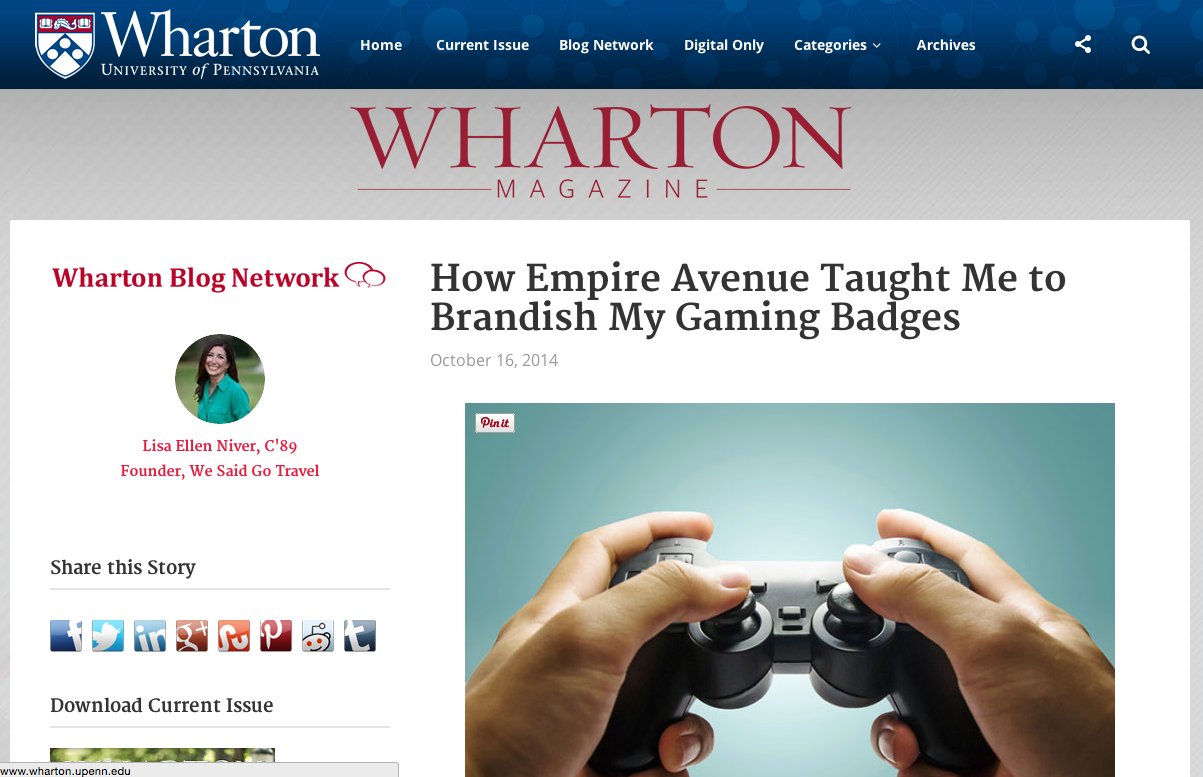 For most of my life, I have not considered myself into games. I was never good at Pong, and was there ever anything simpler than moving that one paddle up and down the screen? I tuned out when people talked about single person shooters, HALO and their favorite thing to do on Xbox. But when a friend suggested Empire Avenue, a stock market simulation social network game, I was intrigued. I loved everything about it especially watching my ratings and getting badges. Then I read the book Reality is Broken by Jane McGonigal, and I began to realize how much I have participated in games before this.

I have used many educational websites in the classroom as a teacher, and I was thrilled when I heard a fifth-grade student say, “Class was so great today. All we did was play.” This was in reference to playing CellCraft, where students have to save a cell from a virus. I loved when students were shouting at one another, “Where are the AA (Amino Acids)? I need to fix my cell wall.” They learned so much as they were enjoying it and moving up levels. Their main concern was beating the game and watching the score, not noticing all the content they learned.

Game-playing inspires “fiero,” the feeling of vanquishing the “dragons” of the 21st century in a virtual world—a reaction that McGonigal describes as “one of the most powerful neurochemical highs we can experience.” Digital badges are appearing in many forums as a way to inspire engagement. At the YMCA in New York City, teenagers who used to do no physical activity are suddenly showing up three times a week and earning a basketball Credly badge. They know that if they make baskets, they will receive another badge. They can see the steps toward a goal. Before, they would not get off the bench to stop texting, but now they are actively engaged in improving their health and in getting to the top of the leaderboard with the most points. Not only are these teenagers losing weight, some of their winnings are exchangeable for physical goods. Teens are happily sharing their badges and weight loss on Facebook and social platforms, and they are growing their support community in the process.

In Dallas, the Museum of Art decided that its goal was for people to engage with the art exhibits. No longer are visitors observing; they are active participants attending lectures, receiving codes and gaining points with Credly digital badges.

There are many ways we can create levels in life that have more privileges or rewards after engagement. In The Social Employee: How Great Companies Make Social Media Work, authors Cheryl and Mark Burgess explain how “gamification can mean a variety of different things, from earning badges through social training programs to interactive approaches for raising brand awareness to getting employees involved in things like product launches.”

With our work lives, gaining badges will tell future employers all about us as a digital portfolio. High school students can display badges about volunteering and scholastic experiences for university admissions departments to see.

Companies want engaged followers and brand ambassadors, schools want students who run into rather than out of the classroom, and museums want patrons who love art and rave about it. Democracy needs life-long learners who are passionate about their beliefs.

Are you ready to play a game?