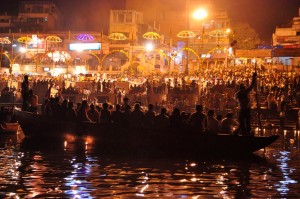 It’s not a three-letter word. More like a three-letter feeling that is known to inject rapid bursts of Faith, Hope and Love, into disillusioned grown-ups and children. Now the story I am about to narrate does not involve ravines, Burning Men or shooting stars.

This particular story is simpler, shorter but unforgettable nevertheless.

Three years ago I was dispatched on a work assignment to conduct a reccé of India’s holiest city, Varanasi (Benares). One of the world’s oldest cities, Mark Twain once famously remarked in 1897, “Benares is older than history, older than tradition, older even than legend, and looks twice as old as all of them put together.”

Over the centuries, faithful Hindus traversed through the country’s scorching plains, carrying with them the corpses of their loved ones, to have them cremated along the banks of the River Ganges. The belief being that a cremation in Varanasi instantly frees the soul from the never-ending process of rebirth, thereby paving the way to an easy Nirvana.

As the sun goes down in Varanasi, an aarti (ceremony) is performed along the river banks. Every conceivable space is occupied: the steps, terraces of tired-looking buildings around, the stage and the boats which serve as a vantage viewing point. A constant clanging of sorcerous chants, bells and drums is accompanied by dancing sadhus draped in orange, floating behind screens of smoke and incense. So much for the exotic nature of the city that beckons to photographers from over the world.

Each day, an endless stream of cremations are held along the ghats which are a series of steps along the river. Photography is forbidden however opportunistic touts charge Westerners a few dollars to get up, close and personal with the scalded corpses, and grotesque limbs that crackle and pop as the heat blazes through. Meanwhile, tonsured male relatives look on with a resolute silence while the womenfolk are almost conspicuous by their absence. Later, the ashes are dispersed into the water along with the remains of bones, leaving India’s Untouchable class (the Doms) to dive into the river bed in search of a stray gold tooth perhaps found in the deceased member’s ashes. Cremations happen throughout the night. But not everyone is cremated…

Sitting on the balcony of my hotel room at midnight, I watch a pale yellow moon rise ominously over the Ganges. The night is almost still after the frenetic pounding and crackling of the day gone by. And then I hear a splishy-splashy sound out of nowhere. It’s a boat plowing its way into the night, carrying with it a family who discreetly lower a wrapped corpse into the river. I watch as the corpse sinks into the inky black waters leaving no trace save for a ripple. The party returns to the shore. I see neither their faces, nor their expressions but the heaviness in their hearts becomes mine. A heaviness ironically brought on by letting go of their load. The next day, I am told that pregnant women, children, lepers, those who have committed suicide and holy men can not be cremated; they have to be offered directly to Mother Ganges.

At the break of dawn, the pilgrims are already to be found submerged waist-deep in the river, a river floating with errant human corpses, fruits, vegetables, flowers and animal carcasses. Reverent women, children and men pray in earnest to the rising sun while temple bells peal, completely oblivious to the surrealistic sights around them. Further ahead, a woman scrubs her laundry furiously, while a little boy scoops some water to rinse his mouth after he empties toothpaste froth in to the river.

You have the right to ask me, “Is this your idea of awe?”

Yes, it is. Because it defies 21st century logic, pre-historic logic and all kinds. I know that faith and logic were never meant to go hand-in-hand. But this beats everything. I am Indian myself, a city-bred Indian who steered clear of the Holy

Dip. And I watched how other urban worshippers gingerly performed their rituals on the ghats, wanting very little to do with the sacred water, whilst the others stood unshakable in their faith, taking in the sun’s warm rays, while infant corpses brushed gently past them.

And this, my friends is what Faith is all about. To truly believe that a river you consider a Mother is intrinsically pure, and will protect you no matter what the conscious eye perceives. I couldn’t do it. But millions have been doing it through the centuries.

And they lived to tell to the stories of a Water-Borne Love.

About the Author: Nicola Desouza is a travel writer based in Mumbai and occasionally Pondicherry, who loves the human aspect of travel. Read more by Nicola on her blog.

Indonesia: A Quiet Gratefulness of Mt Agung
Guatemala: Waters With a Taste of Mountain
I am grateful, for the beautiful people of Malawi.
India: There's Something About Lord Buddha That ...