Want to Win A Valentine Gift from KTLA?

Click here to watch the VIDEO: You must enter by February 8, 2018 and follow the contest rules on KTLA

What can you win for the KTLA Visit Ogden Getaway Giveaway?

Ogden’s motto “You cannot go anywhere without coming to Ogden” is related to a time 150 years ago when the railroad across America first connected our country.

There was a railroad from Omaha to the East coast but in order to increase the economy there needed to a faster way to bring produce from California to the other side of the country.

It used to take three to six months to travel by covered wagon what would take 8 days on the train. Getting your cattle to market or oranges on the dinner table was possible with an 8 day journey but not with a 3 month journey. The train changed everything. In Ogden, you could dine on oysters from the California coast and steak from Omaha. New York City could have fresh oranges! Not only was commerce changed by the connecting of the continent by rail but also communication. Telegraph poles were run along side the tracks and mail was carried in the cars.

Every single president stopped in Ogden to change train lines on his way from one coast to another. Every Ambassador on their way to Washington Dc and movie star going to New York City made their way through Ogden.

The Union Pacific Railroad was built by mainly Irish workers starting in Omaha and moving west. The Central Pacific Railroad needed the knowledge of over 10,000 Chinese workers who could dynamite their way through the mountain passes. Union Pacific Train 119 moving west burnt coal and brought beer and The Jupiter Central Pacific #60 burnt wood and brought champagne when the rails met May 10, 1869 at Promontory Summit for the Golden Spike ceremony. 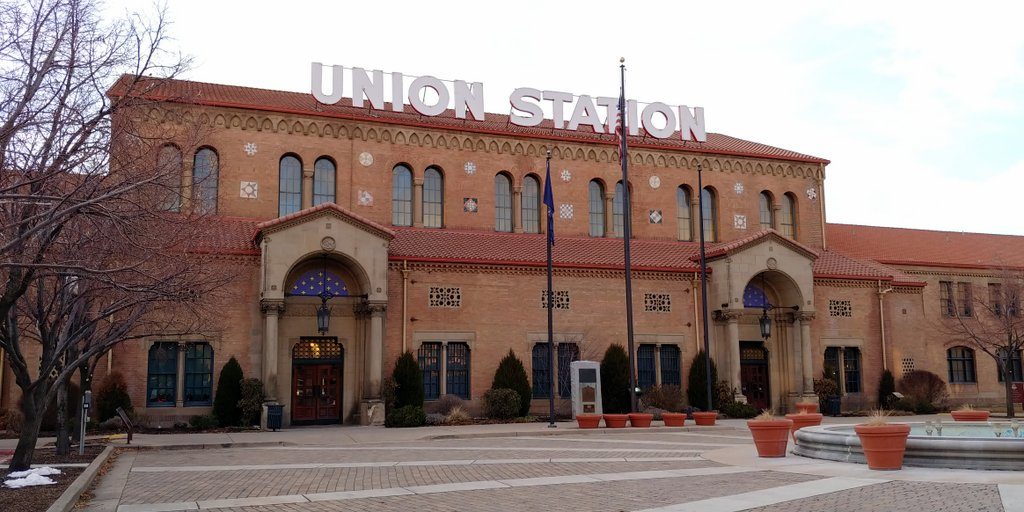 Before the trains, there were over 300 time zones in the United States. With 100 trains coming through Ogden every day, it was necessary to know which train was arriving at what time. Four standard time zones for the continental United States were introduced at noon on November 18, 1883, when the telegraph lines transmitted time signals to all major cities. In 1918, one hundred years ago, Congress passed the standard time act which made the time zones official.

Engineers were watching the track and needed to know when trains would arrive as there was a single track and trains moved in both directions. Time became life and death and pocket watches became all the rage.

How do you get to Ogden?

Fly into Salt Lake City from Los Angeles or Burbank. It is less than a  two hour flight and there is a one hour time difference. It is about 35minute drive to downtown Ogden.

There is a Ski3 pass which gives you a day at each of the 3 resorts and is 30% savings. The Ogden Valley is one of the most accessible, family and budget friendly ski areas in the country.

Nordic Valley Resort opened 50 years ago in 1968. It is the perfect place to take lessons and get comfortable on the slopes. Nordic Valley was one of the downhill training ski areas for the 2002 Winter Olympics. There are 140 acres of terrain for skiers and boarders with 3 chair lifts: Apollo, Bridger and Crockett. There are after school programs for elementary school students and 80% of the lessons here are for “Never-Evers!” Stop by on Sunday for prime rib at the lodge. Thank you to Dave Mariani for the lessons in both skiing and Nordic Valley History! If you are ready to really learn to ski, he is waiting for you.

Snowbasin Resort has 3000 skiable acres and 3000 feet of elevation. There are 106 trails and stunning gold chandeliers imported from Italy. The three lodges were upgraded for the 2002 Winter Olympics and are ready for your enjoyment. There are five terrain parks with 65 rails. It is one of the oldest continuously operating ski areas in the nation and started in 1940. I skied all day in falling snow and it was magical. I loved my instructor, Phil Miller, and his life lessons. My favorite run of the day was Herbert’s and I was proud to challenge myself and crush it!

There are monthly themed dinners all year long with elevated dining. In the summer, come for hiking, biking and Sunday brunch with a free concert. And don’t forget to bring your dog! When you take the gondola, you can see the flags of Olympic gold medalists and their names. Remember there is a vast variety of terrain here so everyone in your group can find the right spot to enjoy.

Powder Mountain’s 8000+ acres is located in the town of Eden and if you are looking for powder this is your eden to discover. Only 1500 tickets are sold per day which means this location has the highest ratio of skiable acres per skier of any resort. It opened in 1971 and in 1984, was the first Utah resort to allow snowboarding. If you are looking for powder, this is the place to explore! There are two new lifts adding 1000 acres of terrain. I loved Hippie Hill which is now accessible by both Village and Mary’s Lift.

There was great groomed corduroy and our first three runs all had Western names: Shot gun, Winchester and Kwick draw. My instructor, Loel, had been teaching for more than 4000 days and had many great secrets to share about powder skiing. I loved this one the most: “Look where you want to go, not where you do not want to go!” I also learned that you can “Turn shop.”  As you go through the trees, you can find your way and slowly pick the right place to turn. There really is magic at Powder Mountain. As Loel says, “Skis are your chariot to take you wonderful places.” There is no snow making at Powder Mountain. It is all natural snowflakes and it is fantastic. I cannot wait to go back and ride the snow cat and explore more of the terrain.

From the top of Snowbasin Resort and Powder Mountain you can see four states: Utah, Idaho, Wyoming and Nevada.

Do you love craft spirits? Take a tasting tour through New World Distillery with the owners, Ashley and Chris. They have Oomaw GIN, Rabbit and Grass AGAVE SPIRITS, Blanco, Wasatch Blossom Utah Tart CHERRY LIQUEUR, New World Distillery’s Uncharted Series BARREL-RESTED GIN. They sell their liquor as well as mixers so stop by and create your own party!

In Ogden, there is something to do all year long. Come for the Summer Rodeo on July 24 and enjoy Pioneer Days. There is a balloon festival in Eden in August and there is great food and drink all year long.

Try out the hidden gem, Daily Rise Expresso which has two drive throughs in Ogden and in Layton which you pass on the way to Antelope Island which is in The Great Salt Lake and is filled with antelope and buffalo!

Are you looking for something really different?

Try out Social Axe Throwing. Imagine darts on steroids and you begin to imagine your time axe throwing. You play indoor and on a team and it is AWESOME! Who doesn’t want to throw axes?!?

What will you name your team? Smart Axes? Kiss My Axe? or Are you checking out my Axe?

Zucca Ristorante like many restaurants in Ogden is locally owned and you will likely meet the owners during your visit in many of the shops, restaurants and activities in the area. Enjoy authentic Italian Regional Cuisine with a modern approach and seasonal organic menu on Ogden Utah’s Historic 25th Street with art-deco inspired decor, and a beautiful atrium exclusive to Zucca.

I also loved Farr better Ice Cream which has been in operation since the 1920s!

Hampton Inn and Suites by Hilton is your historic choice in Ogden!

Originally named Fort Buenaventura, Ogden, Utah was founded in 1845 making it the oldest settlement in America. With its longstanding history, a lot of events have taken place in this small, but distinguished city. Although the settlement was founded in the mid-1840s, it wouldn’t be until 1869 when the city would really begin to flourish. With the completion of the transcontinental railroad, the city grew into a profitable community. Ogden became a major railroad town with nine rail systems. The system operated as both a north-south and east-web hub. Soon after, the system also adapted intermountain west crossroads, which was inevitably called Junction City. The railroad system sat in the center of Ogden’s continual growth. Some of the first industries that flourished were livestock yards, canneries, flour mills, breweries, iron works, banks, woolen mills, hotels, telephone, telegraph and power companies.

Thank you Visit Ogden for inviting me for a wonderful adventure! A giant hug and thanks to my fellow intrepid travelers: Mimi, Sydnie, Dylan and Kerri!

Travel with a Book! Teachers' Top 100 Books
Johnny Jet: Gratitude Travel Writing Contest
What The Hell To Do In Death Valley?
Learn to Play Fair with Eve Rodsky's Fair Play

2 responses to “Want to Win A Valentine Gift from KTLA?”