Uzbekistan: The Road to Samarkand 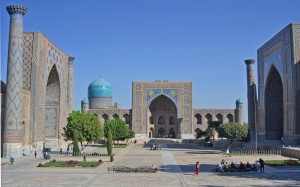 It’s dark and I am staring at the most incredible sight, lit up before me like a theatrical set awaiting a cast of thespians and minstrels to perform. Am I dreaming or am I really here? A car goes past behind me, its horn blaring that brings me out of my reverie and back into the real world, and, yes, I really am here.

“Why Uzbekistan? Where is it” my family and friends had asked. “In the middle of nowhere”, I told them and then showed them on the map the area of Central Asia, sandwiched in between China, Russia and India.

I came to Uzbekistan to satisfy a curiosity. Earlier in the year I had been to China and became fascinated by the history of the Great Silk Road and the countries of Central Asia through which it coursed on its way to the Mediterranean Sea and beyond to Italy and the rest of Europe. All caravan routes along the way seemed to lead to this place called Samarkand.

I had no idea what to expect, apart from what I had read on the internet and in the one guide book that I had managed to find. Even this did not have many pictures, so I was left to conjure up my own imagination and develop my own ideas of what I was going to encounter in this small and deserted country.

Well, what an extraordinary country…….a journey I will never forget. The scenery, the preserved and restored architecture, and the people I met were all quite remarkable.

From the wonders of the ancient city of Khiva situated in the desert of Western Uzbekistan to the 10 hour ordeal to cross the Kyzyl-Kum Desert to the city Bukhara, my travels eventually bring me to the “Jewel in the Desert” – Samarkand itself.

Samarkand will forever be associated with the Great Emperor Temur (better known as Tamerlane) who built and developed the city as the capital of his vast Empire. Born in 1336, Temur, a descendant of Genghis Khan, went on numerous successful military campaigns to secure an Empire that stretched from the Mediterranean Sea to the borders of China, but he always returned to his beloved Samarkand. During his lifetime up until his death in 1405, he was instrumental in building an array of quite stupendous feats of architectural engineering, of which the focal point of the city was, and still is, Registan Square.

I have seen pictures and, like the Taj Mahal in India, I have been told that pictures do not do it justice. You have to see it to believe it.

My first impression of Samarkand is that of a quite modern city. Certainly the outskirts of the city have numerous industrial and residential areas but I could see the turquoise domes and minarets in the distance so I must be heading in the right direction.

Before heading for the hotel, the guide was keen to whet appetites by paying homage at Temur’s mausoleum – Gur Emir. I stood transfixed in front of an enormous, wonderfully decorated portal through which I could see the dome of the mausoleum itself. The predominant colour of the millions of tiles is turquoise. The guide says that this is a rather understated monument for such a great warlord. If this is understated, what must the other sights be like?

Well, I was to find out the following day when I would be taken to see Registan Square.

We made our way from the hotel through the streets of Samarkand. We passed Gur Emir, which we had visited yesterday. I still think it looks pretty impressive but then we arrived at the viewing platform overlooking Registan Square and I experienced another ‘Taj Mahal moment’ when my jaw hit the floor.

I just stood and stared at what is in front of me. Quite amazing!

It was difficult to appreciate the sheer size of the madrassah portals from a distance, but, up close, they are huge. I felt like an ant as I walked through into a magnificent quadrangle on the inside where students of Islam would have studied all those years ago. Now, the tiny rooms are converted into souvenir outlets and museums.

Now I’m here again because the guide had told me that the whole Square is lit up at night. Having resolved to miss dinner and take a wander down here to experience this, I have no regrets.

She’s right! What a surreal moment this is, seeing the huge façades lit up from the ground and the turquoise dome of the mosque floodlit against the night sky.

Uzbekistan – a quite extraordinary experience.

About the Author: Peter Clarke is a travel writer and photographer who has been fortunate to have been able to visit some wonderful destinations around the world. He has published a number of pocket-sized guides illustrated with his own photographs.

A Mekong Adventure: Exploring Paradise in Laos
Guatemala: Tantalizing Tajumulco
Southern Africa: Grateful to be Sharing our Planet with Rhinos and Sharks
Koh Rong, Cambodia: One Among the Stars

4 responses to “Uzbekistan: The Road to Samarkand”