MY TRIP TO ORLANDO 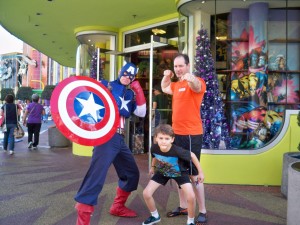 Orlando inspires me to use my time wisely because there’s so much fun stuff to do. We went to a theme park every day. We’d get up early and we regularly went to a breakfast buffet so that we could eat a lot so that we would be full for several hours.

These are all the parks that I went to: Hollywood Studios, The Magic Kingdom, Animal Kingdom, Epcot, Universal Studios, and Islands of Adventure.

One of my favorite rides was Big Thunder Mountain Railroad at The Magic Kingdom. It was like an old-fashioned train ride, but went really fast. They also had a ride called Splash Mountain, which is basically a roller coaster but on water. My whole family went on it, and boy you should have heard my grandma scream!

At a theme park called Epcot they had a international food festival. At the food festival they had all these different foods from different countries. The food there was delicious. My mom enjoyed the samples of different wines.

At another park called Hollywood Studios, they had a ride there called Star tours. It was a simulated ride, and my dad and I went on it something like seven or eight times. Each time it was different, and then when we exited there was a station where you could build your own light saber. It was cool!

We celebrated my birthday in Orlando and I got a brand new Lego set. And where did I get my brand new Lego set? I got it at Downtown Disney, another part of Disney World that was for shopping, but it looked like a theme park with all of its huge colorful buildings. They also had a Lego store down there to. They had a whole bunch of Lego displays at the Lego Store of different Lego characters. They were huge—bigger than real-life people. There was a huge Lego Hulk on display that kids had cooperated to make. I even made a piece of it, but because we wanted to go to a whole bunch of other theme parks, we didn’t have time to come back and see it finished.

At a theme park at Universal Studios called Islands of Adventure they had an awesome 3D Spiderman ride. They also had people dressed up as superheros that were in a parade through the streets. Me and my dad even got our picture taken with a few of them.

Even though we did so many fun things, there were a lot of things I wanted to do that we didn’t have time for. There were more theme parks like Legoland, Sea World, and different water parks at Disney World. I also wanted to go to a swamp so I could see some alligators, but I’ll have to save all of these things for next time.

Even at the hotel there where things to do, like me and my uncle went lizard hunting and found some lizards and geckos. One thing that I wanted to do was go into the pool at the hotel but it was too cold during that November.

There were souvenir stores there too and we brought back Lego key chains for my friends, and my mom and dad bought glasses, pens, and shirts for their friends. I got some superhero T-shirts that you couldn’t find anywhere else.

As you can see, there were a lot of things to do in Orlando. We would usually spend all day at a theme park. Sometimes we would stay up to fourteen hours, getting back to our hotel around midnight, and I still didn’t get to see everything! I hope to travel to Orlando again one day, and now that I know what to expect, I’m sure I will be able to see even more in a short time.

About the Author: Teddy Kewin is ten years old and lives in British Columbia, Canada. He is homeschooled and enjoys reading, judo, building Lego, and hanging out with his friends. For the last three years he has completed the NaNoWriMo challenge of writing a novel in thirty days. This year he wrote over eleven thousand words in one month.

How to Make Friends While Traveling Solo
Travel writing 2.0: Lisa is a contributor!
Who Wants to Sleep in the "Mansion in the Sky?"
Starting 2021: Niver's News

5 responses to “MY TRIP TO ORLANDO”