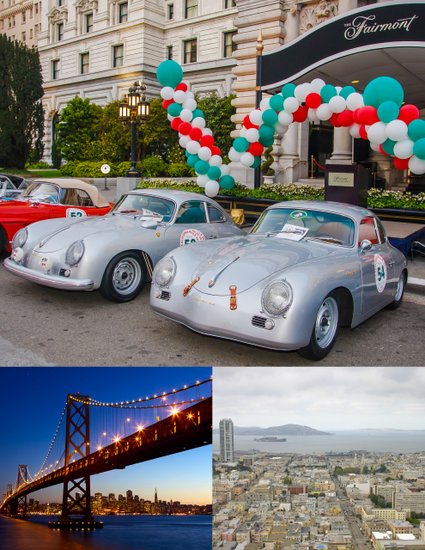 For your trip to “the Golden Gate city”, embark on a world-class travel destination by staying or visiting The Fairmont San Francisco. People often say it is a “hotel so grand they built a city around it”, and that they did. Resembling a European palace it proudly resides at the corner of California and Mason street, situated in the epicenter of famous cable car lines, and minutes away from the Financial District, Union Square, China Town, Fisherman’s Wharf and Ghirardelli Square.
Since 1907, The Fairmont has stood as a piece of history that stands atop Nob Hill overlooking rich culture and breathtaking scenery.For the Fairmont’s beauty and “terra cotta façade” has withstood The Great Earthquake and watched international dignitaries, heads of state and celebrities grace its walls.
Today the hotel stands proudly as a legendary tourist destination and a global host to thousands of people each year. The rich history of both San Francisco and the Fairmont San Francisco go back as far as the California Gold Rush of 1849 when James Graham Fair, a miner who made his fortune from silver, staked his claim in the summit of Nob Hill.  Flash forward today, it’s captured Hollywood’s eye in Aaron Spelling’s Television series “Hotel” who commemorated the famous hotel lobby. The popular destination houses 591 guest rooms, 62 luxurious suites and 55,000 square feet of meeting and banquet space, thus it is no wonder this structure of vintage and modern luxury is known as the “west coast White House.”
Committed to protecting the environment the Fairmont hotel installed four honeybee hives atop their 1,000 square foot rooftop garden. Along with the already local and organic cuisine the sweet concoction can be found in the hotel’s afternoon tea service or on draft fittingly titled the Honey Saison served in the Laurel Court Restaurant and bar.
The Heart of Luxury
One can enjoy the lap of luxury in the hotels world famous Penthouse suite. Newly restored by Champalimaud Design from its original creation by American archeologist and art historian, Arthur Upham Pope, the suite itself is valued at $20 million dollars. The charming interior is reminiscent of the Roaring Twenties, and depicts a time period of America’s wealth and opulence. The suite spans 6,000 square feet across the entire eighth floor of the historic Man Building within the Fairmont. The Penthouse is home to icons such as President John F. Kennedy, Prince Charles of Wales, Tony Bennett & Mick Jagger, to name a few. With a price tag of $15,000 a night, the living quarters include three large bedrooms, a living room featuring a grand piano, a formal dining room, a professional-grade kitchen, a two-story circular library, a billiard room (covered in handcrafted Persian tile from floor to vaulted ceiling) and an open terrace with extensive views of San Francisco. Furthermore, amenities include dedicated personal “at your service”- should you desire a butler, housekeeper, a chef, massage therapist or personal trainer.  The gourmet kitchen comes stocked with Ferry Building Farmer’s Market’s selection of fine wines, and organic produce. From Bvlgari bath products to personalized robes and 1,000 percent cotton or silk linen, fresh flowers and more.  The Penthouse is the ideal destination for the ultimate extraordinaire and a must see on your visit to San Francisco.
About the Author: Amy Apodaca is a content specialist and style editor for HealthBeautyLife.com, a national publication that celebrates lives well-lived and admirable lifestyles through celebrity, health, beauty & fashion, food and travel.

Sea Turtle Rescue at the Casa Magna
Who Wants to Sleep in the "Mansion in the Sky?"
Total Lunar Eclipse Saturday Dec 10, 2011
Cruising the Canaries: 7 Stops Along the Way