This is an entry in the We Said Go Travel Writing Contest written by Michael Thal from America. Thanks for your entry Michael!

My daughters rested after our eight-hour trip.  I stood in awe at the grandeur before me.  Nature had taken the flat Utah desert as her canvas.  With sand, water, and an abundance of time as the palette, the result was a masterpiece, Zion National Park.

For 2 1/2 days our car rested in front of our cabin in Springdale, Utah.  A free bus shuttled us back and forth to the park.  I sat smiling enthusiastically as the bus rumbled past brown brick buildings blending between mountains of rock that rule this domain.  Koren, thirteen, wasn’t impressed.  She fussed with the cap on my balding head.  I like the visor facing forward.  She prefers that I look like a catcher. Channie, a college freshman, adjusted her camera in preparation of getting the best picture.

It was the middle of August.  The grass in town was dry and brown.  As we approached the park, a flourish of green appeared.  Walking through the park’s entrance, Channie pointed her camera at the bubbly Virgin River.  It flows between massive multicolored vertical cliffs.  A river, which could be jumped in two leaps, etched out a deep canyon and valley of life.

We took a shuttle to Zion Lodge.  A paved path led us to Emerald Pools. Soon the pavement was gone, a steep dirt incline took its place, and we climbed a canyon sandstone cliff.  Channie grabbed hold of my belt loops in anticipation that I would haul her up the mountain.  “Who you kidding?” I asked. 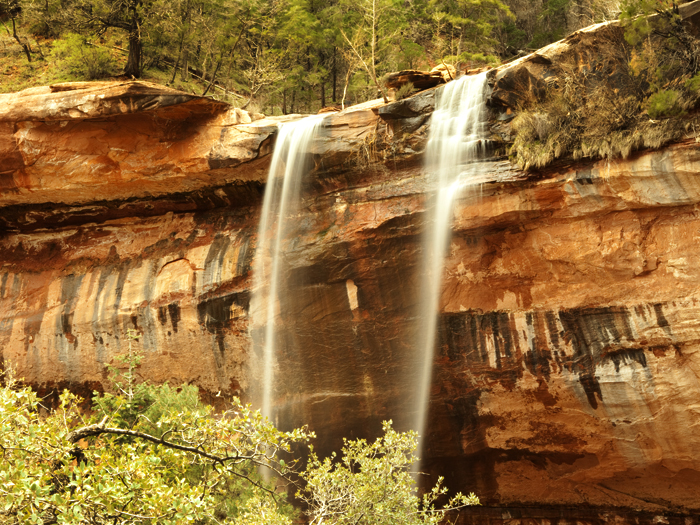 “Come on Daddy, I’m tired.”  So we took some pictures and drank bottled water.  I looked at the clear blue sky with a wisp of a cloud holding together above the canyon floor. A wall of dark clouds threatened on the horizon.

Koren ran ahead leading us to a series of basins carved into a rock ledge by flowing water.  “Hey, look at that waterfall,” she said.  She kicked the sand noticing its fine quality.  “Daddy, this stuff feels so soft and silky.  I could almost walk in it barefoot.”

For a brief time, we were the only hikers.  It was a silent refuge from the bustle of the city we left behind.  Only the sound of falling water broke the silence of the Emerald Pools.  The weather had changed suddenly.  With thunderclouds over head, we returned to our cabin.

That evening we had a rare display of weather.  It hailed.  Koren ran out in the midst of the storm.  She returned quickly, for the stones pelted her head as if an unseen assailant stoned her.  We ate the sandwiches I packed, and played Chinese Poker, Channie’s game that she won pitilessly.

The next morning I awoke to a sunny day.  I read and walked around the motel inhaling deeply.  The air, so peculiarly clean, smelled of nothing at all.  At 10 it was time for my girls to awake. Some people think I have a beautiful voice, but not Channie and Koren.  I sang “If Ever I Would Leave You” from the Broadway musical, “Camelot.”  When I reached the second refrain Channie jumped out of bed screaming, “Okay! I’m up!”  I laughed, she took a shower, and Koren sneered at me from her bed covers.

Weeping Rock Trail is an easy under a mile hike where springs drip from overhead.  It runs along a short steep paved path through a canyon of hanging gardens of wildflowers decorating the walls.  Koren and Channie marveled at the golden and western columbine, scarlet monkey flower, and maidenhair fern.  Then they took off around the bend.  I noticed that spring water seeping through the porous rock walls nourished this lush desert oasis.

My daughters patiently waited for me at the end of the trail leading to weeping rock.  “You guys have a lot of energy today,” I said.

“Yeah, yeah, just come over here and look at this,” Koren said.

She pointed to a huge sandstone rock dripping with water.  Channie felt the wall of stone that supported the crying mountain and noted, “It feels as soft as a baby’s butt.”

“When was the last time you felt a baby’s butt, Dork?” Koren admonished.

Redirecting, I asked, “What are your senses telling you?”

“I can hear the drip, drip, drip of the overhanging rock,” said Channie.

“And I can hear the babbling brook down below,” Koren added.

We breathed in the air, free of city pollutants.  I looked upward and saw a jet painting its white tail across the blue sky.

We returned to the bus stop, but were stranded for an hour due to a fire down the road.  The propane fuel from the previous bus leaked onto the scorching black top, ignited, and consumed the bus in flames.  Fortunately, no one was hurt and the fire department arrived in time to prevent a maelstrom. 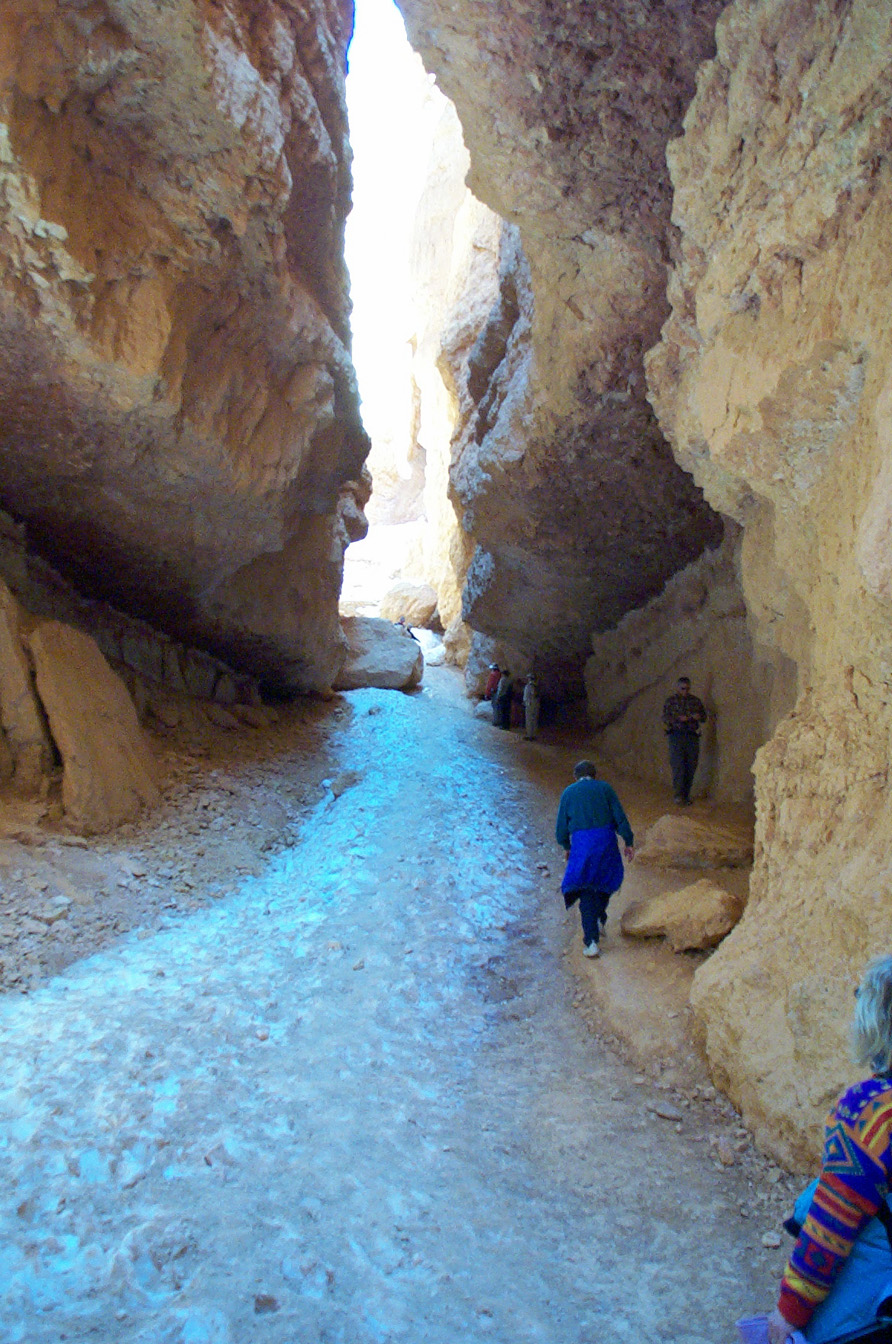 It was a hot day.  We returned to our lodge, dressed for the pool and raced each other until we were winded.  We ate a leisurely dinner, hunted for souvenirs, and returned to our room to another card thrashing by Channie. The next morning we packed our things and were off to Bryce National Park.

Mt. Carmel Tunnel highlighted the 90-minute trip to Bryce. “Hold your breath and make a wish!” said Koren.  We would have turned blue if we didn’t sneak a breath or two before the tunnel’s end.  This engineering marvel of the 1920’s was built through solid rock connecting lower Zion Canyon with the high plateaus of the east.  The narrow mile long tunnel was drilled and blasted through the cliffs.

At Bryce my photographer noticed the hoodoos.  “They look like sand castles we used to make along the beach,” Channie said.  Hoodoos are bright orange pillars of sandstone of fantastic shape, left by erosion.

After checking into our motel we drove to Bryce Amphitheater, the largest natural amphitheater in the park.  Channie said, “Here we have to look down into the canyon.  At Zion we looked up.  Hiking around here should be easier.

Or so she thought as we strolled down Queen’s Garden Trail at Sunrise Point and through “Wall Street”.  Unlike Zion, there is little vegetation here.  We noted faces and animals carved into rock.  After descending a winding path Channie looked wide-eyed at the canyon walls. “We have to climb back up that thing?  Where’s the elevator?”

Our hearts pumped, the sweat poured, but after 2 1/2 hours we completed our hike.  Koren enjoyed running around a bend and doing jumping jacks as she waited for us.  “Oh, to be young again,” my elder daughter mused.

We planned 1 1/2 days at Bryce and 2 1/2 days at Zion.  We had a lot more to see, but we had to return to L.A.  In the car, we occupied ourselves with word games for amusement. We even played a version of “Weakest Link” which I didn’t have a prayer of winning.  It was fun and we laughed for 500 miles.

Nature may have created two natural wonders, Zion and Bryce, but after spending four days with my daughters, I feel as if I’ve helped mold two marvelous human beings.

About the Author: Michael L. Thal, an accomplished freelancer, is the author of The Legend of Koolura and Goodbye Tchaikovsky. He has written and published over eighty articles for magazines and newspapers including Highlights for Children, The Los Angeles Times, and San Diego Family Magazine. You can learn more about him at www.michaelthal.com.

The Bitten LA Food Conversation made its West Coast debut
Driving Across a Socially Distanced America
Are you a GIANT? Brawny supports #GiantsTakeAction
Visit Amanpuri in Thailand and help Palisades Elementary Charter School