Sri Lanka: To Go or Not To Go?

Article first published as Sri Lanka: To Go or Not To Go?on Technorati.

After the 30 year civil war ended, we decided to go to Sri Lanka last summer. Our friends enjoyed a month of great travel in September 2009 and encouraged us to go.

Wondering about the impact of so many years of war, I was worried about this trip. When we arrived, I learned that there had been 450 years of Dutch, Portugese and British rule before the civil war. I decided to ask as many questions as I could.
During our six weeks in Sri Lanka, I was constantly amazed by the friendliness of the people. Everyone wanted to talk to us and tell us how happy they are that the war is over, that there is peace, and that they can now travel in their own country.
The young students we met at Anuradhapurna were from the East and no one had been able to travel to this incredible ancient site for decades. A large group of adults came by bus from Colombo to Nilaveli Beach and all the men wanted to shake our American hands, offer us drinks and ask, “Sri Lanka good?” 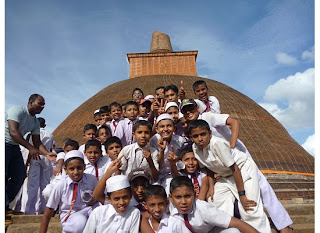 We told them, “Yes Sri Lanka is good. The people are so friendly.” Perhaps the friendliest I have ever met in the 100+ countries I have seen! During our trip, I read several books of both fiction and non-fiction about Sri Lanka. Reading about string hoppers (noodles made of rice) while eating them for breakfast added to the entertainment.

Reading about the government secret killings and clashes between Tamils and Singhalese in Michael Ondaatje’s Anil’s Ghost: A Novel

was spellbinding. What really happened I wondered? To read about the drama and struggle of women’s daily lives from the point of view of Latha and Biso, two main characters in Ru Freedman’s A Disobedient Girl: A Novel

, and then to see it was eye opening.

I turned to Jewish World Watch to discover more about the conflict in Sri Lanka. In their June World Crisis Update, Susan Brooks wrote: “Since 1983, Sri Lanka has suffered from continuous conflict between the government and a separatist rebel group, the Liberation Tigers of Tamil Eelam (often known as the Tamil Tigers).
The conflict is estimated to have killed up to 80,000 people with over one million displaced…Both sides may have committed war crimes…Sri Lankan refugees are still living in transit camps while the land is being de-mined…The government continues to hold 11,000 alleged LTTE in ‘rehabilitation centers with no legal representation, no access by human rights groups or relatives.”
Our journey did not include the North and Jafna, foreigners were told you needed permission by the government to venture to the Far North. Many locals told us that they can and will go to Jafna but we were not allowed. I am not sure what the conditions are but the JWW report makes me wonder and so does the book Not Quite Paradise: An American Sojourn in Sri Lanka 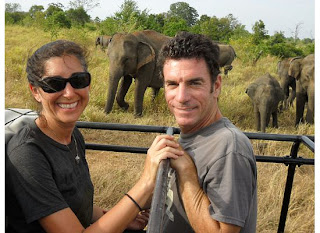 Both sources indicate that there are ongoing issues. Staying at the YMBA (Young Man’s Buddhist Association) in Kataragama and enjoying the pilgrimage festival, it appears that all is well. However, traveling the two or so “blocks” from our hostel to the beach in Nilaveli past barbed wire and Singhalese Buddhist soldiers makes me wonder. The security checks on the bus near Arugam Bay seemed more for alcohol than bombs but it is hard to know as an outsider.

I hope that tourism will continue to flourish along with peace, sealed roads and more freedom to travel. This small island nation is beautiful with treasures of ancient cities, national parks filled with elephants and leopards and wonderful welcoming people. I highly recommend making the effort to visit this wonderful country. Auyobawan and Stuti (Good bye and thank you).

One response to “Sri Lanka: To Go or Not To Go?”