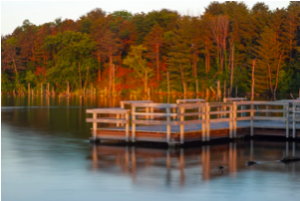 Of all the states in the Union that deserve to receive routine, positive attention and affection, Iowa sits at the top of the list. Yet, somehow, it also manages to fly frustratingly beneath most people’s Vacation Possibilities radar.

Iowa is a fascinating state, filled with big-hearted people, stunning skies, the future, fictional birthplace of Captain James Tiberius Kirk of the Starship USS Enterprise of “Star Trek” fame and the actual birthplace of John Wayne. There is so much within Iowa to capture a vacationer’s imagination, that it’s a shame the place is only thrust into the national spotlight when a presidential race is being run. Here are six reasons to visit Iowa now or in the future that have nothing to do with politics.

1. The Iowa River in Iowa Falls

A tributary of the mighty Mississippi, the Iowa River spans over 320 miles and happens to be one of the most picturesque waterways in the Western United States. For anyone looking to take a relaxing and photo-ready vacation, some of its most picturesque stretches sit along the banks of the quaint and tranquil city of Iowa Falls. Filled with lush city parks, quaint shops and restaurants, and comfortable hotels you can easily find on Expedia.com, a simpler life awaits in Iowa Falls, but it’s the river that provides the magic. Paddle the water. Fish for smallmouth and largemouth bass, walleye, and catfish. Wander up and down wooded paths in parks next to its banks. The Iowa River in Iowa Falls is the perfect antidote to a harried urban existence.

The history of the Amana Colonies is one of religious persecution, resettlement, hope, hard work, and change. A group of pietists left Germany in the 19th century looking for religious freedom and eventually settled seven villages in Iowa. All members worked in common and resources were shared, and the villages thrived. During the Great Depression, however, a shift occurred as the colonies embraced an individuality that kept their faith and communities intact but allowed members to focus more on individual goals and gain. The colonies were named a National Historic Landmark in 1965, and they attract hundreds and thousands of visitors every year. When you visit the Amana Colonies, you’ll experience a simpler, more clarified way of life centered on hospitality, hard work, farming, faith, and community.

If you love sculpture or you love parks, the John and Mary Pappajohn Sculpture Park has a lot of appeal. Located in a beautiful 4.4-acre green space, the $40 million donation of 28 oversized sculpture has transformed Des Moines’ already lovely downtown into a contemporary art mecca. Curated by the Des Moines Art Center, which is worth a visit in its own right, the sculpture park features work by 22 of the world’s most celebrated artists, including Louise Bourgeois, Barry Flanagan, and Mark di Suvero.

The eponymous bridges that inspired the much-loved novel and movie, six of Madison County’s original 19 covered bridges remain. Whether you head there in October to enjoy the covered bridge festival, or you wander down during a quieter part of the year, the covered bridges will call forth every ounce of nostalgia and sentimentality in your body — an experience you won’t soon forget.

5. Grotto of the Redemption

Added to the illustrious National Register of Historic Places in 2001, the Grotto of Redemption is located in West Bend and features nine different grottos that depict different scenes from the life of Jesus Christ. The largest handmade grotto in the world — the bulk of the labor was undertaken by just two men, and the artistic vision belonged to a priest named Father Dobberstein — it also boasts the largest number of precious and semi-precious gems and stones in a single location. It is considered by many to be the Eighth Wonder of the World, and regardless of whether or not you’re a Catholic, it is an awe-inspiring place and work of art.

The barn quilts of Grundy County are affixed to more than 60 corncribs and barns, most of which are visible from the road along the 64-mile trail that passes through Grundy City, Conrad, and Wellsburg. From traditional designs to designs of individual quilt makers’ visions, each year sees more quilts added to the route. For a drive that is quintessentially American and public art- and craft-centered, the Barn Quilt Loop is unmatched.

So take your next vacation to the wonderland of Iowa. Whether you follow the Iowa River or kneel at a grotto in prayer, the place has a mystique and wholesomeness to it that cannot be encountered anywhere else.

Author Bio:
Kady Harper
I am a marketing administrator and modern blogger who works on behalf of clients in several industries including major tech corporations and well known travel sites. I have been working in the industry for almost two years and have gained quite a bit of knowledge about how to contribute great content to high quality sites. When I am not writing or researching I love to bake and sight-see. I have also traveled to a number of places around the globe and I cant’ wait to see all 50 states one day.