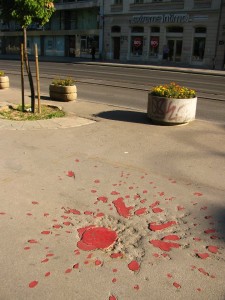 When my husband and I hoisted our backpacks and headed for our three-month European honeymoon, we had no plans beyond our one-way tickets to Thessaloniki, Greece. We were drawn to the freedom of having no plans, reservations, or appointments and enamored with the idea that everything we needed–tent, clothes, camera, notebook–fit neatly into our two travel packs.

It was a month of baklava and sea wind-blown dinners before we took the advice of some fellow travelers and headed for the unknown of eastern Europe, and I will be forever grateful that our lack of plans landed us in Bosnia and Herzegovina.

The name Bosnia conjured images of news footage skirmishes and tanks. It was a war I couldn’t possibly understand at seven–my age when the siege began. I remember it making me sad in that distant, removed way one feels about bad things happening very far away.

We entered the Bosnian countryside from Serbia, a country where the war was a blurb on a placard near the museum exit. Arriving at the Sarajevo bus station, however, we were immediately immersed in the residual reality of that conflict.

On the outskirts of town, apartment buildings were still pocked with bullet holes. Sides of buildings crumbled away from mortar blasts. Yet laundry lines still spanned those apartments, children’s socks and husbands’ undershirts hanging.

We took a taxi to the heart of Sarajevo, and our driver explained to us how his family had lived there–in that city passing our windows–through the siege. To our left was where the Bosnians had lived. To the right had been the militant occupants.

There was nothing of shock value in his stories of having to eat grass to survive. It wasn’t even catharsis. It was just a simple stating of fact.

We couldn’t go past those alleys because it left us exposed to snipers.

We arrived at our hostel and were warmly welcomed as Americans. According to the proprietor, Bill Clinton was a savior. His action ended the nearly four-year war, and with all his hospitality, he seemed to want to confer his gratitude, if not to Clinton himself, to any American that crossed his threshold.

Despite the mass hillside gravesite and innumerable statues and reminders, the closer we got to downtown, the less physical evidence remained of the war. Buildings had been repaired. The streets had been repaved. In the lively Turkish Quarter, winding through back streets of hand-pounded metallic tea sets and hookah bars, it was easy to lose yourself in the modernity and fun of the city. Surrounded by its green hills, I was taken aback by the beauty of the place. It seemed wrong, or at the very least incongruent, for a place with its history to be allowed to be so beautiful. Yet it was. Stunningly so.

But even in the most carefree bars, the city always remained of two worlds–healed yet mindful that true healing means never forgetting. In the aftermath of the conflict, when the streets were littered with spent bullet casings and mortar shells, Sarajevo did the only thing it could do.

The citizens took those shells and painted them in black and gilded filigree. They drew the city skyline in artful, careful strokes. From the physical remnant of death came art.

Walking on the sidewalks downtown, there are panels of concrete now known as Sarajevo Roses. When mortar shells collided with asphalt, a unique pattern of destruction emerged that looked almost floral. The resulting holes were filled with a red resin to commemorate where one or more lives were lost to the mortar fire. Death and beauty under our feet.

I am so grateful to have had the opportunity to see Bosnia, to hear the stories from the mouths of the people who lived it, to be embraced without resentment by people who risked their lives for water while I climbed trees and complained about my times seven multiplication tables.

I am grateful the people know how to embrace new life when it would be so easy to wallow in the staggering loss of it. I am grateful something like the Sarajevo Rose exists–a defiant rebellion against sorrow–and that my feet passed over it too.

About the Author: Liz Herrin is a freelance writer and editor who has had the privilege of traveling the world for the past five years with her husband. She holds an MA in creative writing and currently resides in the most beautiful place in the world–Seattle, Washington.

One response to “Sarajevo Roses”