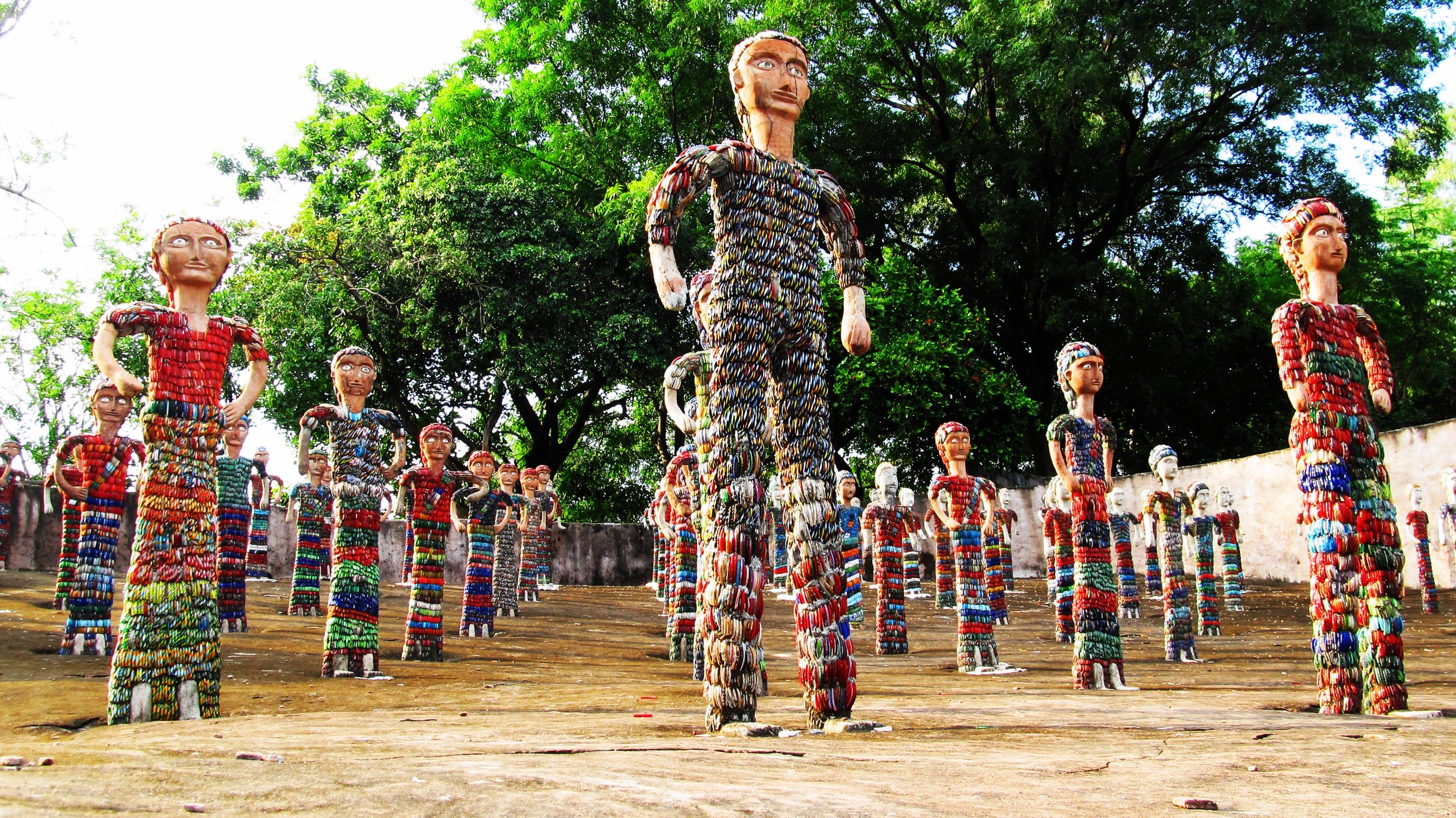 Being a frequent traveler and lover of serene nature, I have visited a number of exotic and beautiful places; enjoyed company of warm hearted people and watched speechlessly their hard work to survive, even today. But I never thought, even in my dreams that a park in a busy city will make me spellbound. The Park, made of debris is an example of will-power and the level of art created from those so called rubbishes shows intelligence of the creator. No word will be enough to show my reverence to the creator and creation.

Mid of August, me and my family, we had visited Chandigarh during our way back from Amritsar – the internationally famous place for golden temple. As we had three to four hours to spend there in Chandigarh, a visit to the Neck Chand’s garden, more famously known as Rock garden, was decided. The creator of this garden Mr. Neck Chand Saini was a road inspector of Chandigarh. Chandigarh, is the capital of two states Punjab and Haryana, and was officially re-planned and rebuild after independence of India.

We reached car parking at around 3pm. It was a typical hot and humid day. Staying outside was uncomfortable. But we had no better alternative, so moved towards the entry.

After collecting tickets, of nominal price, from the ‘wolf den’ like window we entered into the garden through a low roof entry gate made of stones. And wow, an incredible ambiance welcomed us. We suddenly got encompassed by deep green trees, stony walls and a tranquil environment. It was wonderful as well as thrilling. Sculptures made of stones were there on both sides of the trail. In childhood days, we often took part in competitions of making decorative handicrafts using thrown-away articles. But to make a 49000 square meter garden of models and dolls using just waste materials is really unbelievable. Mr. Nek Chand who made it possible did his creative works during off time only. He collected urban and industrial wastes and garbage from demolition sites of the under construction city and put them together to make models and dolls. From dumped glaze tiles to broken ceramic holders nothing was neglected and even damaged glass bangles were also collected and recycled for creativity. Really, nothing is useless if we have the intelligence and will power to use it.

After a few meters of walk from the entrance, we reached a mud hut which was the studio of the creator. The journey was not easy for him. He spent several years in making these surprising collections secretly in that hidden hut. Secret because the canyon in this forest was declared as reserved land, no construction was allowed there. Mr. Saini successfully kept his project hidden for long 18 years. In 1975 it was found out by the Government and was decided to be demolished. But huge public support stopped destruction of this brilliant construction and the place became open for all in 1976.
Listening to the story, while walking through a wonder land took me back to the history. The complete trail has been planned very proficiently. The narrow lanes through high stony walls offered an unknown dreadful excitement. Sitting in middle of such a lonely ravine, I really could not imagine how one kept on creating sculptures all alone without being afraid.

Now the place is well maintained. And moreover tourists are beaming all over the place. Still passing the empty caves, listening to the whispering air and walking through mystical light and shade games, was daunting for me. Mr Saini had proved that hunger of creation can overcome all obstacles and defeat all adversaries.

Large number of sculptures – different types of animals standing in rows, peacocks roaming on stone walls, workers waiting silently maintaining lines, performing folk band group as we see in marriage ceremony in rural areas and so on, were created and placed over the entire area. Statues made of broken bangles were sparkling under the sun. The use of old cold drink bottles’ cap, the decoration of statues ornamented by wasted potteries was marvelous. It was a brilliant collection of sculptures where not a single one was influenced by anything other than creator’s thought. And the way they were placed in groups, was not only unique but was also a symbol of harmony. The inimitable thinking of creator made the park gorgeous and attractive to everybody.
After more than an hour walk we reached near the exit. A beautifully organized team of sculptures waited there to bid us goodbye.
After coming out of the park, my concept on beauty was modified, my definition of creativity and intelligence had changed. I was overwhelmed by that knowledge enriched trip. I felt I had just completed a good book full of originality and inspirations.

About the Author: Soumi Ray – a PhD student of Indian Institute of Technology, Roorkee. I love to explore unknown and less-known beautiful places, to do hike in Himalaya and to share the stories with all. I write in my blog- http://soumizdiary.blogspot.in/. Blog is written in English as well as in Bengali, my mother tongue.