The Resiliency of Sarajevo: Forgiveness in the Balkans 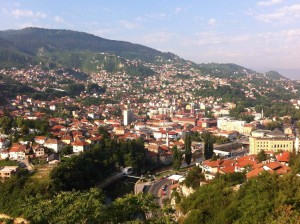 The Bosnian capital of Sarajevo is a testament to the resiliency of human beings. The victim of the longest siege in modern military history, Sarajevo today stands as a glimmering example of the power of forgiveness and the need for remembrance.

In the early 1990s, the former nation of Yugoslavia was dissolved. Though unified for over 80 years, the individual ethnicities that had comprised Yugoslavia opted to form sovereign nations. This decision triggered a series of bloody civil wars that ripped Yugoslavia apart, as each group tried to expand its territory. Caught in the crossfire of these conflicts was the city of Sarajevo.

Located at the heart of modern-day Bosnia and Herzegovina, Sarajevo is a city of breathtaking beauty. Sandwiched between mountains, the city pitches and rolls over the slopes, a postcard brought to life. Its architecture was shaped by its location at the crossroads of Europe, having seen four centuries of Ottoman dominance followed by decades of Hapsburg rule. In a single block of Sarajevo, buildings change from Old World Ottoman to 19th century Neo-Baroque in a matter of meters. The closest one can get to time travel. From the heights overlooking Sarajevo one can see church spires intermingling with minarets, a perfect illustration of the city’s pride in religious tolerance. This beacon of tolerance and cultural exchange was almost extinguished, but Sarajevo’s resolve is beyond measure.

For over three years, hell rained down on Sarajevo from the hills. Much of its beauty scarred if not destroyed. But the city has risen from its own ashes. From the caligraphied interior of the Bey Mosque, the most important house of worship for Bosnia’s Muslim population, to the Holiday Inn, Sarajevo’s symbol of westernization, extensive restorations have returned Sarajevo’s magnificence. Despite these renewal efforts, the city still bares many wounds. The facades of numerous buildings remain pock-marked from gun fire. The so-called “Sarajevo rose”, impact craters caused by exploded mortars, mar numerous streets. Sarajevo has embraced these blemishes and offers them to the world as a cautionary tale of our own capacity for violence.

Walking Sarajevo it is impossible not to marvel at its people and their pride, courage, and forgiveness. They are immensely hospitable and friendly, so much so that it amazes when one considers the great hardships these gracious people experienced such a short time ago. When Sarajevans describe the adversity that faced their city, there is never bitterness in their voices. They acknowledge that terrible events happened, but always end their comments by stressing that the war is over. There is peace and Sarajevo is proud to welcome visitors once again. No one place better exemplifies the spirit of modern Sarajevo then the Tunnel of Hope. Though only a 25 meter section of the tunnel stills exists, it once stretched underneath the entire Sarajevo airport, the UN safe zone during the siege of the city. It served as Sarajevo’s sole lifeline to the outside world. To enter and pass through this painfully small space is to know the lengths people will go to survive. The tunnel is now open as a memorial to those who risked so much to protect their families and city.
Time spent in Sarajevo far surpasses rewarding. It fills you with perspective and awe, seeing a city rebuild without malice and a war-stricken people espouse peace and not revenge. Sarajevo is an inspiration.

About the Author: My name is Bill Hoversen. I am a history teacher from Chicago, Illinois. I began travelling intensively after spending a summer teaching in Vietnam. I currently live and work in Budapest, Hungary.

Welcome to South Africa
Batanes, Philippines: Heaven on Earth
Memories galore on the beach in India
Getting lost in time in Indonesia.

One response to “The Resiliency of Sarajevo: Forgiveness in the Balkans”