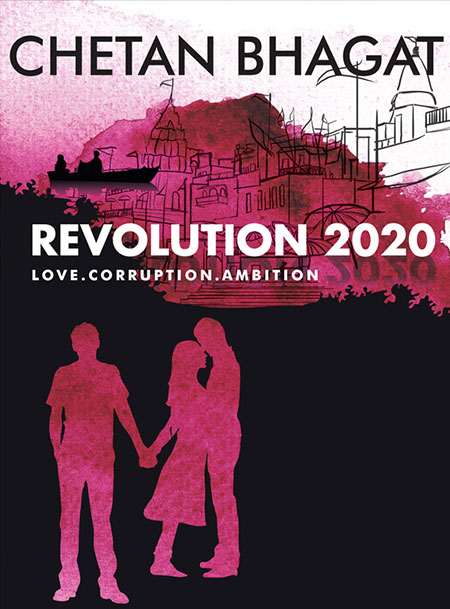 Reading Chetan Bhagat‘s Revolution 2020 in December 2012 while traveling by bus throughout India, it has seemed that art imitates life. The newspaper has been alive with the protests in the street with the “pink revolution.” The people of India are angry about the mistreatment of women and the lack of government response and protection.

The book chronicles the story of Gopal, a man from Varanasi, one of the oldest cities on earth: “People came here in 1200BC. The city gets its name from two rivers, the Varuna and Asi, both which pass through the city and meet at the Ganga.”

The story described how many Indian students study intensely for the AIEEE (All Indian Engineering Entrance Exam) for college placement, and also for the top school test — the ITT JEE (Indian Institute of Technology Joint Engineering Exam). The AIEEE attracts ten lakh students annually for thirty thousand seats at National Institutes of Technology (NIT). Readers not from India may not be familiar with the testing structure but are familiar in their own countries with intense stress pushed on students to compete and achieve, chronicled recently in the American movie Race to Nowhere.

After achieving a score of 52,043 on the AIEEE, Gopal essentially felt his options for a good life were over and contemplated applying for a job at Café Coffee Day (similar to Starbucks). His best friend, Raghav, achieved a score of 5,820 and an all-India rank of 1,123 — which meant any school or NIT was in his reach, akin to an all-access pass to Harvard, Yale and Stanford Universities.

Gopal moved to Kota, the capital of ITT coaching classes, costing tremendous amounts of money that he and his father could barely afford.

In fact, Kota has small coaching shops to coach you to get into the top coaching classes. From there, you are coached to get into an engineering college. Once there, you studied to become an engineer. Of course, most engineers want to do an MBA. Hence, the same coaching-class cycle would begin again. This complex vortex of tests, classes, selections and preparations is something every insignificant Indian student like me has to go through to have a shot at a decent life. Else I could always take the job of Birju the watchman or, if I wanted it simple, hang myself like my erstwhile room-resident Manoj Dutta.

This feeling that there are winners and losers, that some get access to the good life, led to the beginning of the revolution that Bhagat talked about. On the streets in India, women are not safe. But sadly, they are not safe at home either. India is ready for a change in how success at work, marriage and life are all defined and carried out.

In Gopal’s world, life was hard. “We are losers. We don’t get things easily. Marks, ranks, girls — nothing is easy for us.” With a superior ranking, Raghav easily got into school of his choice, but instead wanted to be a journalist and change the world. His first magazine BHUkamp, started with an expose on the disgusting state of his school’s kitchen. “It starts here. We will shake the world.”

“Gopal stated, ‘Sorting out our own life is hard enough.’ Raghav wanted to clean up the Varanasi River, the school’s kitchens, and create a new reality.”

After engineering school, Gopal learned, “Forty pe cent of students don’t get placed? This could be worse than Kota, to finish your degree and get nothing at the end.” Someone shared other options and Gopal exclaimed, “Finish engineering and join a call center?” An acquaintance of Gopal, Vineet, told him, “Don’t be so shocked. We, like millions of other students, are the losers in the Great Indian Education Race. Be happy with whatever you get.” This scarcity of employment, success and the good life, creates a second and even third-class of citizens in this country.

The remainder of the book detailed the incredible level of corruption and bribes in relation to the Indian education system. Sunil, Gopal’s friend, stated, “You have land. You will open a college. Most people who own colleges in India haven’t [been to college]. Stupid people go to college. Smart people own them.” The pulse of good and evil between the two friends, those who have and have not been to college, have money or have love was an ongoing dynamic.

In the story, Raghav’s goal was to create a Cultural Revolution in India by 2020, the power being transferred to the youth. Over the last few weeks, watching the youth of India assembled in Delhi and other cities after the gang-rape and murder of a 23-year-old physiotherapy student made it seem that the revolution may occur sooner rather than later, well before 2020. “We will dismantle the old corrupt system and put a new one in place.”

Which side will be triumphant in this giant land called India? Will it be the country that allowed Gopal’s college to be built on corruption and bribery, or Raghav’s ideal, “A society where truth, justice and equality are respected more than power. Such societies progress the most.”

The front page of the Times of India on January 22, 2013 reported that “The fast-track court begins its hearing.” The article stated:

A DNA investigation of bloodstained clothes and body swabs has linked all five men and a juvenile accused of the gang-rape and murder [on a moving bus December 16, 2012] of a 23-year-old physiotherapist in New Delhi to the crimes providing evidence the prosecution claims will be enough to convict them. However, the case against the men may not be open and shut in a country where shoddy forensic practices are one of the chief reasons for a low conviction rate in rape trials.

As the Reuters piece suggested, there may yet be more cause for revolution in this country.

The back cover of Revolution 2020 stated this story is, “about childhood friends Gopal, Raghav and Aarti who struggle to find success, love and happiness in Varanasi. However, it is not easy to attain these in an unfair society that rewards the corrupt. As Gopal gives in to they system, and Raghav fights it, who will win?”

In the words of the author, Chetan Bhagat, “And I hope not just you but our whole country will keep that spark alive. There is something cool about saying — I come from the land of a billion sparks.” Maybe 2013 is the year where the sparks come together to create a fire that will create the new paradigm for India in the coming century.

This article first appeared in the Huffington Post World section on January 28, 2013

About the Author: Lisa and George Rajna met online in 2007 and started traveling together internationally almost immediately. By 2008, they had quit their jobs, rented their condo and left for a year on the road. After eleven countries, twelve months, losing sixty pounds and getting engaged underwater, they returned to Los Angeles. On July 1, 2012, the next year long adventure began in Indonesia, Thailand, Myanmar and now India.

Lisa Niver Rajna, Wandering Educators Geography Awareness Editor, was recently on National Television as a science teacher on the show Career Day. She is a 2012 nominee for the Presidential Awards for Excellence in Math and Science Teaching, and a member of the Traveler’s Century Club for travelers who have been to over one hundred countries. She and George are spending a sabbatical year in Asia. Follow their travels at We Said Go Travel.