Are you ready for “The Divorce Diet?” 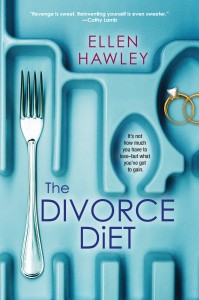 I drop Rosie off at the neighbor’s and carry my groceries in. It feels odd not to have Rosie in one arm—kind of lonely and off balance.

It also feels free. Light. As if I’ve lost weight already. I’ve been planning this dinner all week and want to give it my full attention.

Step one, then: the cake.

In the double boiler, I melt bittersweet chocolate imported from Belgium, which I’ve been saving for a special occasion. When the last island of solid chocolate gives itself over helplessly to a liquid state, I stir in unsalted butter and they wrap around each other like lovers. I would drown in them willingly.

I pour in crème de cassis. I’ve never used this before and it’s gorgeous stuff, jewel red and glowing as if it was made of light.

I add egg yolks, espresso powder, flour, thick shavings of white chocolate. When I fold in the egg whites I’ve beaten with salt and sugar, the batter looks like velvet.

Okay, not exactly like sex, but it does make me think about sex.

Everything makes me think about sex.

Which shouldn’t surprise me, really. It’s been a while.

I set the cake in the oven, melt semisweet chocolate and brush it onto some small, perfect leaves I picked in the back yard, and I balance them in the freezer. I melt more chocolate for the frosting, stir in more butter, and watch them wrap around each other like—can’t I think about anything else this afternoon?—lovers. I stir in the sugar, the cream, the vanilla, and imagine painting Thad’s belly with it even though he doesn’t go for that sort of thing.

I cover the frosting so it won’t harden while I run across the street to pick up Rosie.

She flaps her arms at me and coos.

I pick her up and say, “Are you Mama’s gorgeous baby?”

I thank my neighbor and carry Rosie to my kitchen, where I put a fingerful of frosting on her tongue and one on my own. . . .

I take the cake out of the oven and put Thad’s potato in, and I nurse Rosie and wash Rosie and walk Rosie and lower Rosie into her crib. I put clean sheets on the bed, turn down the corner on Thad’s side, and arrange candles in a romantic configuration on the bedside table.

By the time I’m done, I’ve completely seduced myself. How could he not feel the same way? . . .

At seven-thirty I light the candles on the dining room table so they’ll be burning when Thad walks in. He’s had to work late a lot recently; it’s no wonder he’s been cranky. Starting today, I will be more understanding.

By eight I’ve blown the candles out so they won’t burn down too far.

When he gets home at nearly eight-thirty, I relight them.

Dinner: For me, marinated skinless chicken breast that may or may not weigh 3 ounces; salad with no dressing; slice of cake no bigger across than the width of my thumb because it would be rude to make Thad eat birthday cake by himself, and besides, I don’t want to insult the cook. For Thad, chicken breast with sour cream gravy; baked potato; sort-of Caesar salad with homemade dressing; French bread with unsalted butter; slice of cake.

Thad looks miserable and picks at his food. . . .

Keeping my voice casual, I ask, “Is something wrong?”

Okay, this isn’t the time for casual. I lean forward and say, “Thad, tell me. What is it?” I sound so understanding that it’s a wonder I have to ask. I would tell me anything.

He mashes cake into the plate with his fork and looks into the mess he’s made. He looks at his napkin, his coffee spoon, his watchband. They’re all easier to look at than I am.

I can’t seem to find the end of my sentence.

I have a very bad feeling about this.

He looks up. He says, “Okay, I’m going to come right out and say this, okay? I’m just going to say this. It’s this whole marriage thing. It doesn’t work for me.”

. . . I know things aren’t perfect, but there is no way this can possibly mean what it means.

I stare at Thad blankly. My mind shuts down and my body stands up. It walks to the window and looks out. The tree outside has leaves. Each leaf is separate and perfect. I have never seen leaves as purely as I see them at this instant. I never knew they were so beautiful.

I turn around and see Thad, who is separate but not perfect and who has chocolate smeared on the corner of his mouth.

I have to say something. My marriage depends on me saying something.

Which is not the thing I need to say. I know that.

I say, “What do you mean it’s not me?” and I know this isn’t the right thing either but it says itself. The words coming out of my mouth have nothing more to do with me than the way Thad feels about this marriage thing. They wandered in from the conversation every couple in the country have when they split up, tagging behind It’s not you, it’s me like a pesky little sister.

Any minute now, he’ll ask if we can’t still be friends.

Except that we can’t be splitting up. Other people do that. The two of us, we’ll be fine.

“It’s just—. I’m having trouble with the whole idea of marriage,” Thad says.

Thad’s staring at the table. At the dishes, actually, so I snatch them away and hustle them off to the kitchen as if all of this was their fault.

I set them down harder than I meant to.

It’s okay, I tell myself. None of this is really happening.

Thad’s plate is thick with mashed-up cake and I scrape a finger through it.

Exercise: I tell myself to go back out there and fight for him.

I wipe my fingers on the dishrag, blow my nose and march into the living room, ready for battle.

Thad’s turned on the TV.

“You can’t just end the marriage and not tell me what’s wrong,” I say.

He stares at the floor. Somebody on the TV laughs.

He tells me again that it’s all his fault. I’m sure he’s right about this, but it’s not the point.

I stomp into the kitchen and wash dishes, then stomp back to the living room.

He tells me what a shit he is.

I don’t try to convince him that he isn’t.

I stalk back to the kitchen and cut myself a slice of cake. . . .

By the time I get back to the living room, Thad’s making a bed on the couch. The TV’s still on.

“You’re better off without me,” he says. “It hasn’t been much fun for either of us lately.”

“It hasn’t?” I say, sounding as if this was news to me, which in a way it is. Yes, we’ve been snappish and critical and less than ecstatically happy, but that happens to people. It doesn’t mean we have to end our marriage thing.

I take the cake out of the oven.

Snack: 1 slice of cake the width of my palm.

Exercise: I double wrap what’s left of the cake and hide it in the laundry hamper, where even if I do think to look for it I’d never eat it, and I take myself to bed.

The empty side of the bed stretches out beside me like the Gobi Desert. Even in the dark I can make out the unlit candles on the bedside table.

He could at least have told me what a nice meal I made before he said he was leaving, I think.

Abigail Marie, I think, you are such an idiot.

He can’t leave me, I think. He has the only income.

I roll over and try to stop thinking.

I am twenty-five years old, I think, and my world is ending.

I lie awake for a long time, wishing I was asleep, and at some point either I wake up or else I stop trying to sleep, I can’t tell which, and I walk to the living room, where I listen to Thad snore.

I’m not sleeping, I think.

That is so not fair, I think.

I cut a slice of cake the width of my foot and drop it on his face.

I stand in the dark and listen to him yell but he might as well be someone else’s husband yelling somewhere down the street.

Get your copy today!

Cruising the Canaries: 7 Stops Along the Way
Unexpected Gems of Bogota, Colombia
Zipkick Blogger: Allison Foat from Cape Town Diva
What Three Travel Items Can You Not Live Without?