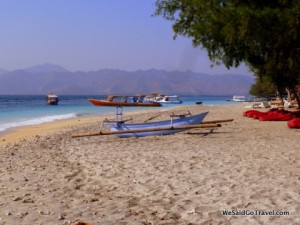 When we arrived in Bali on July 3, 2012, we had plans for a big adventure to Sulawesi and the Banda Islands but then we found out the dates of the upcoming Ramadan month. I did not think traveling in a 98% Moslem country during Ramadan was a great plan. I had been in Oman and a few other countries in 2000 during Ramadan and had experienced challenges.

After five weeks in Bali and talking with other travelers, we decided to go to Lombok and the Gili Islands during the last week of Ramadan. In Senggigi, there were no issues. We spoke to several locals with our best Bahasa Indonesia. They think we are pintar (clever) as we have belajar (learned) a tzedeket (few) words in the local language. We can count, ask for the check (bolle saya minta bone), and say, Seh-nan-bertamu anda (nice to meet you). Actually, George can speak quite a bit more words than those! He is quite impressive with his language skills.

We arrived in the Gillis and immediately noticed the large amount of new development here since our last visit in 2008 when the Gili Cat (Fast boat) had just begun. Now everyone in Amed, Padang Bai, Kuta and everywhere else had a fast boat to the Gillis. The number of tourists able to access the islands has grown immensely. 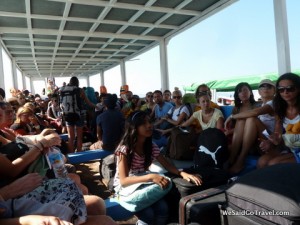 The place we stayed before, Blue Beach Cottage is not only still here but also has gtown two internet cafés, a restaurant, boat trip excursions, and a second hotel, Blue Beach 2. Everyone is getting into the act of touristic development. We remember hearing the call to prayer from a mosque on our last visit. Three years ago, a new large mosque was built next door to Blue Beach 1. As it is Ramadan, as I write this I am listening to the 10-11pm shift from the mosque.

Felt a bit like a scene from “My Cousin, Vinny:” “Does that train always come at 4am?” and the reply, “Oh no sir.” So the next night at 4:30am the train sounds start. The man at the desk says—“oh that train it was early the other night.”

The only place that has not adapted well is the ocean. All of this love for the island with fast boats, larger and fancier hotels and more people is creating a problem for the coral reef. I do not think it has been protected and that its integrity and bio-diversity are in danger.

2 responses to “Rambling during Ramadan”