Pakistan: Why I love Lahore

Pakistan: Why I love Lahore

I stood in the balcony sipping the aromatic cup of pink tea while watching the sun rise and spreading the vibrant hues of yellow stealthily over the city, bringing the heart of Pakistan to life. My gaze shifted back to the stunning Badshahi mosque as sunlight lit up the beautiful architecture of this fifth largest Mosque in the world that has been depicting the Mughal grandeur since 1673. I stood in awe devouring the splendor of this majestic mosque.

Sometimes I wonder why I am so in love with Lahore? And I hear my heart whisper that reasons to fall in love with this amazing city are countless! From a two months old baby to a Mom of two, it has been ages since I am dwelling in Lahore and still Lahore continues to surprise me every day, mesmerize me with its beauty, hustle and bustle and of course, love for food.

If you have a profound interest in history then Lahore is destined to leave you enthralled with its historically rich culture. The inner city of Lahore, a very densely populated area was once surrounded by a 9 meter high brick wall with thirteen gates making this Walled city one of the oldest cities in the world. The Lahore Fort built inside the walled city by Royal Mughals is one of the greatest Forts built in South Asia and was declared UNESCO world heritage site.

However it’s not just the city but also its people who make Lahore so alive.

People are friendly, hospitable and like to dress up in their national dress, Shalwar kameez (long knee length shirts and baggy pants) as well as jeans and shirts. Urdu is their mother tongue but Punjabi is also widely spoken. And English being the official language is easily comprehended among educated masses.
A famous Pakistani proverb goes, “One who has never visited Lahore is not born yet.” and if you have actually had the opportunity to visit this cultural hub of Pakistan, you wouldn’t agree more! Lahore’s famous Food Street is a heaven for those who appreciate fresh food, wide variety of local dishes made with aromatic eastern herbs and spices, the rich curries, spicy gravies, assorted sweetmeats, BBQ platters that tantalize one’s taste buds. It is said that Lahore never sleeps and the same applies for Food street. Street food all over the country is Halal and simply awesome. You just got to locate the most popular hygienic stalls.
Rickshaw is a popular mode of transport here apart from taxis and buses. This brightly colored three wheeled noisy ride with interesting quotes and poetry written at the back makes its way through the traffic jam hastily, bouncing on the slowdowns of the roads, producing a loud traaaaa sound. For inter-city transportation of goods, trucks with wooden carved doors and various floral designs painted in bright colors over the vehicle’s entire body are quite popular.
A seasonal festival that is most enthusiastically celebrated in my city is “Basant”. This festival is celebrated during February to celebrate the arrival of spring and is a major tourist attraction. On this day kites of different colors, shapes and sizes adorn the clear blue sky. Families gather on roof tops to witness the art of kite flying. The colored sharp strings of kites tangle and pull as both kite flyers use tactics to cut the other kite’s thread. Gazes fix in the sky, suspense mounts up and as soon as victory is announced, enthusiasts in family and friends rejoice by hooting and performing “bhangra”, a traditional dance done on the beat of drums.

Catering to the needs of all, Lahore is a shopper’s paradise with malls laden with latest fashionable variety. A 100 Pakistani Rupees is equivalent to approx. 1 USD. Whatsoever is your budget, you can find great stuff at affordable prices here. Ranging from Designer brands to inexpensive stuff, traditional handicrafts to intricate hand embroidered Kashmir shawls, the Persian and Afghani hand woven carpets, Lahore has it all. Lahore is the most popular city but can be really hot during summers.
While standing on the balcony, suddenly I spotted the first vehicle on the empty road. A horse carriage being driven by an old man. The sound of the horse shoes hitting the road was audible in the stark silence of dawn. Soon the vacant roads of Lahore will start getting flooded with vehicles as Lahoris wake up and leave their homes in pursue of bread n butter. Soon the traaa of rickshaws, the Tongas of inner Lahore, smoke arising from the wagons and buses on roads will bring to life these empty roads. I took my last sip of tea and stepped inside. 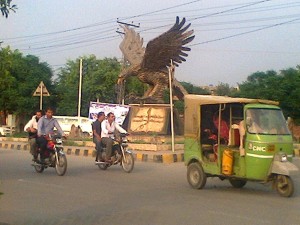 Iram Moazzam is a freelance writer from Islamabad who considers writing as her ME time. She also enjoys making 3-D fondant cakes and running her Face Book page "Small cakes, big smiles."

13 responses to “Pakistan: Why I love Lahore”