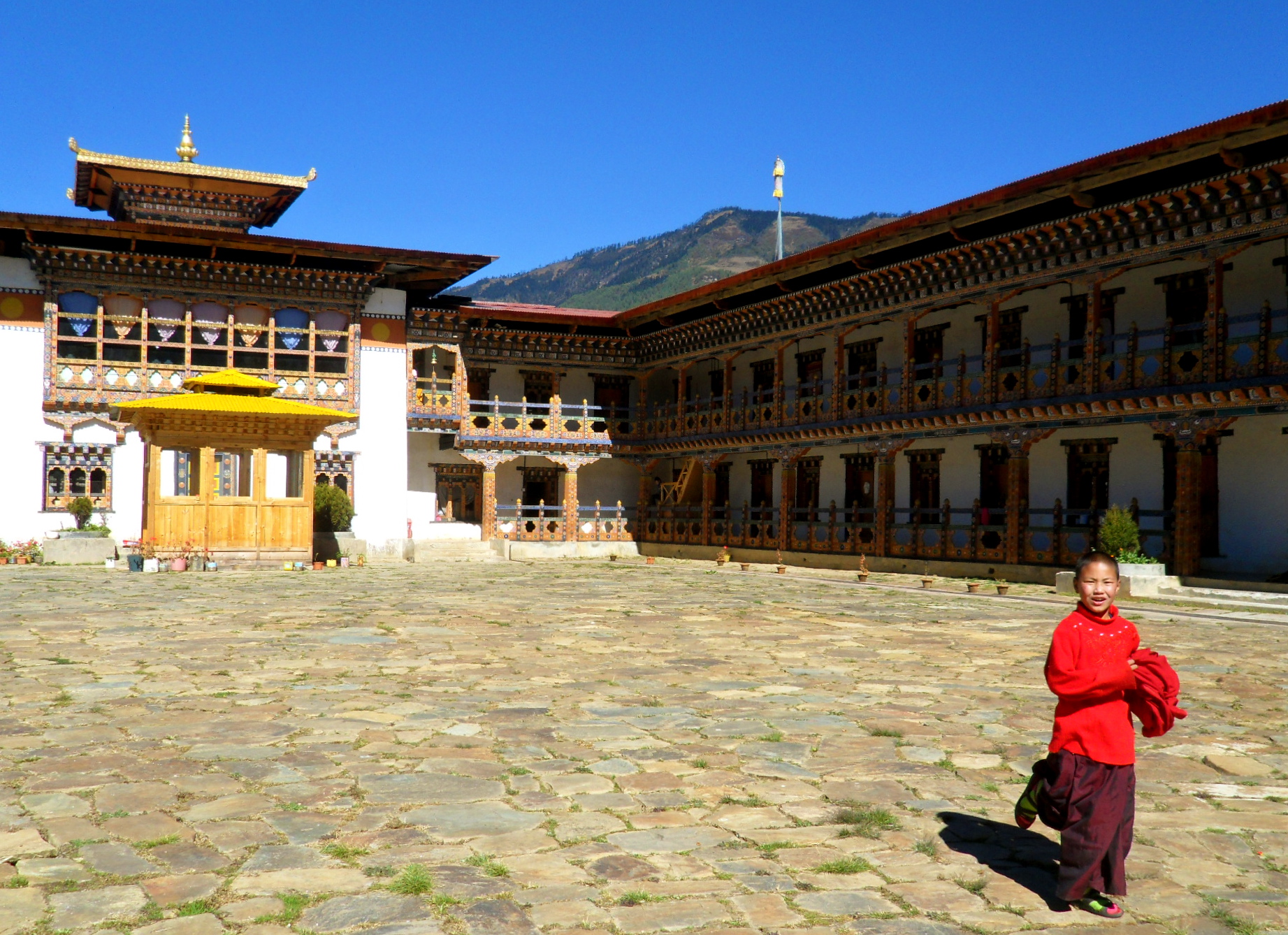 “Om Mani Padme Hum, Om Mani Padme Hum . . . (Hail to the lotus one!).” For several months, every morning I blissfully woke up to the repeating hums passing outside my window; the beloved morning routine of a vibrant seventy-seven year old Buddhist nun circumambulating the nunnery with a prayer bead in her left hand and a spinning prayer wheel in her right, emanating waves of blessings for all sentient beings.

I would watch her passionately pray on by until her rich pomegranate robe flashed out of sight around a corner for another round along the most spectacular monastery in the world, The Pema Choling Nunnery, which is virtually unknown to the outside fast paced world. It’s hidden deep in the folds of the Himalayan Mountains perched on a flat mountaintop in the last tantric Buddhist Kingdom on earth; Bhutan!

The mystical nunnery can be reached by a jagged, dirt road. The long, bumpy ascent is worth the panoramic views of colossal mountains after mountains covered in pine trees that sparsely open up to scattered villages and variegated fields. The nunnery itself is equally breathtaking: A two story classical, white washed monastery with ornate edges and built by the loving hands of the nuns themselves.

Infused with love, the nunnery radiates tingling energy while walking through its motif-framed doorways leading to a beautiful stoned slab courtyard. The first time I entered it under an open sky and barricaded by mountain peaks, I became under a magical love spell as I did several slow 360 degree turns taking in its beauty: An array of colorful potted flowers outlining the perimeter, a glowing temple with hundreds of sparkling butter lamps, the smell of sweet incense drifting under doorways… Out of the dozens upon dozens of monasteries I had visited over the year, it was the most awe-provoking monastery of them all!

I was in heaven to be able to call this my new home when I became the monastery’s first foreign English teacher. However, I also came to be the nuns student; not necessarily a student studying Buddhism, but a student learning about the simplicity of life – something that’s not taught in the curriculum of Western schools; something that may be learned through deep reflection of life experiences or in my case, from living on a remote, peaceful mountain with over a hundred nuns ranging from age 6 to 77.

My first life lesson I learned at this magical place was easy to grasp as it smacked me in the face from the moment I arrived when plans seemed to always change. For instance, one minute there was class, but the next minute it was cancelled for a puja (ceremony); one minute there was a trip to the market, but the next minute it was on hold for collecting firewood. Unlike most Westerners, the nuns never seemed to be in a hurry, as though there was no such thing as time. They weren’t attached to schedules; as a result, they didn’t suffer when things abruptly changed. Slowly I learned to be like the nuns and accepted that “things are always changing,” which became my new motto. And weeks later, I added a second half to my motto that was the true gem of it: “… so go with the flow.”

However, my favorite and most valuable lesson came from admiring the pure sweetness of the nuns golden hearts. They demonstrated gentleness to every living creature, including the ones most people consider varmint: Mangy stray dogs, dirty rats, thirsty mosquitoes… I had never met people who were as compassionate as the nuns, as they educated me about the cause and effect of karma – ones accumulated merits from good and bad deeds resurfacing as positive or negative events in ones life.

They showed me how to gently remove an insect from my room without harming it, and they even urged me not to let my adopted, stray cat kill rats on sacred full moon nights in order to help my cat create less bad karma. I half laughed inside thinking about how my Western friends would have thought that these traditional bald nuns were insane, but the other half of me didn’t dare chuckle because I knew that they were the wisest group of women on earth. The nuns knew a simple secret to life, yet more importantly they practiced it wholeheartedly: Love every single organism, big or small, without discrimination!

The nuns became my greatest teachers showing me numerous simple secrets to a peaceful life that were in plain sight. The stunning nunnery hidden by the great Himalayas of Bhutan was more than my home, it was a mystical place that taught me to go with the flow of impermanence and love all creatures.

About the Author: Sabrina Soares from California is an elementary teacher who loves adventures. She is currently self-publishing a book about fear, love and change based on her year long experience teaching in Bhutan, which was inspired by many requests from her blog.

Jaipur, India Lit Festival
Time Is Of The Essence in Spain
Gurudongmar, India:A tale of handcuffed heartbeats!
Puerto Rico: The Island of Relaxation

One response to “Bhutan: Nuns Secrets to Life”