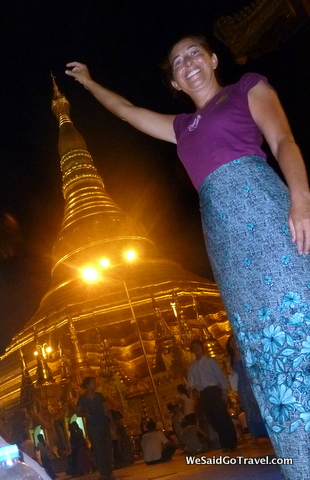 George and I arrived in Yangon at night and took a taxi to the center of town. We had read about many hostels before we left Bangkok, but were not sure where we would stay in Yangon. We did not change money at the airport as the Lonely Planet says not to, but that would be our first error. When it was printed, the rate was 1000K to $USD 1 and the airport rate was 450K.

But on September 28, 2012, the rate was 854 and the airport rate was slightly higher. The woman at the taxi stand in the airport gave us free maps, which were wonderful. The map had Yangon, Inle Lake, Bagan and Mandalay.

Anke, Moritz, George and I arrived and were escorted from Sule Pagoda area to Beautyland II. Although we ended up staying, it was not because we liked it best, George and Moritz just liked the others less.

Our room was $USD 33 (normally $36, but the air-conditioning was broken so we got $3 off and a second fan.) The large window is the subject of our next video!

Thank goodness we had two fans! It was hot at night in Yangon in September.  This movie is from our 28 days in Myanmar (Burma) from September 28, 2012 to October 26, 2012 and our year-long trip in Southeast Asia, see all the videos from our trip.


About the author: Lisa Niver Rajna was recently published in National Geographic and The Myanmar Times. Nominated for the 2012 Presidential Award for Excellence in Math and Science Teaching, she is on sabbatical this year in Asia. Follow her journey at www.WeSaidGoTravel.com.