My Motorhome Adventure Across America – Bertha and Me

I guess you can say that I’ve always wanted to live in a motorhome – only I didn’t realize it until I actually drove one around the Unites States one and a half times! 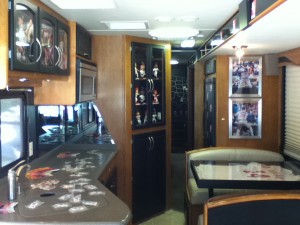 So how and why does one drive around the enormous but beautiful country in such an odd loop you ask? It’s quite simple: that’s what I was paid to do. The beautiful thing about my jobs at home in between my own adventures is that I actually get paid to travel. Out of the four and a half years I’ve spent on the road, 12 months of it (respectively) were getting paid to discover America the Great.

Cheesy I know. Although, you have to realize that I was never interested in traveling in my own home country until I actually did it. I always figured that international destinations were my first priority and that I’d eventually get to it later on in life. Little did I know what a magnificent country the USA really is. No wonder no one has passports!

Well the opportunity arose sooner rather than later. In 2011, I got to ride a super decked out motorhome from Florida to Los Angeles, up to Utah then across the country all the way to the East Coast and back down again to Florida, finishing my tour of the States in Arizona.

The places that I witnessed in my motorhome journey were mind blowing. I had no idea that the US was home to an enormous treasure trove of carefully laid out secrets.

Bertha and I, that’s the name I gave to my trusty motorhome, shared unique and memorable adventures. We marvelled at the Salt Flats as we entered Salt Lake City, we were nervous as we tried to maneuver through the tiny streets of New York City, we battled tornadoes together in the Mid-West, we chilled out on the beautiful white sand beaches in Florida, and we were mesmerized by the blue and purple hues in the mountains of the South West. We even had fun at gas station stops enjoying ham and cheese sandwich lunches together in between long driving periods of up to 18 hours at a time. 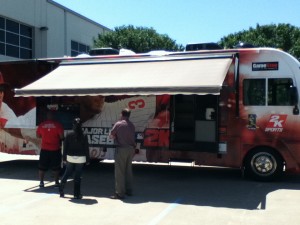 These adventures and so much more were the reasons why I fell in love with my Bertha. Not to mention, my motorhome was fit for a king (or better yet, queen)! We hosted sports celebrities in different cities and invited them to do signings for fans inside the motorhome. You know that this wouldn’t be possible if the vehicle didn’t look like it underwent a sparkling make-over on “Pimp My Ride”.

From plasma screen tvs to several XBOX connections, a massive sound system, leather interior, a fridge fully stocked with beer (for the celebrities of course) – driving this motorhome set the bar higher than imaginable.

I can’t wait to do my own extended trip across the States in a motor home of my own. I even picked out the one I want. Much more humble than my celebrity approved motorhome, there is so much more of my home country I just can’t wait to discover.

Jess Collins is a globe-trotter and aspiring writer who has recently discovered a passion for motor home touring. Her writing can be found on several websites blogs including Tourer Trader.

One response to “My Motorhome Adventure Across America – Bertha and Me”