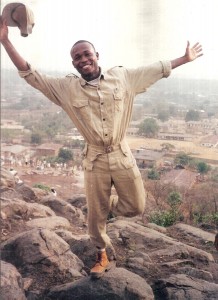 I actually did my one year voluntary National Youth Service Corps (NYSC) programme after graduation in Ondo state, south west Nigeria. The state is five times bigger than Lagos state-Nigeria , the commercial hub of the entire West Africa  and most populous city in Africa. However it is sparsely populated having less than one tenth the population of Lagos state.

For want of space l may not describe all the places visited , but l would want to briefly highlight Ikare-Akoko, one of the mountainous areas of the state , which is also an ideal location for both local and international tourism. Ikare –Akoko is one of the uplands of the state. The mountains are sedimentary and metamorphic rocks formed mostly from earth movements and fossilization of the rich natural vegetation of the state –which lies along the rainforest belt.

One of my favorite photograph on the uplands  of Ikare Akoko –Ondo state in Nigeria. It was shot during my National Youth service orientation programme just opposite the campsite.

The uplands are beautifully shaped to bring out its natural landscape,  and serene topography of the area. No wander the government deemed it fit to create a magnificent youth camp for the training and orientation of Nigerian youths both from home and overseas. The NYSC programme organized in Nigeria is similar to the Peace Corps programme in the United States of America and one year military service in Israel-for all youths.

The people: Very peaceful, easy going and mostly agrarian- farming being the predominant occupation of the people. Root crops, tubers, melons, felling of timbers are some of the ‘million dollar businesses’ in the area. Also education is a big industry. I must say here that every family in Ondo state has a graduate –at least- from an institution of higher learning (University, Colleges  etc which are also in abundance in the state). The state is said to have some of the highest number of professors in  Nigeria. At least l am a witness to their educated mean and hospitality.

The food: “Yam putting” called ‘inyon’ in the local dialect and ‘melon seed soup’  also called ‘egusi soup’  locally,  garnished with bush meat is among the best delicacy in the locality. I must confess that I helped myself with a lot of it until l nearly ran into stomach troubles – it is absolutely delicious. Fresh vegetables are in abundance and l fortified myself too with a lot of it too.

Transport: This is mostly by cab. Buses are few as virtually every household owns a car. I was surprised to found out that the area has some of the most developed cab system in the country- and one of the cheapest too.

Land of Great Men: The state has produced a good number of statesmen like late Pa Adekunle Ajashin of which the state university is named after. The University is located on the outskirts of Ikare. Another good mention is the late eminent lawyer and human rights activist-Chief Ganni Fawenhemi SAN(Seniour Advocate of Nigeria). One of the best disease  Diagnostic Laboratories in the entire Africa was recently built and commissioned in the state and named after him(Chief Ganni), by the current state governor chief Olusegun Mimiko.

About the Author:  My name is Bede Adazie. I was born some 35 years ago. I am currently a Volunteer teacher -with the Lagos Eko Projects Volunteers Teacher’s Scheme-and also doing some homeschooling for students in Mathematics/Sciences. Find Bede Adazie on Twitter and Facebook.

Turkey: Visiting the House of the Mother Mary
Bring Dignity to Children with Bags of Hope and Savinar Luggage
Motorbiking Vietnam: Losing Myself
Canada says, “I Do” celebrating ten years of Marriage Equality

2 responses to “My Journey in Nigeria -Ikare Akoko- Ondo State”