The escarpments slowly faded in the rearview mirror the further west we traveled. Spinifex grasses began to stretch into the horizon, following the flat flow of land. It seemed as though the air outside of the ute had become drier, brighter. The earth was tanned and cracked with no trees from highway to horizon. We turned left onto the Birdsville Track and began the 280 kilometer trek deeper into the outback. 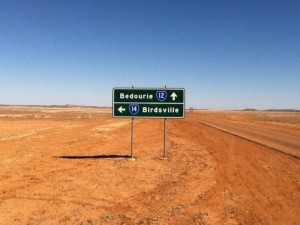 Most of the road was sharp gravel, except for short stretches of asphalt that also served as emergency airstrips. The ride was jarring, a constant hum of tire over stone served as our music down the highway as we chased the setting sun over sand dunes and around escarpments. There was not a single town we passed and only occasionally another vehicle, it was truly remote.

The sun became too intense by around 5:30 PM so we pulled off to watch it set. We climbed a sand dune, blood-red in the evening light and watched as the sky turned intensely orange and yellow, slowly mellowing to pink and lavender. After a short time we were enveloped in a velvety blackness with bright white stars quickly filling the inky abyss above. 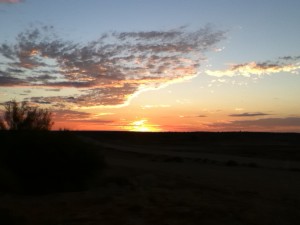 We continued our journey to Birdsville, dodging roos the whole way. After a few hours we could see lights on the horizon, the only lights aside from our headlights and the sparkle of stars. The streets of Birdsville were fairly deserted but the pub was well-lit and full of people. We found a campground, set up camp and enjoyed the first shower we had in days. I felt like a new man, still high from the day’s find as I crawled into my warm swag and drifted off into a deep sleep.

The next morning I awoke to the cackles of Crows. Everyone in the campground was already awake, moving about. Laughing families mingled with the smell of bacon and toast on the breeze. Lockie and I began packing up our swags, ready to explore Birdsville for a bit, then head to the Mitchell Grass Downs, better known to us as the Taipan Plains.

As we threw our gear into the bed of the ute, Lockie looked down at the tires. The front passenger side tire had a significant puncture and sat nearly flat. We looked at each other, knowing full well how serious a flat tire would have been on the road, potentially hundreds of kilometers from the nearest town. 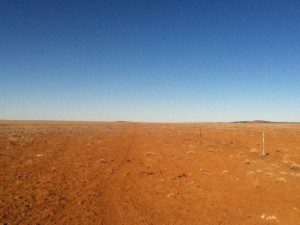 Lockie carefully drove to the nearest gas station; we filled up on diesel and supplies, then made our way to the mechanic whose faded sign once proudly stated “We Fix Punctures!” He was a short man with a gaped smile and decent stomach that protruded slightly under his jacket. After a short wait, he popped the tire off and began grinding the rubber.

The garage seemed to be the meeting place for many travelers; I met old men from all over Australia, a short woman with dreadlocks, and two men trying to rent a semi-truck from the owner. I chuckled to myself when I glanced into the trashcan, it was full of XXXX Gold beer bottles; remnants, no doubt, from the end of a long working day. A short time passed before the mechanic finished and reassembled the tire and we were on the road again.

Just on the outskirts of town we pulled into a sacred ceremonial spot that was the stopping point for Thutirla Pula Dreamtime Story. It was the tale of two boys that crossed the desert to bring far-flung tribes of the east beautiful feathers for ceremonial decoration. The boys and the tribe met there, in Wirrarri (Birdsville), to celebrate and share the feathers.

I always felt humbled at sacred places such as Wirrarri, it was as though I could feel the guardians watching as we meandered along the winding path. A flock of six Brolgas ungainly sailed above us, their long legs hanging awkwardly; Zebra Finches, with their sharp tweets, flashed about us, pausing only briefly. 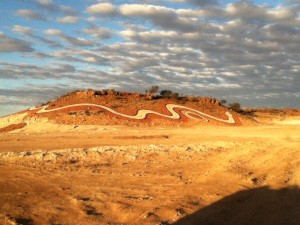 We returned to the ute and rumbled back down the rocky highway. By the time we arrived at the Taipan Plains it was almost dark. We quickly set up camp, built a small fire and cooked supper. A feral cat persistently strolled through camp, desperately trying to find scraps of food. Lockie and I settled in for the night, I left my swag open and gazed at the night’s sky.

Satellites slowly passed overhead. The moon hung only halfway in the sky, but the stars had never been clearer. There was not a cloud in the sky, the Milky Way reached from horizon to horizon and painted the black night almost white. I looked to the open plain on my right; the grasses were silver, ghost-like. Somewhere out there was the world’s most venomous snake and we planned on finding it in the morning.

One response to “Australia: Heading West- Birdsville and Taipan Plains”