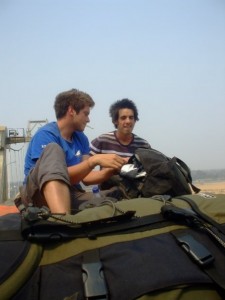 “I lost? No freaking way!” A Mozambican man in a stained vest and cheap sunglasses, rolling a matchstick in his mouth, had invited himself to play a card game with me. He had lost the game we had played, and his pickled, uncoordinated mind had left him confused.

I had been sat on my rucksack on the corner of a crossroads in Vilankulos for hours. I had planned to go north to Chimoio, but the roads that connect the two places barely existed; left by the civil war. I had heard they were potholed, and undefined, so Chimoio could only be reached by large eighteen-wheeler trucks. Local knowledge was that a few pass this place everyday and very happily pick up travellers from this corner. The surrounding landscape was wide open, barren scrubland albeit the odd spots of acacia trees. Behind me were three wooden huts, displaying jars of bubblegum, bunches of bananas, water and cigarettes. They were manned by a tired breastfeeding mother. Two more children were sat close to her, braiding each other’s hair. 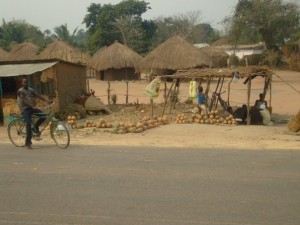 The sun rose along with human activity. A few people had gathered to wait with me. I stared down the road at regular intervals and eventually, an eighteen wheeled truck crashed in. It was carrying hundreds of sacks of rice, covered and secured by a tarpaulin. Two young men, and an elderly man with a pet dog climbed the tarpaulin with ease. I jumped up to the driver and gave him my best Portuguese, showing Meticals to enhance my words.
“Where are you going, Shorty?” he asked in perfect English.
“Chimoio?”
“OK, sure”. I gave him my bags and was pulled up by the two men. I scrambled to sit in the middle of a giant truck tyre, used to help keep the tarpaulin down. The sun belted out naked heat. I tied a jumper around my head and pulled out a book. The other truck passengers, who had secured their seats in other spare tyres smiled and nodded in acknowledgement. The truck growled and we left.

Hours later at a petrol station, I attracted the attention of a group of street boys. They rose up with their hands what they had to sell- pineapples, bananas, mangoes, hardboiled eggs, and loaves of bread. I bought a pineapple to share with the other passengers, and a couple of eggs. None of the other passengers bought anything, but the street boys didn’t offer anything to them. I took my army knife and divided the pineapple. 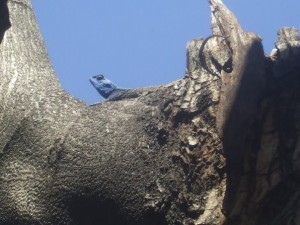 I had finished my book. I was bored. The tarmac we had been travelling on had been replaced by an uneven, potholed, dusty path. Around us was nothing but desiccated trees, bleached white. I assumed I was over half way to Chimoio when the truck had begun to rock under its suspension. Without warning, there was the zipping round of unknotting ropes and one of the men on board had slipped off the truck on a few hessian sacks of rice. The back of the tarpaulin had come undone, and the sacks of rice we were sat on had fell. Rice poured and spread over the ground like water, and a small handful of people magically appeared and flocked towards us. They fought, quarrelling in Portuguese, wrestling to grab handfuls of rice; scooping it up in upturned shirts. The truck driver jumped out, his face creased in anger and dripping in perspiration. He whipped his t-shirt at them, shouting foreign obscenities. They quickly scarpered. Some of the men helped to scoop the rice back into its hessian sacks and heave back onto the truck. It was 40 degrees centigrade.

I observed the men, bare-chested with the finest sheen of sweat picked out by the afternoon sun. They lifted the heavy bags and swung them onto the truck like small children. To them it was a favour, all in a days work. It seems poverty brings community here. I looked down at my bare legs and they were cracked, just like the ground.

About the Author: Lizza Lane: I am a 26 year old female British traveller who likes to share stories and wishes people could see what I see. If I could take my bicycle with me everywhere, that is how I would travel!

Who is a Finalist for the Southern California Journalism Awards?
Switzerland: Hiking the Eiger Trail
India: Road Tripping to the Taj
Finding the Infinite in Taiwan