Monologues of A Single Lady Travler in China 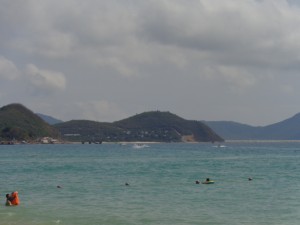 She walked in everyone was looking at her, by herself, she thought it could be paranoia. Feeling a bit uneasy by the idea of staying in a Resort by herself, no family, or friends, just her by herself. She thought, “who does that?” Then, she said to herself, ” I do!”. She began to peruse the room with her brown eyes, she noticed the families, babies, foreigners, and of course Chinese. If only she could speak Chinese, what would she say, “Hi, can I join you ?” Or, maybe “How long are you here for?” The cafeteria was buzzing with the clink and clang of dishes, little children running around, and the quietness inside her mind. She noticed women doting on their husbands and getting food, she thought Chinese women were in a way very subservient to their men in a fashion that in America, women are not quite so subservient. She couldn’t ignore the feeling of being misplaced, alone – yet, strong and courageous and she asks herself, “Is it too bold? Do people do this?” Am I the only one? Sitting at her garden table wearing a tight black tank top and skinny tight blue jeans, she realized she felt a bit out of place because she tends to forget people might be looking at her because she is black. Every time she passed a mirror she sees her curvaceous body that she feels, in this part of the world is starting to resemble Kim Kardashian. In a way, that made her a little skeptical, as she remembers the cab ride from the airport to the hotel and the driver was being a bit strange. He kept saying, “Ni Ho” with a certain look then tried to rub her leg. She quickly gave him the money and said, “Tajian” GOODBYE!! She thinks, I hope that doesn’t happen again. As she is sipping her coffee and enjoying the smell of the ocean coming through the open windows, she remembers her massage from the same city, where the masseuse tried to feel her up in the name of a massage. That massage ended very quickly, but she couldn’t stop to think how maybe this is how the Chinese are. She wondered why the masseuse was not a women. Then, maybe she thought the women were busy giving “happy endings” to the men, she chuckles to herself “China”. She brings herself back to the resort cafeteria and thinks, ” well no one will notice me here.” She tends to down play her looks. Her beautiful almond shaped eyes, her lashes, her silky brown skin, bold pink lips,and long kinky curly hair that she usually pulls back. She is not aware of her attraction or beauty. As she sits, she thinks why does being black play into a traveler? Or, how people see her? She realized she is always called African or people think she is from South Africa. This bothered her, why couldn’t she be a Black American? Why was that not what came to thought first? She knew there was something to this thought and would revisit it for it says a lot about how people see her in the world or Black Americans. Something about it she thought was strange. As she looks up from her table a women smiles, she smiles back. She starts to get a warm feeling, she thinks all she has right now to comfort her is her writing. She was about to break down in tears. Then, she thought no this is why she is writing, because, she is feeling things – sad, happy, lonely, alive, adventurous, and beautiful. The emotions overwhelm her she thinks back to the United States and she realizes all the things she left behind and the new things she will begin. She brings her mind back to current and present. She misses home and misses the familiar.

The Smell of Childhood Memories

Sitting by the pool, laying on the lounge chair, there was a familiar smell of mill dew from the cushion. Oddly, it reminded her of how she grew up, the smell resembled the orange life preservers she wore every summer on her family boat. She saw the water glistening in the sunlight and flashed to the day she was on the boat and she caught a “Sea Robin”. What is it called? She asked her brother. He said, “It’s a Sea Robin” throw it back in her father says. She said, “why? ” He let her know that they are poisonous and can’t be eaten. At that point, her brother took it off the hook and threw it back in. Wearing her little orange life preserver on her thin brown frame, she was so excited to have caught something, since it was a struggle for her to bring the fish in the boat. They pulled the anchor and continued up the channel. Her brother informed everyone they were heading to the beach. She thought this was her favorite part of the trip, but it was already a great day! Her brother shouts, “Dad can I drive the boat?” She remembers the wind, the fast speed of the boat, and the smell of the mill dew on her life preserver. She isn’t a little girl anymore, she gets up from the lounge chair and dives in the pool. She thinks to herself China is a long way from the Atlantic Ocean.

About the Author:  My name Robin Glassberg I am from the United States currently I live in China. I am an educator and have been teaching and writing for over ten years.