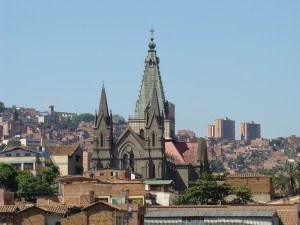 “A woman was shot dead in this bar a few years ago” says my host brightly, passing me a plate of empanadas and a beer, “She was sitting right where you are now actually”.

I resist the urge to leap out of my seat and head for the nearest airport. Medelllin, Colombia (pronounced Med-e-jin ) is, after all, a very different place now than it was 10 years ago when the city was still reeling from the dark reign of drug lord Pablo Escobar and the Medellin Cartel and murder rates ran at over 2000 per year. Modern Medellin is a city of hope, throwing itself headlong into the future and challenging the rest of South America to keep up. Medellín is now Colombia’s second largest industrial center, and home to factories making everything from designer clothing to trucks. It also has a blossoming tourist industry with thousands of visitors discovering it’s unique charm each year. Whilst many countries still issue general warnings about travelling in Colombia, Medellin is now considered one of the safer destinations-a vast leap forward from two decades ago when it had the dubious honour of being named “The most dangerous city in the world.”

The joyful and exuberant spirit of the city is symbolised by the “chiva” or party bus (less a bus, perhaps, than a wagon) which tours the city each night with disco lights flashing, music blaring and impossibly gorgeous people dancing energetically whilst trying at the same time to avoid banging their heads on the low ceiling. It is perhaps due to my more advanced years that I feel they are better experienced from the outside than the inside.

There is beauty in spadefuls in Medellin and the surrounding area, as seen from the air as you come into land in Jose Maria Cordova Airport. Medellin itself nestles in Arruba valley, surrounded by the majestic Andres Mountains and is just a short drive from such gems as Guatalape, Rio Claro nature reserve and the coffee region of Antioquia. Inside the city limits, Medellin boasts world famous gardens, as well museums, a cathedral, theatres and many well-respected universities.As a visiting teacher on a cultural exchange programme, I am treated to a tour of all that the city is proud of, from the Museo de Antioquia to the Plaza Botero, and it is as much the pride and hopefulness of my hosts that touches me as the sights I am shown.

Yes, there are shanty towns (favelas), but Medellin strives to embrace and develop them rather than hide them away. Sergio Fajardo Valderrama-Mayor of Medellin from 2003-2007- worked tirelessly for social integration in the city and an impressive cable car system (the Metrocable) connects the favelas to the centre of the city, allowing affordable access to jobs, education and healthcare Even in poorest areas there is a sense of ingenuity with locals selling everything from garden earth to guinea pigs to make a living and a unique outdoors escalator used as a transport system up and down the mountain in the San Javier area, to the west of the city.

Time is used to control resources effectively in Medellin. Public schools are taught in shifts with a separate morning shift and an afternoon shift to allow access to education for all (“There would be a third shift if the kids could stay awake that long” the principal of one school tells me, darkly). Driving in the city is restricted to certain hours for certain number-plates to prevent congestion. You get the impression that a great deal of thought and planning has gone into modern Medellin and it comes as no surprise to learn that in 2013 it was awarded the title of Innovative City of the Year by The Wall Street Journal, outranking rivals New York and Tel Aviv

There is no doubt that Medellin has reinvented itself, shrugging off its notoriously violent past whilst still managing to retain its strong cultural identity. The residents of the city, or “paisas,” are proud of this transformation; as my host says “There are so many bad memories but now we are working hard to change people’s perceptions of Medellin.” Whilst still not entirely drug or crime free (what major city is?), Medellin is certainly on the right track. It is known locally as “The City of Everlasting Spring” and one gets the sense that this is as much a reference to Medellin’s positive philosophy as to its temperate climate. In many ways, Medellin embodies the modern fairytale, with the evil of decades being destroyed and peace and calm being restored to the kingdom. Sitting in a bar, sharing a typical local meal with my smiling host whilst Medellin life carries on all around us, I am glad to be part of its “happy ever after.”

About the Author: Fran Conley