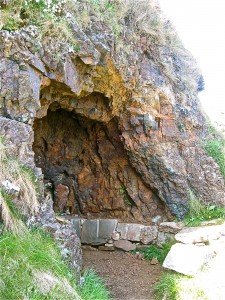 Sitting in The Harp in Sligo, my husband and I consult a map. We want to go to the farthest-north point on the Irish Atlantic coast: Malin Head. “Next stop, Greenland,” says an old gentleman who overhears our choice. We down our pints and head for the car. Arriving in Malin Head, we book into the Sea View Tavern and are greeted personally by Michael, the owner. This place has been in his family a long time and has three bedrooms upstairs above the pub. The three large windows in our spotless room face onto the North Atlantic, with a view to the lighthouse on Inishtrahull. Michael has a large wind turbine on the property; it stands in the same field where the sheep graze.

Malin Head has that end-of-the-earth feeling. Our first day here, we drive the short distance to Banba’s Crown, high point of the headland, where we see WWII bunkers and also the remains of an ugly high concrete tower built by the Brits. Climbing the north-facing rocks, we watch the North Atlantic chopping at the shore with white-edged knife blades. On the grass far below, remains of chalk spell ‘EIRE’, marks left by a neutral people in that time of bombs. On this wind strewn cliff still stands a concrete spotter’s hut. On the soot-blackened walls, traces remain of those who watched, huddled by night around a feeble fire.

Coming back down, we have a pint in Farren’s, the hangout of the locals. A story comes on TV (even the most ancient-looking Irish pubs have modern flat screen TVs) about Donald Trump building the world’s largest golf course in Scotland. Some adjacent property owners object, calling Trump “arrogant and ignorant.” This starts quite the debate in Farren’s. The barman says the new golf course will bring in jobs and raise property values.

A rumpled old character who reminds me of Eamon in Ballykissangel says, “Not in my back yard; them bicyclists will bother my sheep.”

A white-haired gentleman previously quiet chimes in. “Ye shouldna have your sheep in the public road!”

The barman says to the patrons at large, “He just doesn’t like people.”

Says Eamon, “I like my own company very much.” We try to keep straight faces.

Next day, we walk to the Wee House of Malin, a natural cave in the stony hillside. It is said a holy hermit lived here for many years; even today people make pilgrimages here in August. Visitors have stuffed hundreds of coins into cracks in the rock walls. Outside the cave stands a glassed-in Blessed Virgin statue, originally in the school on Inishtrahull, but moved to Malin Head when the island was abandoned. She looks out to sea, and there are offerings at her feet: candles, flowers, seashells.

In the afternoon, we drive a few kilometers to the Five Fingers Strand, a Blue Flag beach. I sketch the far shore with the dark hills rising. The five fingers are reddish rock clumps projecting below the far right bluff. Returning from Five Fingers, we see a sign outside the Crossroads Inn advertising a table quiz that evening, to raise funds for the Sea Rovers Football Club. The pub is walking distance from our lodgings at the Seaview; we cannot resist.

There are lots of questions on Irish sports, Irish TV shows, Irish politicians. They play ten rounds of ten questions each. At the question “name the Great Lakes in North America,” the team at the next table looks over at us quickly writing the answer and asks, “Want some sweets?” They are a terrific bunch, the young footballers and their girlfriends. We win a bottle of wine for the Proverbs Round, in which a bunch of first letters are listed and we figure out the saying. Example: AAADKTDA = an apple a day keeps the doctor away. The prize for best team name: the group next to us, who are also the funniest, and come in first overall. They call themselves E = MC Hammer.

Sign on the back bar at Crossroads Inn: “Please do not ask for credit, as refusal so often offends.”
Writing-wise, this location is nourishing. I have seven new poems written, and yesterday decided on the working title for the book that will come from this trip. Michael is enthusiastic about offering copies of my future book for sale here. After four days at Malin Head, we are in love with the place, but our room has been booked by members of a large walking group, and the rest of Ireland beckons.

About the Author: Sheryl Clough is a poet, photographer and editor living on Whidbey Island in Washington State. Her book “Ring of Fire, Sea of Stone” won the 2013 San Gabriel Valley Literary Festival Chapbook Prize.

Tripe Soup from Turkey
What Do Van Morrison, the Godfather of Punk and Seamus Heaney Have in Common?
Better Late Than Never to Finnish
A Perfect Place to Mourn in Spain