One of the greatest things about traveling without a set plan is that you get to do what you want. George and I traveled several years ago thinking we had few plans but looking back we many more than we do now. George loves to play his guitalele and I love to read. I think without books and music we would be lost.

My friend, Melissa, recommended several superb books to me and I’d like to share one with you. I found What Alice Forgot by Liane Moriarty  fascinating. The idea that Alice, the main character, hit her head and suddenly believed she had been thrust ten years into the past gave her new perspective on her life. She became was challenged to think about her choices;  she was completely befuddled by where she now found herself.

Alice’s sister says: “How would I feel if I lost ten years of my memory, and what things would surprise me, or please me, or upset me about how my life had turned out.”  Meanwhile, preparing for this one-year journey I have really wanted to have a chat with the “me” of four years ago. I was so nervous to quit my job in 2008 and leave for a year of adventure with with George. I could not imagine how it would all work—finding a tenant for our condo, a home for his cat, quitting my job!! I just felt so overwhelmed. I was really not the “no plans” traveler or person. George helped me through the self-induced drama but looking back and having left long-term for the second time, we now knew enough to have rented our place four times. I can say that for me some tasks really do get easier with practice. Our relationship is more solid, my ability to be flexible is better, and I like my choices. I think my “self” in ten years will not have as much to say to me now as I do to my “self” of ten years earlier. But you never know! 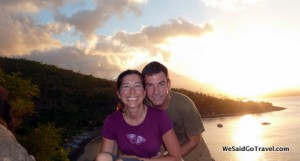 I would call my 2008 self and say RELAX-it all works out. George loves you. The trip is good. Yes, you cry and yes, there are times when there is nowhere to sleep but you live. And really, who cares? So you sleep on a table at a bar one night and in a taxi on the way to Borobodur, yet nearly every night you have a bed and sometimes even running water with electricity! As they said in the film, The Best Exotic Marigold Hotel, “It will be all right in the end, and if it is not alright, it is not the end.” That would have been a good theme for our last trip. For this one, Everything is all right could be the current theme. I just want to be with George and hope to read more books that makes me think!

I really enjoyed What Alice Forgot. I hope that if you imagine a conversation with your past or future self, you feel good about your choices and your life path. Taking the chance to leave on this journey has always felt like the right choice. In 2008, I was unsure and nervous about what would happen on the trip and in my relationship with George. Now in 2012, I have no idea what will happen next and I cannot wait to find out!

What Liane has to say about her book:

Armenia: Sandcastle Girls
One Tweet Can Make a Difference: #ShareHumanity
Survive the Unexpected: Supersurvivors
Listen to LISA on Girls on the Air Radio Show

One response to “LOSING Ten Years”