Lisa is Writing for Wharton! 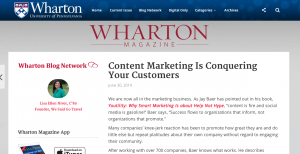 Thank you to Wharton Magazine for publishing my article on Content Marketing! I am honored to be included in your site! Hooray Hooray Pennsylvania!

We are now all in the marketing business. As Jay Baer has pointed out in his book, Youtility: Why Smart Marketing Is about Help Not Hype, “content is fire and social media is gasoline!” Baer says, “Success flows to organizations that inform, not organizations that promote.”

Many companies’ knee-jerk reaction has been to promote how great they are and do little else but repeat platitudes about their own company without regard to engaging their community.

After working with over 700 companies, Baer knows what works. He describes “friend-of-mine awareness” as one strategy that makes a company stand out.

“If you are useful without engaging in an immediate quid pro quo, your business will be trusted the same way consumers trust their friends and family members,” Baer writes. The new magic is to “focus on solving problems, answering questions and creating long-lasting customer relationships by doing so.” Companies that figure this out will be rewarded with all types of success.

Friend-of-mine awareness is based on the reality that companies “are competing against real people for the attention of other real people.” When consumers trust a company as they would a person, the reward is that customers and prospects then will do more of its marketing for the company.

I was astounded by an example in Youtility about the Twitter feed @HiltonSuggests. I started following it and Vanessa Sain-Dieguez, director of social media planning and integration for Hilton Worldwide, on Twitter. Hilton has taken the idea of being a friend to a whole new level by sharing local knowledge with anyone in a city where the hospitality company has a local team member online.

My first thought was to share this with a family about to go to Prague, one of the 25 pilot cities for the program. I love San-Dieguez’s quote in the book about how some of the experts are not from concierge or social media but “they’re just hotel employees who love their city and want to help visitors better enjoy it.”

“We’re not looking to win your stay on this trip. We’re looking to make a real, authentic connection with you and hopefully gain a customer for life,” says Sain-Dieguez.

I love that they are building friend-of-mine awareness and understand that the new ROI (return on investment) is a return on involvement.

Is your company ready for youtility? Many companies are not. Offering assistance without expecting immediate return “is in direct opposition to the principles of marketing and business deeply ingrained in practitioners at all levels,” writes Baer.

This was a major issue with several hotels when I organized a speaking tour called the “Festival of the Pacific.” Many hotels have asked me about how they can grow their followings and show up better in searches, yet most of them are not ready to shift to the new ROI (involvement). I was surprised when one major chain declined to host a speaking event but did host me for two nights in a suite with ocean views in Oahu. Hotels customarily host writers—but not events. The hotel that chose to host the event had over 40 people show up who loved the hotel, the restaurant and the event, and the hotel was able to introduce these guests to its latest Thursday night happy hour promotion. I got to stay in the penthouse as well (where the Black Eyed Peas stayed when in town for a concert!).

The social media buzz on the event was such that the general manager asked when I could fly back and give another talk.

I wrote an article for the first hotel, but it failed to generate the interest produced by the talk and the subsequent video. When you resort to traditional promotion and stay away from providing information, that bond of trust with consumers “evaporates,” as Baer puts it.

Another example from Baer’s book is Holiday World and Splashin’ Safari, which offer their guests free parking, refreshments and sunscreen. “[It] is creating more waves as that is the conscientious treatment your friend would give you at their house,” Baer writes. People want to feel like they belong in your community. They want to feel like they matter and that a company is treating them as relevant.

Customers and prospects are responding to the youtility trend. As Baer explains, 60 percent of consumer decisions are made before a company even has a consumer on its radar.

“Customers are ninjas now. They are stealthily evaluating you right under your nose,” Baer writes.

So, what are you doing to make a difference for your tribe?