Such Is Life in Australia 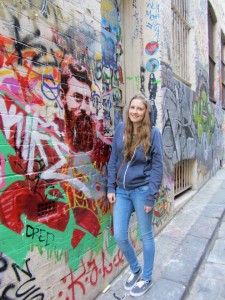 Undoubtedly one of the most memorable moments of my five week trip to Australia last summer was in Melbourne where on a free walking tour we heard about Ned Kelly- one of the most famous figures in Australian history and a national hero. He is best described as the ‘Australian Robin Hood,’ who caused much controversy by his stand against the corruption surrounding the police force and British colonialists of the time. To some he is nothing but a lawless thug, but to many he stood for the Australian everyman, he symbolised honour and took a stand against injustice in the establishment. When hearing his story while standing in the Old Melbourne Gaol where after his capture he was eventually hung for his crimes, I didn’t realize the significance of one singular man on a country until I was walking around the city later that day.

Melbourne is most recognized internationally for its rich culture and art scene. Street art is held closely to the heart of the city, most perfectly expressed on Hosier Lane, where down the whole lane every wall and building is covered with graffiti. Each piece individually different, with hidden meanings and political messages, but looking at the top of the street looking down all you see is a blur of colour that is so modern yet so beautiful. Though the artworks were so unique and constantly changing due to new graffiti artists spraying their ideas over the space, one face was particularly prominent. A stencil of Ned Kelly’s face was spray painted multiple times down Hosier Lane and throughout the rest of the city. Over a hundred years on, a poor Irish bushranger is still remembered.

Though Melbourne was the first stop of our five-week trip backpacking up the East Coast of Australia, the story of Ned Kelly followed us up as he encapsulated the feeling of the country. Laidback, decent and an altogether ‘good bloke’ Ned Kelly was the everyday Australian man. His humour defined the country, as a heavily sarcastic, dark banter filled every Australian city and town we visited. The stereotype of an Aussie man is a bronzed surfer with a beer permanently in his hand coming out with phrases such as ‘G’day’ and forever putting ‘shrimps on the barbie.’ On arriving, I obviously did not encounter this, however I was met with laid-back, hilarious and definitely tanned individuals whose positively and love of life was inspiring.

Famously, when Kelly was asked before his execution if he would like to say any final words, he responded, “Such is life.” It wasn’t long before this became the mantra of our trip, with the three words defining a country that is impossible not to fall in love with.

About the Author: AS: I am currently a student of American Studies living in Brighton with a passion for travel. I spent my last summer in Australia and this August I will be moving to Michigan, USA to study for a year.

Las Pozas, Mexico And The Eternal Now
India: A Moment In Time
Empty inside in Victoria Falls, Zimbabwe
Four Days to Sculpt a Masterpiece in South Africa

2 responses to “Such Is Life in Australia”