A letter from the Freedom Island – Havana, Cuba 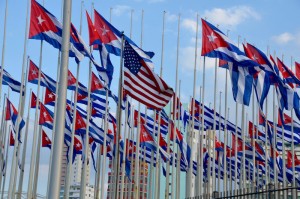 I’m riding “shotgun” in a 1928 Ford Cabriolet along a nearly empty six-lane promenade. A sunny Sunday afternoon was tailor-made for cruising in a classic convertible along the Atlantic coast. If this beautiful road were located in Miami, or any other world-class seaside city, it would have been clogged by expensive cars filled with cool people.

But this street is called Malecón in Havana and it is deserted because most Cubans do not own cars and don’t drive. Instead of the multimillion dollar condominiums and 5-star hotels, Malecón is lined with dilapidated apartment buildings. Their balconies hang by a thread from the broken walls and their inhabitants resemble squatters of condemned properties. A real effort is needed to imagine this area as a prime real estate location, as it rightfully deserves.

Visiting Cuba at this stage of its history means asking a lot of questions and not getting many satisfying answers. This happens not only because the answers are given with a knowing look over one’s shoulder – Who else might be listening? – but also because there isn’t any clarity about where the country is now and where it is heading. My friends and I have come to Cuba in December of 2015 because we want to see this country in its pre-globalized state, just a few years before it becomes yet another Caribbean resort destination.

The change is definitely in the air. As the long Malecón finally deposits our classic cars into the Old Town, I see a large MSC cruise ship docked in the half-abandoned port. A few thousand ship passengers have already flooded Habana Vieja and are doing what they do best, i.e. consuming. They buy the Che Guevara t-shirts, revolutionary posters, old banknotes, contemporary paintings, rum, cigars, and so on. It is easy for a foreigner to drop $20 – $30 on a meal, drinks and tips, which is equivalent to a local monthly salary.

I see tourists snapping photographs everywhere – the Old Town is a real gem with beautiful squares and former palaces, pretty people, charming streets, stately hotels, stern cathedrals, neighborhood bars, art galleries and street performers. If I ignore the subtropical vegetation I could easily imagine myself walking through a European capital. Now I know why Ernest Hemingway had loved living in Cuba and why “El Papa” was fatally depressed to leave the island in July of 1960.

The newly restored part of Habana Vieja covers a fairly small area. I keep on strolling and soon enter a neighborhood that has not seen any paint since the Revolution. There is a dead cat lying on the street and old Soviet Lada and Moskvich cars misfire thick clouds of black exhaust. A dozen men and women are lined up along the wall and patiently wait for their turn to get something from a small dark window. All of them look at me with curiosity – a foreign visitor doesn’t appear here too often. 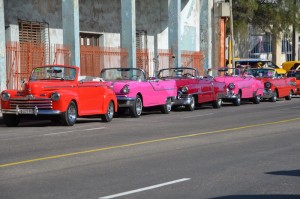 Why was this magical city ignored and allowed to disintegrate? The official answer is that the country’s wealth was taken out by the emigres, while the US trade embargo keeps on blocking the new money from reaching Cuba. I don’t buy this – the economic blockade has never been airtight: the USSR had pumped lots of resources into the “Freedom Island” between 1961 – 1991 and most countries (including EU, Japan, China, India, etc.) did not support the US embargo.

It seems that everything in Cuba is “carbon dated” by the Revolution. Most of the country’s buildings and infrastructure were constructed Before the Revolution, while some sad Soviet-style apartment blocks and monuments belong to the After the Revolution category.

As an ex-Soviet, I easily find the remnants of the “evil empire” all over the island: police road checkpoints, official pins and medals on sale in a local park, semi-empty supermarket shelves, posters with the faces of Heroes of Cuba, crumbling apartment blocks, underground music, indifferent sales clerks, a few boring channels on TV, and so on. 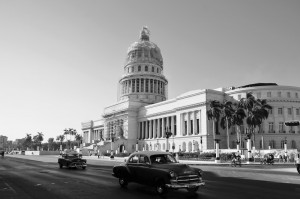 Will this maddening stagnation ever end? I believe so. Just as it happened in the USSR in 1991, the Cuban people may wake up one morning and discover that the totalitarian rule is gone and the mighty “market economy” is now in charge of their country. Alternatively, the Communists could adapt the Chinese pragmatic model of a hybrid society, as described by the late Deng Xiaoping: “It doesn’t matter whether a cat is white or black, as long as it catches mice.” In other words, the Communists may still retain the political control, while some form of the market economy will be encouraged to thrive. Regardless, it will not be an easy transition and there will be disappointments and arguments whether the new way of life is better than the old one. Most of the pensioners and revolutionary veterans will be angry with the changes, while the young generation will embrace the new reality.

I wish the Cuban people best of luck, success and patience in their journey. Viva Cuba!

I've explored 100+ countries and I don't believe in a "trip of a lifetime". Instead, I want everyone to enjoy a life full of many great trips!

One response to “A letter from the Freedom Island – Havana, Cuba”