Kenya to India: Memories and an Old Friend from the S.S. Karanja

We asked our friend Kit, whom we met in the Cook Islands, if he wanted to write something for our blog.  He took a sudden detour through the past to bring us his account of crossing the Indian Ocean at Christmas time, 1975.

Kenya to India: Memories and an Old Friend from the S.S. Karanja by Kit Herring

You never know what you’ll find these days when you turn on the computer.  Recently my email showed a comment from a reader of my blog, The Backpacker’s Handbook.  The writer, a guy named Steve who was originally from the UK but who now resided in New Zealand, indicated that he was  on the Christmas 1975 trip of the Karanja from Mombasa to Bombay and he was wondering if I had been present during the same voyage.

1) The Karanja in 1948, pride of the British India Line (image courtesy of The Ocean Liner Virtual Museum, UK)
I had posted a scan of a document that passengers who booked third class were obliged to sign – although I never did – relieving the ship owners from responsibility pertaining to the mixing of races below decks. The document was a real piece of work and had survived in my possession all these years.  Along with the paperwork I mentioned that I had traveled on the vessel. Steve had found my post somehow and was motivated to write back.
That memorable trip on the Karanja, across the Indian Ocean from Africa to South Asia, had also included a four day stop-over in Karachi.  Steve remembered not only me but my friend Tony, along with a long list of travelers on the trip.  Amazing.
The Karanja had started the passage a few days before Christmas, sailing from the port of Mombasa.  As I recall, she didn’t sail very often and so I had waited out the time for the trip in a remote ocean-front cottage some miles north of the city. 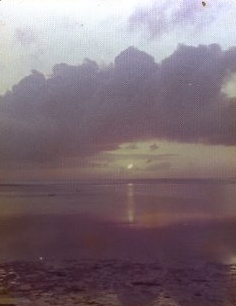 2) View of the Indian Ocean from the house in the bush.  A plethora of interesting critters called the tidal flats in front of the beach home. Many of them were venomous
The voyage itself was festive enough and included a wild Christmas Eve dance in first class.  Luckily for us travelers the South African ship’s officers were not inclined to enforce the rules regarding the mingling of races, as long as said mingling was conducted only by whites.  And I still remember the bar in the restaurant. We were able to buy all the duty-free booze we coveted, and the shop was run by a pleasant Indian fellow, whom Steve reminded me was often quite soused himself.
I also recall the lifeboat drill just after we left Mombasa.  The whites scurried to the proper stations with haste, while all the Asians remained on their bunks, wondering what the fuss was about.  It was a great introduction to Indian fatalism.
At night we used to go up on deck and listen to the Asians onboard making music under the stars with their homemade instruments, a lovely and spiritual experience.
In Karachi we spent the days wandering the city streets, our first glimpse of the complexities of the sub-continent. Everyone in the city seemed to be extremely friendly and I quickly became entranced.
The only negative vibes I witnessed during the ten or twelve days it took to cross the sea occurred while in Karachi, in fact.  Another South African, this one a passenger, couldn’t handle all the “wogs” he saw dockside.  He actually took a bucket of soapy water he found somewhere and heaved it over the side of the ship, in full view of myself and a number of other people, dousing the Pakistani longshoremen below.  An unrepentant racist, he was quickly manhandled by officers onboard and taken to the brig.  I never saw him again.  His vitriol had been non-stop and we were glad to be rid of him.
Finally the ship docked in Bombay and we parted ways from our Indian fellow passengers and from the other travelers. I did run into Steve one time in Delhi, he tells me, but frankly, my recollection of the meeting has been lost to history.
It’s nice to know that the Internet has made the world smaller.  How easily forgotten are the travels and travails of our youth. 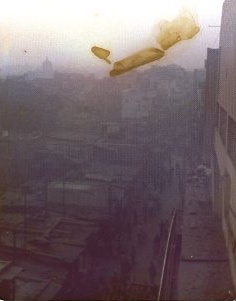 3) The Para Ganj from my Delhi hotel room, coffee stains and all

We hope you enjoyed this post by Kit. More from him at:  The Backpacker’s Handbook.

More from us: next week! We have some exciting news to share with you in the coming weeks!!
Check back for updates from Lisa and George.

We hope you will join us March 24, 7pm for a Travel Talk: Uncovering Jewish Morocco. There will be photos, music, information and food.

33 responses to “Kenya to India: Memories and an Old Friend from the S.S. Karanja”