Johnny Jet: Palawan, Philippines from Above and Below 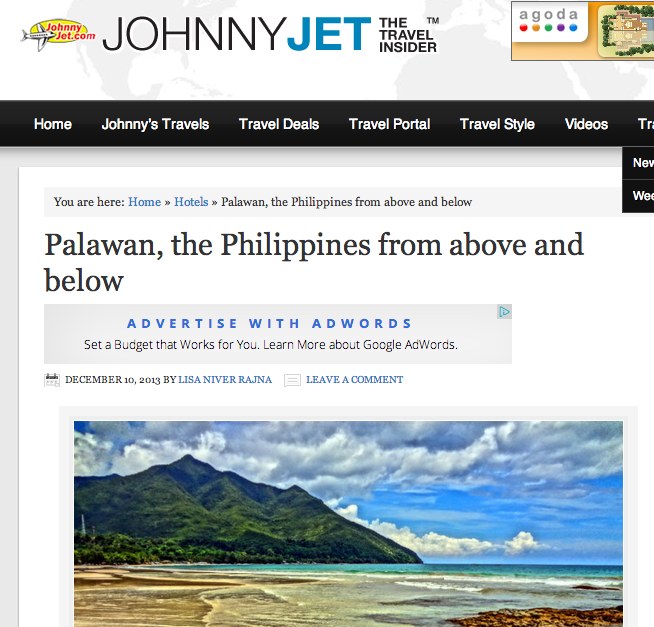 Thank you to Johnny Jet for sharing our story from Palawan in the Philippines.

Having heard that Palawan in the Philippines is a worthwhile destination from a variety of travelers over the years, I was excited to be heading to the island’s capital, Puerto Princesa. Rissa Gatdula-Lumontad and Ricky Tio at Cebu Holiday Tours set up our accommodation and itinerary in advance, and so we were picked up at the airport by a representative from Hotel Centro, a misnomer since the hotel is located a few kilometers outside of the city center in a quiet area near Robinsons Place Palawan mall.

Constructed only two years ago in 2011, Hotel Centro has a variety of rooms to choose from including deluxe, superior, as well as honeymoon and family suites. The hotel puts on grill nights near the pool and has implemented an eco-friendly stance with programs to help the environment, such as their towel initiative; Hotel Centro was in fact awarded the 2011 Puerto Princesa City’s Cleanest and Greenest hotel award and is the 2012 Agoda.com Gold Circle Award.

The “Soul Pool Bar” offers Happy Hour discounts each night (60-peso local beers from 5 pm-8 pm; 50%-off margaritas and mojitos from 8 pm-11 pm) to help guests kick off evenings while relaxing at the bar adjacent to the pool and outdoor Jacuzzi. Hotel Centro’s amenities include a souvenir shop, fitness center, spa, business center and five conference venues. Fine dining is available for clients at Expressions Café but we had a romantic date night at Badjao Seafront, a highly recommended oceanside seafood restaurant where we sampled shrimp salad, crab soup and a tuna filet served with a side of vegetables and rice.

After a comfortable night’s sleep, we departed to the underground river at Puerto-Princesa Subterranean River National Park, a UNESCO World Heritage Site and perhaps Palawan’s biggest tourist draw alongside El Nido. The underground river is also cited as number two of the New 7 Wonders of Nature. Formed by limestone karst formations, the underground river is open from 8:30 am-3:30 pm and issues 900 daily permits (which must be secured ahead of time; tour groups like AMIKA Tours can make the arrangements). We were picked up by April, a representative of AMIKA Tours, and en route we passed by Puerto Princesa’s largest mountain, Mt. Cleopatra. In keeping with Palawan’s theme of cleanliness and green eco-tourist stance, solar streetlights and trash free streets were evident.