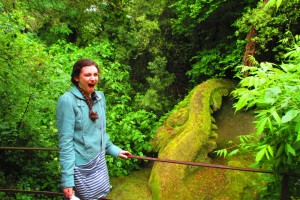 I hate cats. In fact, cats and I have a mutual hatred for each other that works out well. I pretend I don’t see cats, they pretend they don’t see me. In a twisted way, we’re sort of perfect for each other. But despite our differences, for some reason, when I went to Rome, Italy,  I was immediately drawn to what appeared to be one of the strangest attractions I have ever seen: feral cats.

There is literally an area in Rome in which the cats seemed to have taken over an ancient Roman temple. Rather than kicking the kitties out of the precious ruins, somebody decided to block the area off and open it up as a tourist attraction: the Cats of Rome. It is even complete with a downstairs viewing area and a gift shop. Suppose you find a cat that you particularly fancy; well, you can go ahead and purchase that cat as a fluffy souvenir.

While the display of feral cats as a tourist attraction certainly baffled me, there were other things about Italy that had puzzled me even more. For one, they eat dessert for breakfast. While I certainly did not disagree with this, the first morning in Amelia when my host mother set out a piece of last night’s cake before me and smiled encouragingly I thought that maybe she was allowing me to indulge a little as a sort of vacation treat. However, the next morning when it was two pieces of last night’s tart, and then the following morning I was given some cookies smothered in jam, I began to understand that it was just the custom in Italy. They eat dessert for breakfast. It was as if I had arrived in a beautifully twisted paradise. Why shouldn’t we indulge first thing in the morning? 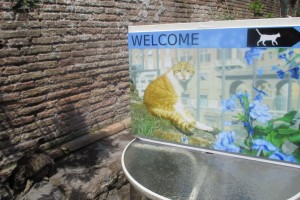 And as if that wasn’t twisted enough, the Italian concept of time was a completely separate language that I still don’t quite understand. Not only do most stores take two-hour breaks during lunchtime and then return to work at their leisure, but each day at the Italian language school I attended we would take a fifteen minute coffee break twice a day that would somehow find a way to stretch into an hour-long relaxing outing at a local coffee bar.

When we were scheduled to start class at nine, it almost always meant we would begin at 9:15. If we were supposed to attend a dinner at eight, it meant that we would leave for dinner at eight and we would most likely be eating at nine. Not to mention, that any meal at a restaurant was a two-hour affair no matter how much or how little food you ordered. 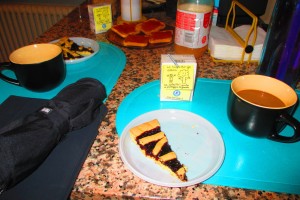 Italy seemed to have its own guidelines. Somehow it was naturally independent of the basic rules and structures that held back other countries. Like the feral cats that took over the ancient ruins, Italy did what it wanted with an alluring flair. For one, the drinking age doesn’t exist. Anyone and everyone is welcome to share in the joy of a nice glass of wine or a strong blast of limoncello. And those pesky stop signs? Completely optional. As long as the road is clear, you can most certainly blast right through them. Your dogs don’t need leashes in Italy, either, and they can poop right on the sidewalk. No one needs to pick it up. If you don’t consume at least three courses of carb-loaded food at dinner and dessert, you’re doing something wrong. But, amongst all of these Italian lessons in life, I learned that feral cats are creatures to be admired and displayed, that time is not something that can imprison us and most importantly, that dessert is for breakfast.

As I stood that day admiring the odd, but amusing display of the Gati di Roma, a couple words from a graffiti artist caught my eye. “Big Kid Fun.” The phrase seemed to stick in my head with the same invigorating enthusiasm I had felt ever since I began breaking all the rules in Italy. It was not adult fun, it was big kid fun. Italy brought out the essence of childhood in me and the freedom to give in to the fun big kid that exists in all of us. It taught me that life is not bound by anything as long as we don’t allow it to be. As I left the wild felines stretching and sleeping in between the columns of the ruins they claimed for their own, I began to think that maybe cats aren’t so bad.

About the Author: Shannon Fitzgerald is a rising senior at Allegheny College pursuing a career in the literary field. She is from a small, snowy town south of Buffalo and just a short drive away from Niagara Falls. Traveling has been an important part of her life since her parents first took her on a trip to Disney World at the age of four.