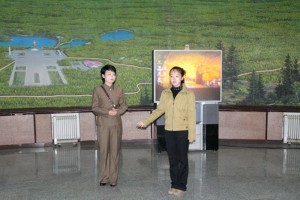 The next day is triumphal, the morning enormous as the sky. We visit the Revolutionary Regional Museum, fronted by ectype Siberian tigers, which still roam these mountains, and are traditional symbols of a unified Korea. Inside, the displays celebrate the North Korean victories over Japan and America, including a video of such shown on Toshiba monitor using Windows XP.

Then off to the Samjiyon Grand Monument, featuring a giant bronze statue of a young, stiff-backed Kim Il-sung in military regimentals, flanked by squads of oversized soldiers, back-dropped by Samji Lake, dotted like snowflakes with egrets. Revolutionary music plays from discreetly placed speakers. I am urged to buy a bouquet of flowers to lay at the base, and then we all line up, sans hats, and make a respectful bow. Photos are allowed, but only of the entire statue from the front, not parts or backsides.

After lunch (the food is always hearty, plentiful, and includes meat of some sort, always kimchi, soup, rice, potatoes and beer, but never dog, which is a summer dish), we make a 40-minute charter flight to the Orang airport, not far from the border with Russia, landing next to a line of MiG-21s. From there we drive three hours to Mount Chilbo, “Seven Treasures,” a national park, and applicant for UNESCO World Heritage status. Along the way we pass tobacco and corn fields, cabbage patches, trips of goats, and lines of oxcarts carrying goods somewhere. We first stop beneath a 200-year-old chestnut tree at the Kaesimsa Buddhist temple (“America bombed the churches and Buddhist temples,” Mr. Lee tells us, “but they missed this one.”). It was built in 826, and serves today as a repository for important Buddhist sculptures, paintings, and scriptures. The monk has us gather in the temple, below images of flying apsaras, where he taps a gourd and chants. He says he prays for our good health and happiness, and that we will contribute to the peace of the world. Then he suggests we contribute to the donation jar. 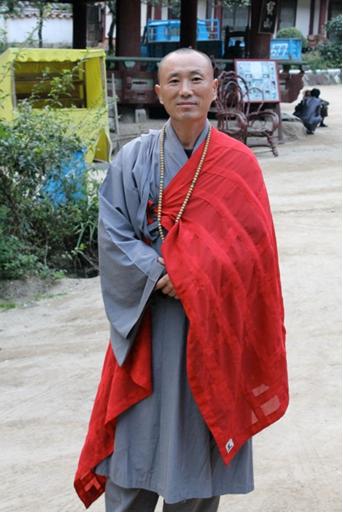 It’s a short hike to Inner Chilbo, an astonishing vista of wind and water sculpted turrets, buttes, mesas, masts, cathedrals and temples, a stunning combination of Yosemite, Bryce and Zion National Parks. Mr. Lee, in a North Face jacket and Prospect running shoes, plucks some pine mushrooms off the path, and shares them with the group, saying these are delicacies in Japan, sometimes selling for $100 a stem.

After a few short hikes, we bus into a box canyon, and check into the closest thing North Korea has to an eco-lodge, the Outer Chilbo Hotel. The accommodations are spartan (plastic buckets filled with washing water outside the doors), but the setting–high cliffs on three sides, wooded grounds, a clear singing creek– is something apropos to an Aman Resort, and may yet someday be.

The day next, as the light struggles into the canyons, we hike to the Sungson Pavilion, a high platform that affords 360 degree views of Outer Chilbo, grand vistas of the serrated mountains and sheer cliffs that encase the park. We can see our eco-lodge from here, which has a miniature appearance, like something carved by hand and set down out of scale at the base of the mountains. The vantage collapses perspective, creating an illusion of both proximity and depth, as though the hospiltality below could be reached in a moment, or not at all.

And then we unwind the highlands, and trundle to Sea Chilbo, a last sigh of igneous rock that decants into the East Sea of Korea (Sea of Japan on most Western maps). The coastal village through which we pass is dripping with squid, hanging like ornaments form rooftops, clothes lines, and every exposed surface of houses that look as though they grew out of the ground. The permeating parfum is eau de cephalopod. Past the electronic fences (to keen potential invaders out), on a wide beach, a long white table cloth is spread, and we settle down to a picnic feast of fresh calamari, crab, yellow corvina, anchovies, seaweed, and beer, just before a bruise of clouds fills the space between earth and sky, and the rain sets in. 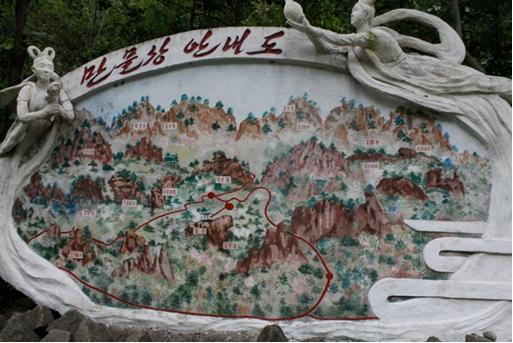 The dirt road to Chongjin is lined with magnolias (in the north of North Korea we experience almost no pavement), and a richness of no billboards or advertising of any sort. We pass hundreds of soldiers, part of a million man army, in olive drab striding the highway; tractors that look like Mater from the Cars movies; and smoke-billowing trucks, which have furnaces on the flatbeds where wood is fed for fuel. At dusk the countryside becomes subdued; shadows soften the hillsides, and there is a blending of lines and folds. It’s dark as we wheel into the steel and shipbuilding town, generously lit with streaks of neon (Hong Kong without the brands). We stop at the Fisherman’s Club, which is playing a video of launching rockets and enthusiastically clapping crowds as we order up Lithuanian vodka and something called “Eternal Youth Liquor,” which has a viper curled up inside the bottle, like a monster tequila worm.

We stagger into the Chongjin Hotel, past a pair of Kenwood speakers playing a stringed version of “Age of Aquarius,” stumble up the stairs beneath a poster of “The Immortal Flower, Kimjongilia,” a hybrid red begonia designed to bloom every year on Kim Jong-il’s birthday, and into rooms where the bathtubs are considerately pre-filled with water to use to flush the non-flushing Toto toilets.

Motivational marshal music cracks the day. We can’t leave the hotel compound (some power-walk the driveway for exercise, looking like guests at the Hanoi Hilton), but several of us gather at the gate and watch the beginnings of the day. The street is being swept, folks are walking and biking to work in their shiny synthetic suits, children are being hustled to school, and a woman in a balcony across the way is videotaping us as we photograph her.

North Korea’s got talent. The highlight of the day is a visit to a primary school, where a troupe of red lip-sticked, costumed children between ages 4 and 6 sing, dance and play instruments as though maestros. They play guitars, drums, a Casio organ, and a gayageum, the traditional Korean zither-like string instrument, with one outstanding student plucking as though Ravi Shankar. 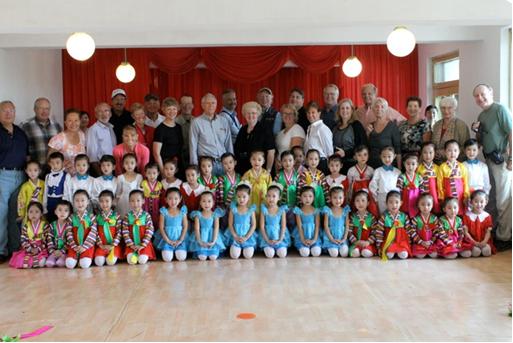 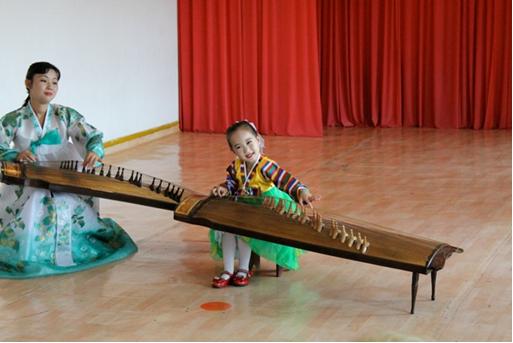 With the long tapers of afternoon light we are back in Pyongyang, and on the way to the hotel pass the first billboard we’ve seen, featuring The Peace Car, a handsome SUV the result of a joint-venture between Pyonghwa Motors of Seoul, a company owned by the late Sun Myung Moon’s Unification Church, and a North Korean government-owned corporation that also works on nuclear procurement. Several of the slick vehicles are lined up in the hotel parking lot, alongside Mercedes, BMWs and the occasional Volga.

In the sweet liquid light of morning, after a breakfast of scrambled eggs, toast, potato chips and instant coffee, noshed to the tune of “Those Were the Days, My Friend,” (it is originally a Russian song, called “Dorogoi dlinnoyu”) we set out to tour Pyongyang, a city that could be called Edifice Rex, for its complex of outsized compensation monuments. We take the lift (five Euros each) up the 560-foot tall Juche Tower, named for Kim Il-sung’s blended philosophy of self-reliance, nationalism, and Marxism-Leninism. We wander the base of a 98-foot-high statue of the holy trinity– a man with a hammer, one with a sickle, and one with a writing brush (a “working intellectual”). We parade through the city’s largest public space, Kim Il-sung Square, akin to Red Square or Tiananmen, featuring giant portraits of President Kim Il-sung, as well as Marx and Lenin. We bow again and place flowers at another giant bronze statue of the Great Leader, president for life even in death. We pay homage to the Tower to Eternal Life, with its stone inscription: “The Great Leader, Comrade Kim Il-sung, Will Always Be With Us.” We admire huge statues in front of the Art Museum of Kim Il-sung and Kim Jong-il blazing some battlefield on horseback, and two weddings taking place near the hooves. And we pass scores of impressive, oversized buildings, from the library to museums to the notorious 105-story, pyramid-shaped Ryugyong Hotel, the dominant skyline feature, unfinished more than 20 years after construction began (it seems, from some angles, to list a bit, like the Tower of Pisa).

The metro, deepest in the world, seems designed to withstand a nuclear attack. If it were much deeper it would come out in the South Atlantic Ocean near Argentina, its antipode. The stations are named after themes and characteristics from the revolution, and we take a five stop run from Glory Station (festooned with chandelier lights that look like celebratory fireworks) to Triumph Station, lined with socialist-realist mosaics and murals. 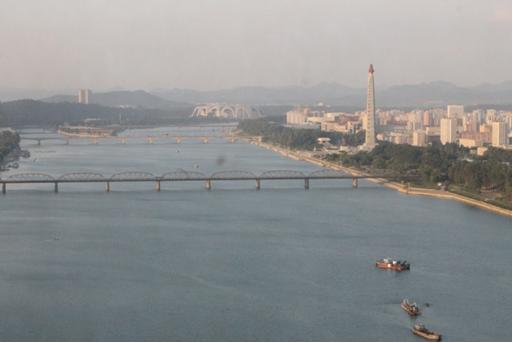 And we finish the day with a step down to the Taedong River and onto the USS Pueblo, or as the North Koreans say without variation, “the armed American spy ship, Pueblo.” It’s a rusty bucket at this point, 43 years after the incident, and the guides, in navy togs, show us the crypto room packed with teletypes and ancient communications gear, the .50-caliber machine gun on the bow, the bullet holes from the North Korean sub chaser, and the spot where a US sailor was hit and died. We watch a short video featuring Lyndon Johnson alternatively threatening and claiming the ship a fishing vessel (not true), and then his apology, which allowed the release of the 82 crew members exactly 11 months after they were captured.

Check out Part 3 of Richard’s North Korean adventure next Monday!