(Note: this piece does not explore or comment upon any political or ideological aspects of North Korea, nor does it pass any judgments or make critiques…there are many books and articles that do that…but rather this is merely an account of travel through a remarkable and little-known land as a guest of the state.)

It’s been almost 60 years since the end of the Korean War, and for most of that time Americans had been prohibited from visiting North Korea by its government. For many years I canvassed any contact I could ferret about securing visitation, but for naught. Until this year.

I rendezvous with 23 friends in Beijing, and the first indication that we are about to fall off the map is when a plastic bag is circulated at the airport before boarding the Air Koryo flight…in it we deposit our cell phones, and any books about our destination, as they are not allowed in the DPRK. We are, however, permitted to bring cameras (with lenses less than 200 mms), laptops, Kindles and iPads, as long as they don’t have activated GPS. Credit cards can’t be used for internet access, or to buy anything. Even with cash, there is no public internet access in-country. We are abandoning ourselves to the journey.

On board the Russian-built Tupolev Tu-204 instead of Muzak we are soothed by the national anthem, the newspaper distributed is the Pyongyang Times (in English), and on the video monitors are dramatic recreations of World War II, as well as a tourist video that evokes Disney documentaries from the 1950s. Immigration and customs are easy, faster than most first-world airports, and they do not stamp our passports, so you just have to take my word that we were there.

We’re greeted by guides Mr. Lee and Miss Lee (no relation), who usher us onto a Chinese made luxury bus called King Long, where we roll down spotless extra-wide streets by willow trees and tall apartment buildings, past heroic posters and photos of Kim Il-sung, the country’s founding leader, and his son Kim Jong-il, who died in December 2011, leaving his third son, 29-year-old Kim Jong-un in charge. We drive through the Arch of Triumph (larger than the Paris version), and into downtown Pyongyang, the capital. Along the way Mr. Lee, shares, in enunciation occasionally untidy, some information…the country has 24 million people; 3 million in the capital. It is 80% covered by mountains. From 1905-1945 it was brutally occupied by the Japanese. The Korean War (known as the Fatherland Liberation War by the DPRK) lasted from 1950-53, and during that time there were 400,000 people in Pyongyang, and the Americans dropped 400,000 bombs on the city.

We cross a bridge to an island in the Taedong River, and pull up to the 47-story Yanggakdo International Hotel, with 1000 rooms, a revolving restaurant on top, a lobby bar with Taedonggang, a very good beer, and room television with five channels of North Korean programming, and one featuring the BBC.

As the day bleeds to night we head to the Rŭngrado May First Stadium, largest in the world by capacity. We park by a Niagara-sized dancing colored fountain to which Steve Wynn could only aspire, walk past a line of Mercedes, BMWs, and Hummers, up the steps to prime seats (where Madeleine Albright once sat) at the Arirang Mass Games. The Games (there is no competition, just spectacle) are a jaw-dropping 90-minute gymnastic extravaganza, with meticulously choreographed dancers, acrobats, trapeze artists, giant puppets, and huge mosaic pictures created by more than 30,000 sharply disciplined school children holding up colored cards, as though in bleachers at the world’s biggest football game. The London Guardian calls the Mass Games “the greatest, strangest, most awe-inspiring political spectacle on earth.” The Guinness Book says there is nothing like it in the universe. One hundred thousand performers in every candy color of the spectrum cavort, whirl, leap and caper in perfectly choreographed unison. A thousand Cirque du Soleils. Ten thousand Busby Berkeleys. It all makes the opening ceremonies of the Beijing Olympics look like the opening of the London Olympics. Finally, we pour from the stadium, past the vendors selling posters, DVDs and memorabilia, exhausted and in overstimulated wonderment. 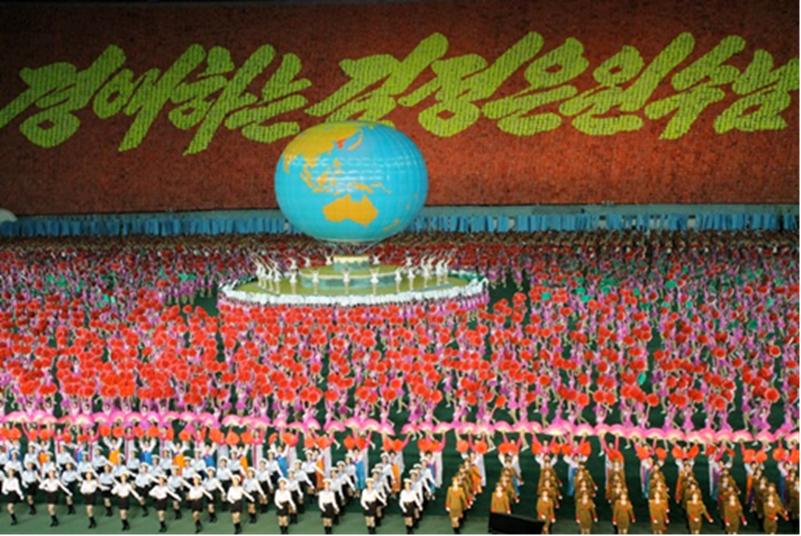 The Mass Games. The writing in the back is on 30,000 hand-held colored cards. Photo by Richard Bangs 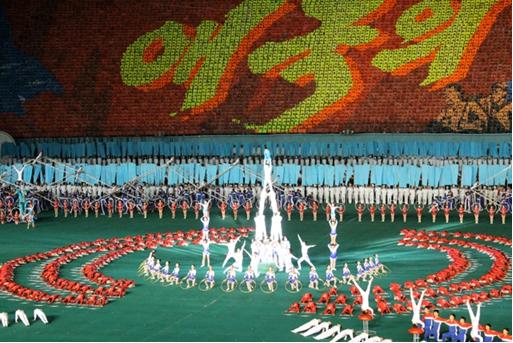 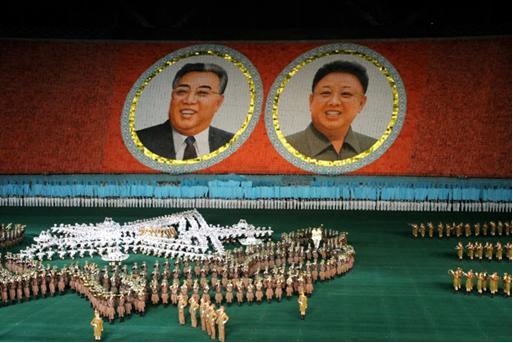 As the sun finds us the morning next we head back to the airport, during the world’s quietest rush hour. One estimate is there are fewer than 30,000 vehicles in the whole of the country. We pass seven cars, several hundred single-gear bicycles, and perhaps a thousand pedestrians, hunched forward as though carrying invisible sacks, walking the edges of the streets. There are no fat people in this parade…all look fit, clean and healthy.

There is no commercial air service to where we are headed (and no Lonely Planet Guide), so we have chartered an Antonov 24, during which the hostess levels her epicanthic eyes and shares she wants to practice her English with us. Good thing, too, as I notice the sign at the Emergency Exit: “In case of stepped out of cabin, attract handle.” 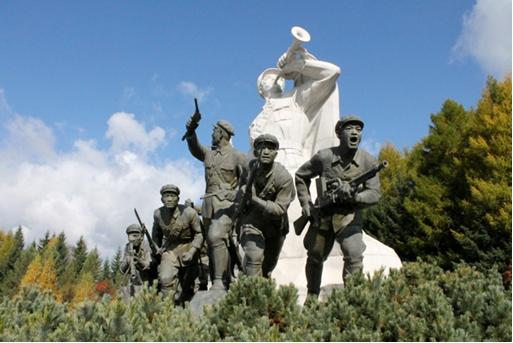 Ninety minutes later we land at Samjiyon, near the “sacred mountain of the revolution,” Mt. Paektu. At 8898 feet, it is Korea’s highest peak, and legend has it is where Korea’s first founder, the mythical Tangun, is said to have descended 5,000 years ago.

The drive from the airstrip to the base of the mountain is an ecologist’s dream, pre-industrial, rice fields cultivated by hand, lush, green landscapes, clear streams, and unlogged forests of white birches. As we rise in elevation, the trees shrink into the soil, until we are in a moonscape, slopes of stones like discolored bone, the flanks of the stirring volcano, Paektu (white topped mountain). This is the sublime hill, the most celebrated in North Korea, and we chevron to the summit in our Chinese bus. From the caldera rim we can look down to a beautiful blue crater lake, a sapphire in the hands of the volcano, and across the lip…to Manchuria. There we see Chinese tourists waving back at us. This is also the spot where Kim Il-sung (Dear Leader) and his son Kim Jong-il (Great Leader) stood, with backs to the caldera, looking commandingly at the camera, offering up enlightenment and guidance. The image is recreated in vivid posters all over the country, so it is a delight to be here, like visiting the setting of an epic film. 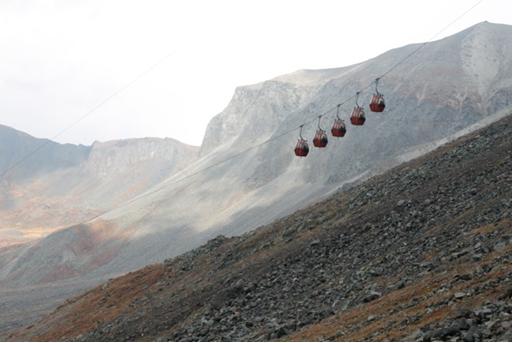 There is a gondola that carries visitors down to Lake Chonji, Heaven Lake, alongside a steep stairway. It’s five Euro each for the ride, but I’m tempted by the exercise, and 40 minutes later meet the group by the frigid water. When Kim Jong-il died, it is said the ice on the lake cracked “so loud, it seemed to shake the Heavens and the Earth.”

We take some photos, walk the verge of the lake, and then ready for the gondola ride back the rim. But the cables aren’t moving. The power has gone off, and nothing moves, even us. The prospect of climbing up is too grim for many in our group, including one woman who has shrapnel in her leg from a recent visit to Syria. So, as tempers and temperatures rise, and I consider what it would take to carry someone on my back, the power lurches back on, and the gondolas open their doors for the ride to heaven.

The afternoon presents a personal surprise…we drive to The Secret Camp, where Kim Jong-il, our guides tell us, was born in Japanese-occupied Korea on February 16, 1942. His birth was foretold by a swallow, and heralded by the appearance of a double rainbow across the sky over the mountain, and a new star in the heavens. The simple log cabin (with roebuck deer hooves as door handles) of this auspicious birth stands near a stream called Sobek, spilling from its eponymous mountain. It turns out Sobek means “small mountain” (compared to Paektu). Sobek is the name of the adventure travel company I founded quite a few years ago, but it was christened after the crocodile god of the Nile, not a waterway named for a mini-me mountain. Nonetheless, our hosts are excited with the coincidence; I am honored just the same. We take the night at the cavernous Baegaebong Hotel, which could be the set for The Shinning, though we are the only guests. Nearby are the wide and scenic Rimyongsu Falls, spouting gemlike from a basaltic cliff, and there is a ski slope next door. But this is fall, so the assumption is we are off season, or tourism hasn’t lived up to expectations yet. 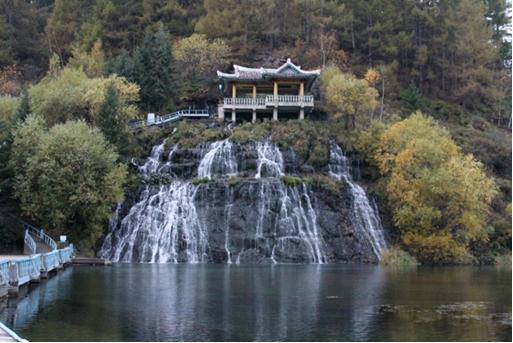 Look for Part 2 and 3 of this North Korea series next Monday!