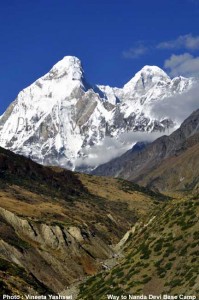 Trekking for Milam Glacier and Nanda Devi East Base Camp, India were my dream trek, which now come true.

One chilly morning I headed to Pithoragarh, which is a beautiful place where I spent night. Next morning I left to Munsyari. Route was blessed with lots of waterfalls, as the rain season just ended. 4 a.m. I reached Munsyari and met with my guide and crew.

Next morning I got golden view of Panchachuli. I went for a walk to enjoy morning view of Munsyari. Around 10 am, I start trekking. From Dhapa it was steep descend with rocky path. I walked till Jimigar, where I met River Gori. Now I had to follow the river. I crossed Jimigar through the bridge and took steep ascend for Lilam. Ascend become difficult because of blazing sun but I found beautiful waterfalls and caves. Trail was treacherous and Gori was flowing down. My little error could be through me into Gori. Around 2 p.m. I reached at Lilam (1850 mt.) pitched tent in a beautiful location and had lunch with local people. At night, after dinner, I retired to sleeping bag. 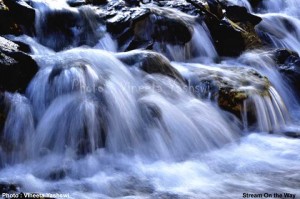 Next morning I headed towards Bogdiyar (2450 mt.). Big lizards were playing hide-n-seek here. This valley known as Johar Valley and people are traders and nomad. They migrate towards Munsyari in winter. Massive waterfalls were appearing on the trail and Gori following us with roaring voice and huge rapids. Though ascends were hard-hitting but I was astonished by the beauty of valley. I crossed bamboo jungle, caves and temples. In one temple, I saw snake’s fossils. Villagers pray here for safe journey. Around 1p.m., I reached Rangari village and then Garampani, which gets its name from hot water spring. I set here dipped foot into hot water. After refreshing break, I finished lunch at hotel. In these small hotels, you can get tea; food and space for night. It was dark when I reached Bogdiyar. Bogdiyar was cold but sky was shining with stars. 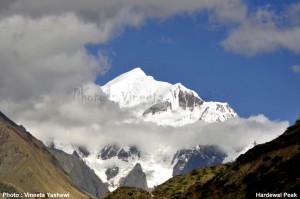 Next morning I left for Martoli (3430 mt.). In the start trail was easier but suddenly it became strenuous. Massive mountains, blue sky were enhancing the beauty. After steeper ascend I reached Laspa village. Now tree line had been vanished and Bugyal, huge meadows, appeared. I reached Rilkot village after 2 hours. It’s evening now and I was exhausted but still had to cross steeper ascend. When I reached Martoli it was dark. I roamed around. Broken houses were giving ghostly feeling and it was chilly also. Two men came and gave me place to pitch tent.

Morning it was frost all over. I went towards Nanda Devi temple and village. Martoli situated on the Indo Tibetan trade route, which has closed since 1962. Now most houses have been broken. Traditional architect of the houses attracted me a lot. After this walk, I headed towards Ganghar. 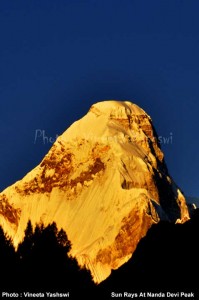 I took treacherous descend for Ganghar (3328 mt.). I crossed Burfu village. Except one steeper ascend the trail was easy but winds were blowing fast. When I reached Ganghar, ladies started dance holding mobile. Here I made base camp for Milam Glacier and Nanda Devi East Base Camp.

Next day, I headed towards Milam Glacier (3500 mt.). After crossing Pachhu village I saw confluence of Gwankh River, which comes from Tibet and Gori River. Through the makeshift bridge, I crossed Gori. One strenuous climb made me exhausted but when I saw Hardeol Peak I felt relief. After little trek I saw Glacier but wanted to see it close so moved on. Trail was nowhere. I was making way through the pile of stones. Place was like natural stone crasher. After crossing rocky way, I was in Milam Glacier. My dream had been true. Moment was emotional; I set down and felt the presence of Glacier. Now time to go to the snout of Gori. Though area is risky but I moved on. Stones were falling here so I paid my obeisance to Gori and got back. Here I felt the force of nature. I went to Millam village which is largest and last village of India border. By the evening, I backed to Ganghar. 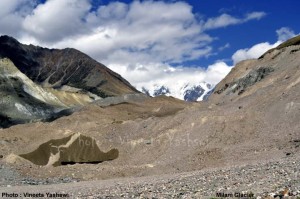 Next morning I saw magnificent view of Nanda Devi and I set out to the Nanda Devi East Base Camp (4297 mt.). It was very tough ascend. Trail became steeper and narrower. When I saw glimpse of Nanda Devi twin peaks I walked fast but I was struggling. Here I saw Rhododendrons bushes and Bhojpatra trees. In ancient time, people wrote letter on Bhojpatra (Himalayan Birch) sheets. From Base Camp, I saw full view of Nanda Devi. I stand here and forgot everything. I utterly fascinated by the magic of goddess Nanda. After spent terrific time, I turned back…

About the Author: I am Vineeta Yashswi from India. I love photography, travel and trekking. Follow me on my blog, My Nomadic Experience.

Revolution 2020: Does Life Imitate Art?
Colombia: Free Yourself From Yourself
Bodh Gaya,serenity and awakening in India
Covid Relief to India through WHEN: World Health and Education Network