India: Guests at a Wedding in Travel Longer Magazine

Thank you to Travel Longer Magazine – The World’s Premier Extended Travel & Photography Magazine for including our article about India, “Guests are like Gods at an Indian Wedding,” in their magazine! 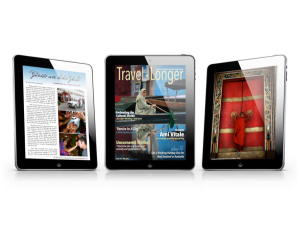 FREE THREE MONTH SUBSCRIPTION
to Travel Longer Magazine
code:  wesaidgotravel  (all lower caps, no spaces) expires at midnight, Friday 28th June.
This is for the iPad only.
Other platforms coming soon!
If you  need help with the subscription code, go to: http://travellonger.com/code  for details.
The article begins: Being raised in Los Angeles, California, I always knew that dreams could come true, at least in the movies. At times I have to pinch myself, realizing that my own personal fairy tale has come true by meeting George online, quitting our jobs to travel for a year, and getting engaged underwater. Imagine my surprise to suddenly witness a scene that I thought could only happen on film in the beach town of Puri, Odisha, in Eastern India.This area is known as one of the poorest sections of India with the lowest literacy rates; however, none of that matters during wedding season. No costs are spared during these multi-day extravaganzas. One night, we heard a marching band performing live down below our balcony. Wandering down a side street to investigate, we wondered, “Is this the Sea Beach festival?” We were told that there would be classical and folk dancing as well as late night and early morning fire works.The band carried a large gold banner and wore golden shirts and matching hats rimmed with red decor. Then we saw him, decked out like a Disney dream on steroids, a groom resplendent in a white wedding suit perched upon a jeweled white horse. Had we just stepped onto the set of a Bollywood film? No, this was reality. The music and the groom perched upon the horse with tears in his eyes were genuine. The groom turned and saw us taking his photo; we said, “Congratulations!” and he waved

One response to “India: Guests at a Wedding in Travel Longer Magazine”