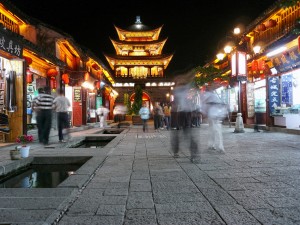 During our first sabbatical year, George and I traveled to several places I had always wanted to see like the Xi’an Warriors in China. After college in 1990, I studied ceramics for several years and learned to throw pots in Golden Gate Park, San Francisco. I took class on Tuesday mornings with an incredible group of artists and grandmothers. They adopted me and at lunch often would discuss my latest date, job decision or other issue in my family. Dottie took me to her tailor when my dress for my sister’s wedding arrived but did not fit. She also taught me about Chinese brush painting and the Xi’an warriors.

Traveling in China independently in 2009 led to several language problems. We carried a wordless book with us and attempted to learn to speak. In Kunming, a man was cooking meat kabobs on the street and we pointed to our pictures of a cow, pig and lamb. He pointed to lamb and said “Chuggah.” So we went happily on our way believing we had learned a new word.

We entered a local store to buy ice and sodas. We could not find ice so we pointed to the photo of ice and the lady said “Chuggah.” That did not seem quite right. How could “Chuggah” mean lamb and ice? A kind gentleman intervened and explained that the store did not sell ice and “chuggah” means “this one.” We had many other humorous moments during our six weeks of travel as well as discovering many fantastic sites like The Great Wall and Three Gorges.

I can highly recommend travel in China and would understand that many feel the language barrier is too much for independent travel.  My friends who live in Beijing have recommended Wendy Wu China Holidays as a great tour operator. We noticed that many Chinese travel in groups in their own country. I found that surprising since they understand the language! 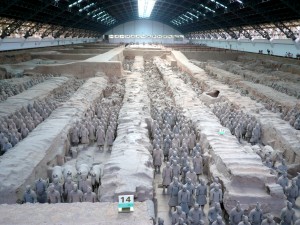 As for the Xi’an warriors, when we arrived I was so excited to have my dream come true of seeing them that I simply jumped up and down! George remembers:

“The visual highlight was Pit 1. Nonetheless, the actual story behind the terracotta warriors was even more intriguing. Qin Shi Huang, the First Emperor of China, had an army of life-size warriors fabricated to battle with him in the afterlife.  These artifacts, produced around 210 BC, were not discovered until 1974; local peasants who were searching for a new well site accidently unearthed the archaeological site. The terracotta warriors varied in height depending on rank, generals being the tallest. Since the excavations had commenced, warriors, chariots, and horses had been uncovered. The estimated quantity of warriors in the three pits amounts to eight thousand soldiers, one hundred and thirty chariots, and five hundred and twenty horses. Inconceivably, the majority of these estimates still lay below ground. In fact, Pit 1 was impressive because of the massive quantity of warriors that had already been uncovered. Pit 3, in contrast, was relatively small. Pit 2, although massive in size, was only excavated in one small section. Only in Pit 1 were hundreds of terracotta warriors visually lined up and prepared for battle.” Excerpt from Traveling in Sin, our memoir of our first sabbatical in Asia.

If you travel with Wendy Wu China Tours, you will be able to see many of the sites we discovered but might not have as many funny language stories! I hope that as 2013 comes to a close you are happy with your year of risks and adventures and if you have yet to see your dream site in person, you plan a trip for 2014!

Sunshine Girls Walking Tour of DTLA
We Said Go Travel says, "THANK YOU!
SCIENCE FAIR: You don't have to FREAK OUT!
Who is the Adventure Correspondent on The Jet Set?