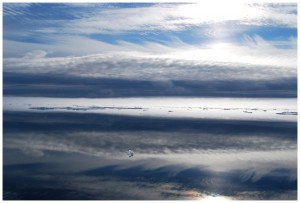 The Northwest Passage is located in the High Arctic that which spans across the entire North American Continent from the Pacific to the Atlantic Ocean.

The passage itself comprises of an intricate string of water channels that are mostly frozen solid allowing only the largest icebreakers possible access. However, during the brief Summer, the ice sometimes melts enough to allow for a small vessel to pass through.

There have been only 159 transits in total known to have made it through the passage to date; working on a world cruising icebreaker of 126mtrs, I have had the privilege to make such a journey.

I want to describe just one day, quite possibly one of the most spectacular days of my life…

Can you imagine the silent feeling of nothingness? Of blackness… Of brightness… Of stillness?

I imagine this is what an after life – if one were to exist – would be like. Perhaps slightly eerie at first, perhaps close to scary, dealing with the unknown, however I imagine it would be altogether marvelous at the same time.

It was approximately 11am in mid August 2010.
We were deep into the passage and due to the incredible fog outside; we were erring on the side of caution, taking to traveling at the slowest speed possible.

Icebergs are mapped out on our navigational system, however, there have been many shipwrecks partly due to poor mapping and partly to the fact that seven eighths of an iceberg is not known as it’s actually below the surface…

With that being said, we weren’t taking any more chances then we had to.

I remember having the urge to walk outside and as I stepped out I felt the instant stabbing cold on my face, whilst that wonderful aroma of salt surrounded me, stringing through the air. Outside already was our local Inuit guide, a kind natured elderly man who had been born and raised in a small Inuit community village called Resolute. He had over 50 years of hunting experience and knew these waters and this land better then most.

Although I could just make it out, he had a strange smile on his face; that I remember clearly. But yet, I put my hand in front of my eyes and due to the dense fog; I was unable to see it.

The most amazing thing was – there was an absolute of no wind. There was no breeze, no movement. The air felt like it stood still around me. There was not one noise in our surroundings; the only sound you heard was our vessel inching its way further and further at no rate at all, through the passage.

And then – a small glimpse of a phenomenon occurred.

The fog, for perhaps a total of 30 seconds, lifted. Completely.
What we were looking at, we had no idea. Our Inuit guide turned to me with that strange smirk and said, “this will be the most special day of our lives, we are witnessing heaven.”

I do not know the religious background of the Inuit communities, I myself am an atheist, however, if I can imagine heaven being anything, then I can imagine it was this.

You could not tell where the horizon was – where the sky reached the water – everything was upside down and perfectly mirrored.

It was chillingly beautiful.

Within a matter of seconds though, back came the fog, as thick as it was when it left us.

The strange thing was, with it came the wind and a howling like no other, like we were being tortured for laying our eyes on something only nature should have seen.

The feeling I had that day has lasted with me ever since – I can’t explain it. But I know, our Inuit guide was right; it was one of the most special days of my life.

ABOUT THE AUTHOR: Rebecca McKeever: Leaving Australia a few years ago, I’ve spent my time smiling at the awe-inspiring beauty of the world we live in. Traveling has become my glow, my happiness, my life.

Kassel, Germany: When Too Much Art is Barely Enough
I am grateful, for the beautiful people of Malawi.
English Corner: Shenzhen's Undiscovered Gem
Santorini, Greece: Spilt Paint