Guatemala’s Children: From Forced Labor To The Classroom 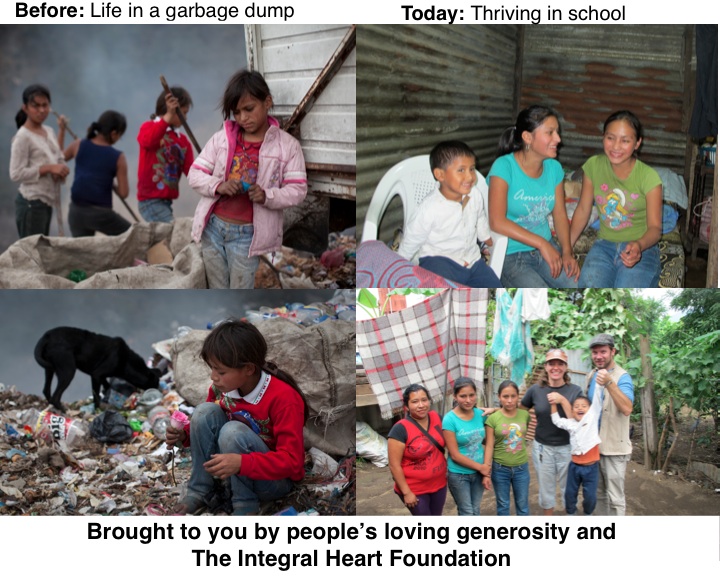 From Forced Labor To The Classroom:

Today, everyone reading this has an opportunity to not just travel the world, but make a difference in the lives of those in need they encounter along the way.

It is difficult to believe that I first met Maria and Carmen four years ago. It was my second year as director of a development project in Guatemala and though I had seen a lot, I had not been prepared for the realities a visit to a garbage dump near the foot of the volcano Acatenango. A friend in colleague who ran the projects anti-human trafficking program first brought me there in his effort to help break out two families from their forced labor situation.

The garbage dump was perpetually on fire due to spontaneous combustion of chemicals trapped deep below. Above the roaring volcano let out occasional rumbles followed by a dusting of ash. “Hell,” my colleague called the place. But if this was hell, what had these children before me done to get here?

Amid the noxious chemicals, a half dozen children, shoeless and clad in rags, were collecting garbage. Every day during daylight hours they were sent into the refuse to salvage plastic bottles and aluminum cans, earning on a good day around forty cents.

Over weeks, months, and then years, the program I represented was able to take some of these children in and put them in school. Without that intervention the children likely would not be with us today, would still be in the garbage dump, or would have grown older and been put into the even more vicious sex trade.

The years they spent in the project were at times a trying change for them to adjust to, but it was ultimately successful. Maria who attended school on the same grounds where my office was often appeared timidly at my door. I was perpetually busy, but always stepped away from my work when she came. We would color with crayons and talk. I remember in particular when my parents came to visit the warm embrace she gave my mom, overcoming her shyness for an instant. We promised these girls one thing, that if they continued to study, we would continue to support them.

After four years in the field, I returned to the United States to put writing on the front burner, while continuing to support development efforts when and where possible. I am not privy to the details of what led to them leaving the project. I do know that the anti-human trafficking state department grant that my colleague had procured was not renewed after our wake.

I doubt decision to discontinue promised ongoing support would  have been made were there other options. But whatever the reasons may have been, Maria and Carmen, after three years of schooling, were back out on the streets. That news felt like a line from Rudyard Kipling’s poem, to watch the things you gave your life to, broken.

Thankfully is not strong enough a word, but I’ll use it. Thankfully, in the end, this work was not broken and Maria and Carmen were not lost to the streets. Today they are supported in their home life and studies by a charity I have been close to since they were founded: The Integral Heart Foundation. Their simple model of “Nourish, Learn, Socialize, and Transform” is working. They continue to work to grow so that their efforts can continue to make tangible and sustainable differences.

Development is not about “saving people” it is about evening the playing field and giving children like Maria and Carmen the tools that they need to have the choice to do more than merely survive. Maria and Carmen have made their own decisions that they want to study to get an education and live a life where survival is not a daily struggle.

You, the reader, are part of a generation that is thirsty not only to experience the world, but to use its advantages to help ensure that the world does not forget about people like Maria and Carmen. The starting premise of philanthropy is that human beings do not just have the inner desire, but also possess the inner ability, to help reach out and help children like Maria and Carmen. You have this ability.

This giving season, this site is taking part in the Travel Bloggers Without Borders campaign to raise enough funds to provide education for 55 children in Guatemala such as Maria and Carmen. By clicking through (and asking others to do the same) and making a donation of whatever you can ($1, $15, $25, etc… ),  you contribute in a very real way to changing someone’s life.

Please help us by spreading the world and making a donation today. Don’t just travel the world; help make it a better place for everyone!

About the Author: Luke Maguire Armstrong (TravelWriteSing.com) once fought a bear and almost died. Haters later claimed it was “only a raccoon” and he was “acting like a baby.” Luke took offence to this, since he used to be one. When he is not being mauled by animals, Luke is an author and travel writer who has spent the last five years working in human rights and development from Guatemala to Kenya to The Bronx. He is the author of four books, including “How We Are Human” and “iPoems For the Dolphins to Click Home About.” Follow him @LukeSpartacus and he will sing you songs.

Global Angel x Adrienne Bankert: A Partnership to Spread Kindness and Provide Helping Hands
A Mexican Adventure Part 3 – The Backstory and the Myth of Agua Azul
I Grew my Boobs in China
Adventure Matters: Sometimes You Have to Eat It to Save It!

One response to “Guatemala’s Children: From Forced Labor To The Classroom”