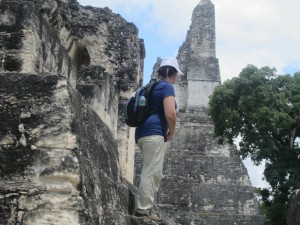 I was leery of the small plane waiting to whisk us to the ancient Mayan ruins of Tikal. I am not a fan of heights and tolerate air travel only because I love visiting far-flung places difficult to reach any other way.

My sister and my niece grabbed their backpacks and dragged me forward. It was early morning, the sun shone and was already getting hot. We walked across the tarmac and boarded the plane.

The flight across the mountains and forests of Guatemala was beautiful, unhindered by the poor streets, highway bandits, and poverty we would have encountered along the road. Soon we were once again outside, squinting, getting accustomed to the light and searching for our tour guide.

Our guide Enrique enthralled us with tales of the ancient capital city, the Mayan people, and the land encompassing Tikal National Park. As we drove the van passed under a canopy of trees shielding us from the blinding sun. The park seemed devoid of activity, but it covers a huge expanse and the few people around were spread far and wide.

Walking through the thick jungle, our Mayan guide transported us back in time. We started to visualize the place as the center of a vibrant civilization, with a population at its peak, during the eighth century A.D., estimated as high as 120,000.

Some buildings are excavated, but most remain totally or mostly covered with a thousand years of jungle growth. Remnants of buildings poke out between trees, hinting at past greatness. Workers have carved wide walkways from the ruins of age-old roads.

Civilizations rise and fall for a variety of reasons. No one knows why Tikal declined, but speculation includes a combination of overpopulation, a series of agricultural failures, and wars lost. The city was abandoned before the twelfth century.

Local folklore remembered the grandeur of the past, and the overgrown, covered pyramids, temples, monuments and residences were rediscovered by the outside world in the nineteenth century.

Walking in the intense heat and climbing pyramids was exhausting. Only Enrique’s monologue and our whining about the heat broke the quietness.

We stopped in a clearing, taking shade under trees while our guide explained the buildings surrounding us, pyramids constructed in a design that gauged and emulated the seasons. A couple of low tables displayed small bouquets of fresh flowers and votive candles. Enrique explained this was a sacred place to Mayans. The people come to pray and leave tokens for their ancestors and deities.

Suddenly there was total, complete silence. A couple of birds cooed, a low sound breaching the stillness but not the peaceful atmosphere. Not a leaf stirred.

We looked around, observing the tall gray stone pyramids defining the clearing. We could almost see long-robed priests moving back and forth along the path between the structures.

The sound of a lute-like instrument unexpectedly broke the silence. Our guide had taken it from his pocket and began playing a slow, mournful tune.

After several minutes the music stopped.

“My grandfather taught me that song. He learned it from his father. It is a song of my people reaching back many, many generations.”

And then Enrique jolted us back to the twenty-first century.

He broke out singing an enthusiastic rendition of “Havah Nagilah,” a Hebrew folk song meaning, “let us rejoice”. A Mayan entertaining us with Israeli music in the midst of the Central American rainforest was mystifying.

Enrique had never left Guatemala. Where did he learn the Hebrew song?

“We get a lot of visitors from Israel. A group of young Israelis taught me the song. Now I love to sing it here.” The song resonated throughout the clearing.

Enrique finished, smiled and moved us along. We walked into what was once the main plaza.

Our imaginations took over. Weeds disappeared and the dislodged stones became roads, terraces and buildings, the disheveled wilderness transformed. A bustling metropolis emerged with people milling about, children playing ball and calling to their friends, vendors selling food and trinkets, and carts arriving from throughout the empire filled with merchandise, people, and news of their world.

A dead, long-buried city, crowded with ghosts of the past, messed with our minds. Their spirits spoke to us and we tipped our sun hats to them.

Our guide’s ancestors reached across centuries to their Mayan descendants, exhorting them to remember and be proud of their legacy.

We flew home a couple of days later, wondering about our civilization’s legacy and, centuries forward, who will remember. And what will they remember?

About the Author: I am a freelance writer and blogger enjoying a new flextime career after fifteen years in the financial field. I love the freedom of writing about anything that interests me, including and especially travel and food. Check out my blog Six Decades and Counting.